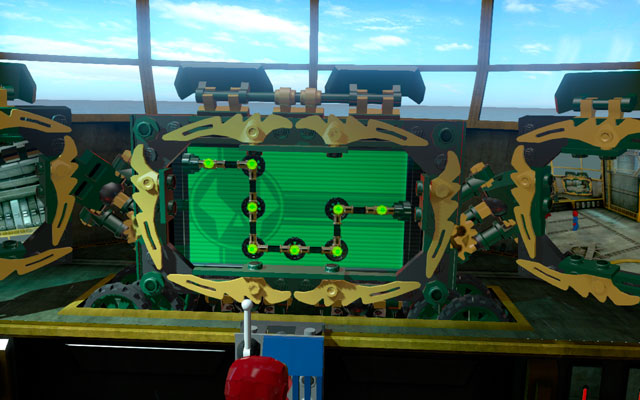 Enter the boat, then kill all enemies stationed in the area. Demolish all objects lying on the left side of the room, then build a computer from the debris. Use it as Iron Man, so you can arrange the pipes in the pattern showed above (you must create a connection between two power points). 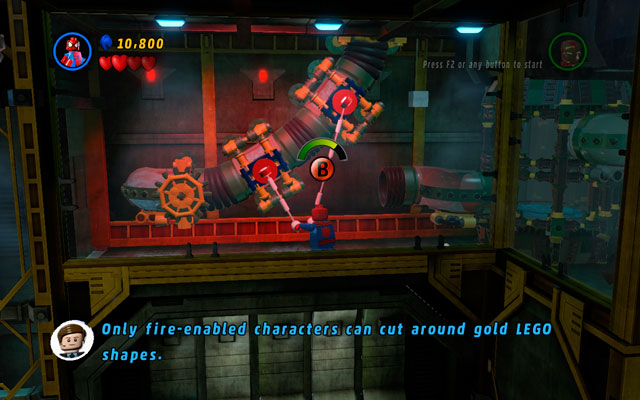 When it is done, approach to the golden wall and slice it with your fire beam - in this way you will create a proper passage to the next room. Enter it and switch into Spider-Man to use his spider sense. Climb up, then use your instincts once more, uncovering two attachable points. Now just yank them. 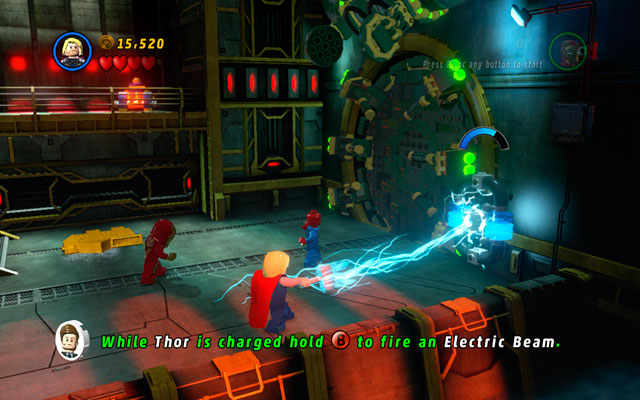 Jump down and approach to the burning barrels. Use spider sense to unlock an attachable point, then pull it with your web. Wait for flames to become extinguished, then destroy all barrels and build a battery from the debris. Charge it with Thor's hammer (interaction button) and go to the next room. 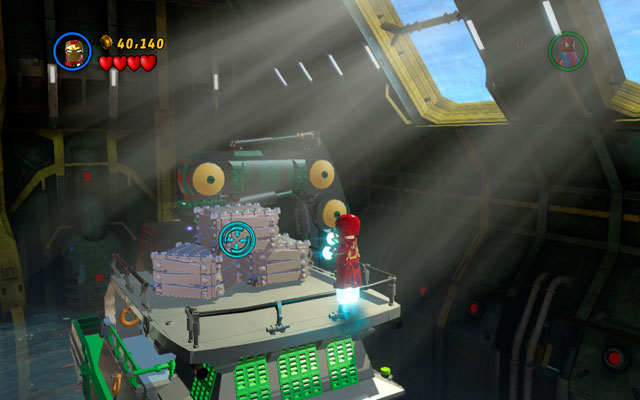 Defeat another group of enemies, heading to the right side of the hangar. Approach to the boat with silver boxes lying at it, then destroy them using Iron Man's rockets. After that charge Thor's hammer once more and electrocute uncovered battery. Now switch into Spider-Man and use his spider sense to uncover two attachable points placed on the container. Yank them and build a computer from the scattered bricks. 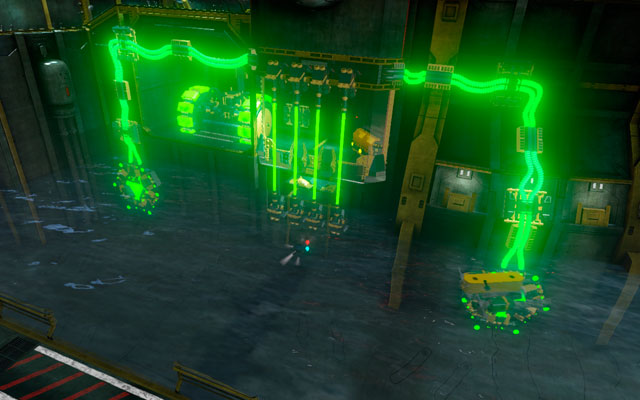 Use the device as Iron Man to take control over the submarine-robot. Now you must touch two buttons located on both sides of the laser gate. When it is done, you can go to the room that you've just unlocked. 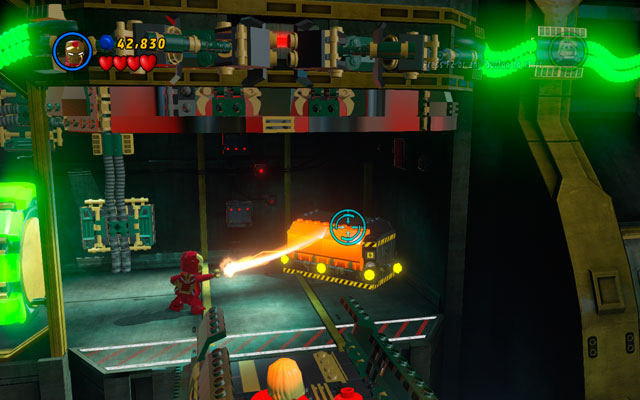 Melt golden box on the right side of the location, then build a battery from the debris. Charge it as usual and wait for explosion to occur. After that you can go to the corridor on the left. Notice that in the following location you will fight with M.O.D.O.K. - so prepare yourself. 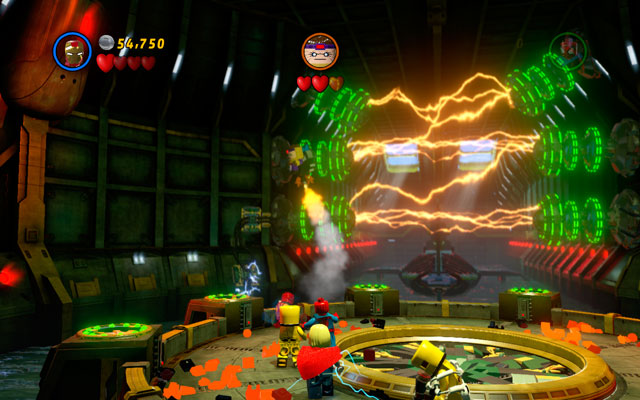 At the beginning of the duel M.O.D.O.K. is invincible - so fight with his minions for some time and wait for the malfunction of the enemy's shield. When it occurs, switch into Thor and throw your hammer at the villain, so you can hit him during conventional melee fight. After first hit, the criminal will jump to the water - so you must spend some time struggling with his troops.

Notice that the whole sequence described above must be repeated for three times - only then the talking head will be finally vanquished. 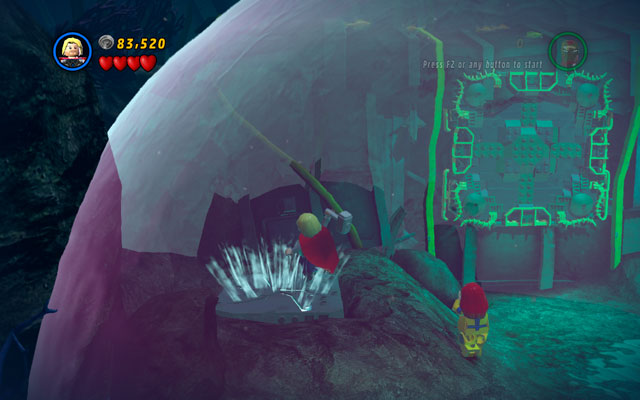 After the fight you will be moved to the next location - underwater. At the beginning destroy the vessel lying on the left side, then build a lock from the debris (only Thor can do that!). Then approach to the gates and use spider sense to uncover an attachable point. Yank it and you can go to the further part of the stage. 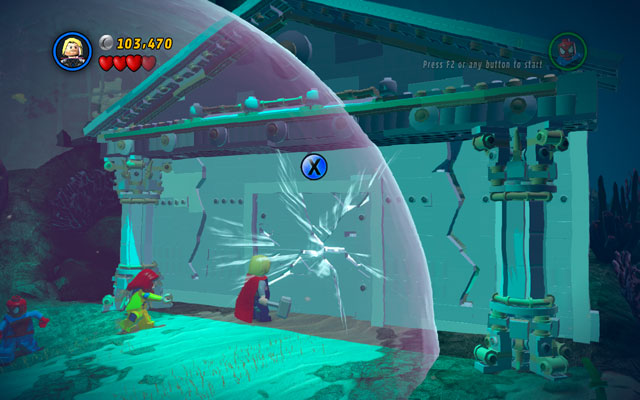 Go forth, reaching to the sunken building. Use spider sense once more, uncovering an attachable point. Pull it with your web, so you can see a crack on the construction. Smash it with Thor's hammer to clear the way, then defeat some enemies. 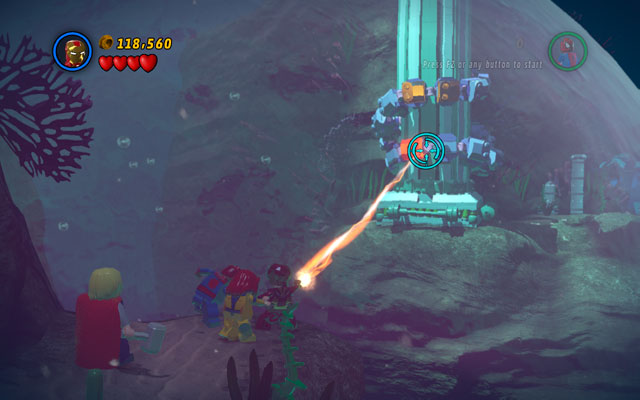 The way to the next part of the location will be blocked by the wall with a silver manhole. Blow it up using Iron Man's rockets, then hit another crack on the building with Thor's hammer. After that you can approach to the tentacle and melt golden chains attached to it. Now you should use spider sense to uncover two attachable points and yank them, so you can go forth. 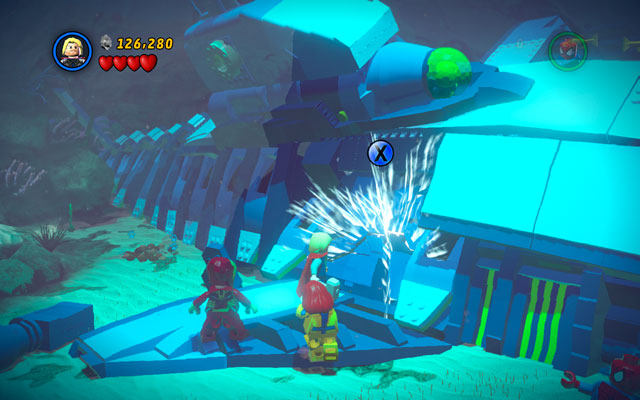 Reach to Doctor Doom's submarine and defeat all enemies hidden there, so you can finally smash the crack located on the vessels surface. Hit it with Thor's hammer to end this level.