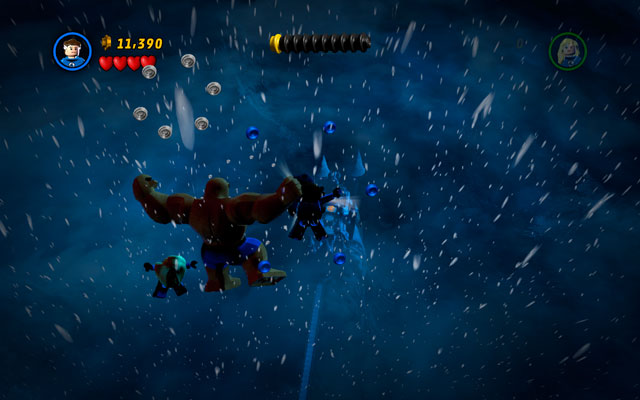 After the beginning of the mission you will fall down - it is a perfect occasion to gain some studs, and even a minikit. 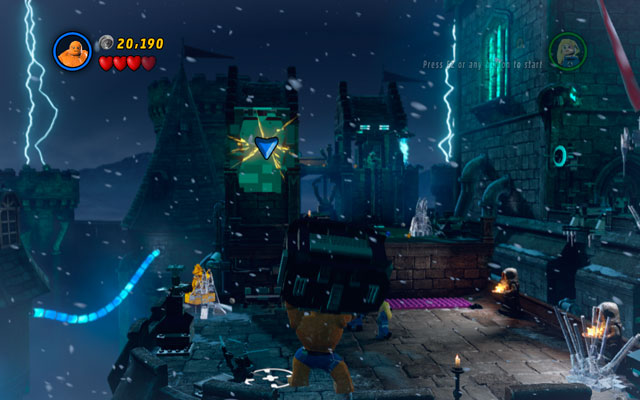 Land at the one of the castle towers, then fight the enemies crowded nearby. After that you should destroy all objects standing on the left side, building a huge container from the debris. Then switch into the Thing and lift the box using green handles, so you can throw it at the fragile part of the tower. 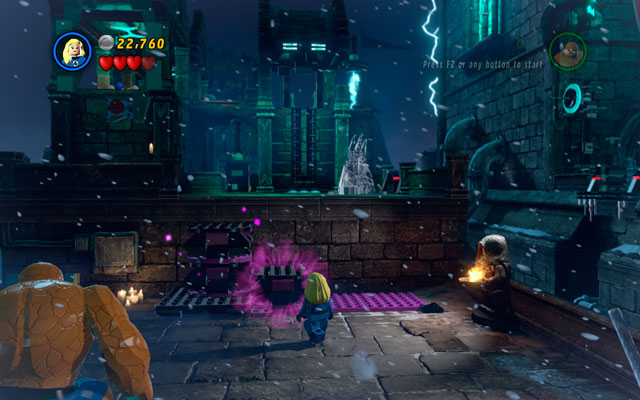 When it is done, destroy other objects lying in the area, then switch into Invisible Woman to build some violet bricks from them. Now you must use her telekinetic skills to arrange columns into a stairway to the next floor (see screen above). 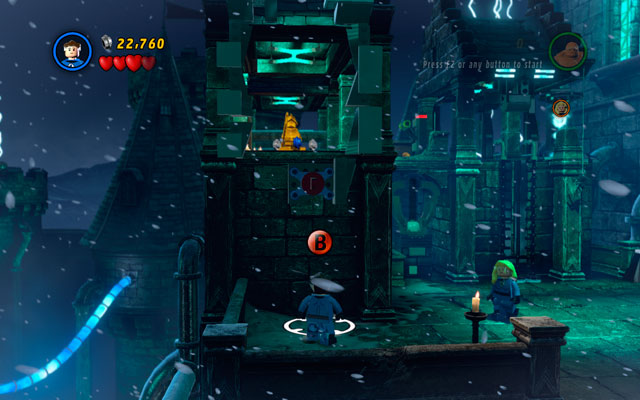 Go to the upper level, then turn left and choose Mr. Fantastic. Grab an attachable point using your elastic skills to climb on the tower, then head to the right, so you can switch the computer on. In this way you will create a ladder - climb it with Invisible Woman to go further. 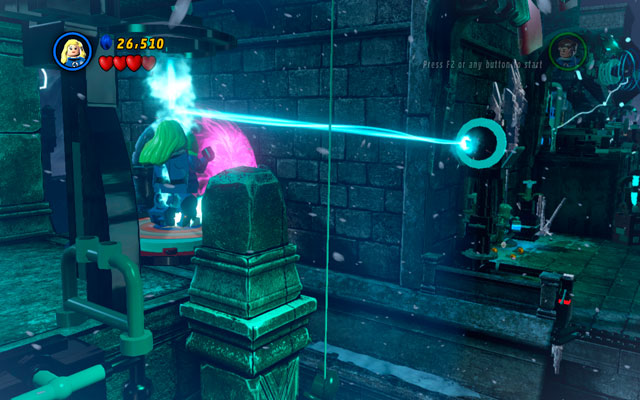 Approach to the lightning on the right and reflect the beam to the plate on the opposite side of the gap (use an interaction button while standing on the Captain America's panel). Now you can pass through the bridge. 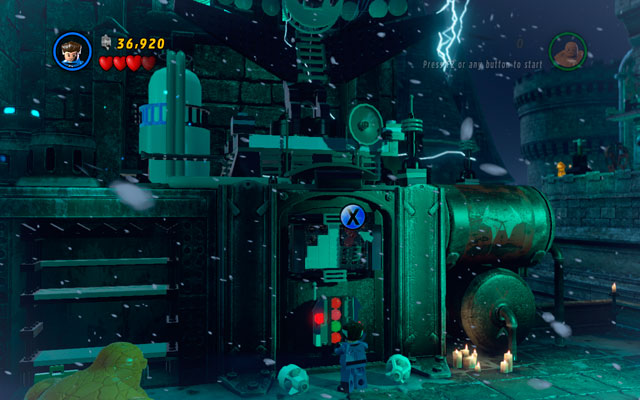 On the new location defeat all enemies, then choose the Thing and yank two green handles placed on the wall. Scatter the bricks, then build a Fantastic Four panel from them, so you can use it with Mr. Fantastic. After that switch on the computer and disconnect the jamming machine - to do that, you must click on the X symbol at the top of the screen. 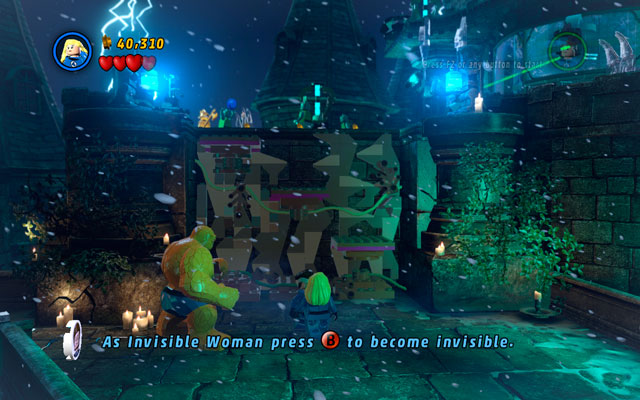 After that approach to the wall glowing in yellow and break it with the Thing. Then switch into Invisible Woman and use her telekinetic skills to arrange three columns into a stairway to the next floor (see screen above). 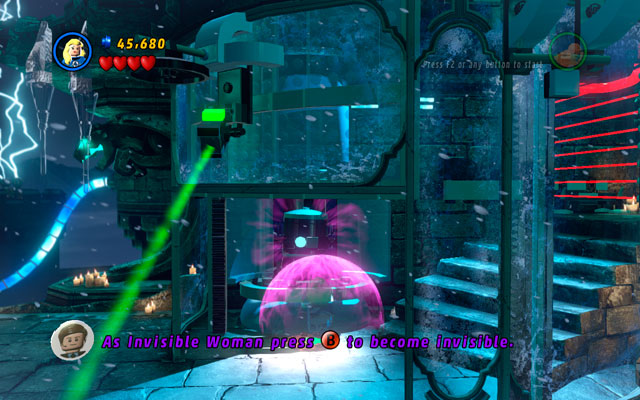 Defeat all opponents, then switch your invisibility skill on to pass through the gate covered by cameras. After that use telekinesis to move a gas cylinder from the lower to the upper floor - you will receive some useful bricks in that way. 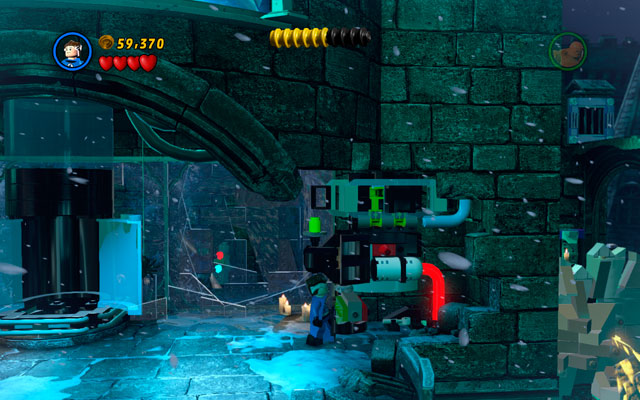 Choose Mr. Fantastic and approach to the front of the building, then climb on it using an attachable point. Kill all enemies, then build a lever from the bricks that you've already scattered. When it is done, push it, so you can go to the further part of the castle. 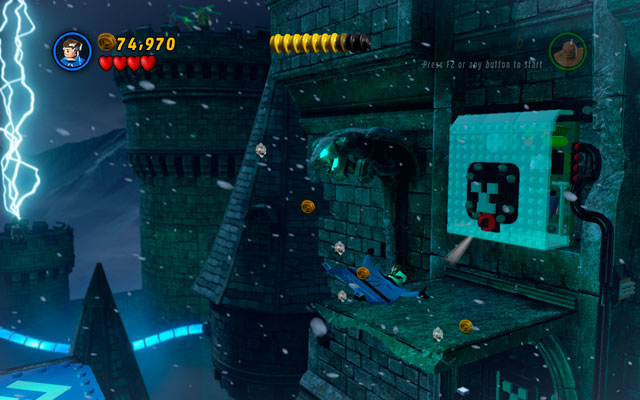 Switch into the Thing and break through the yellow wall. When it is shattered, move indestructible barrel as Invisible Woman to clear the way. After that choose Mr. Fantastic and pass through the window with iron bars, so you can approach to the gap and glide over it. 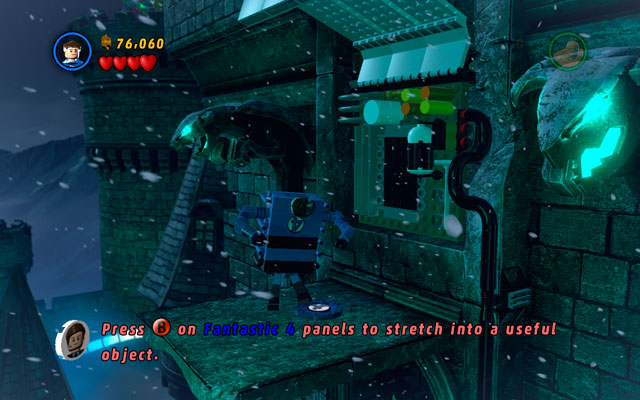 Yank an attachable point to scatter some bricks. Then build a Fantastic Four panel, so you can use it. When the way is cleared, you can go to the next part of the castle. 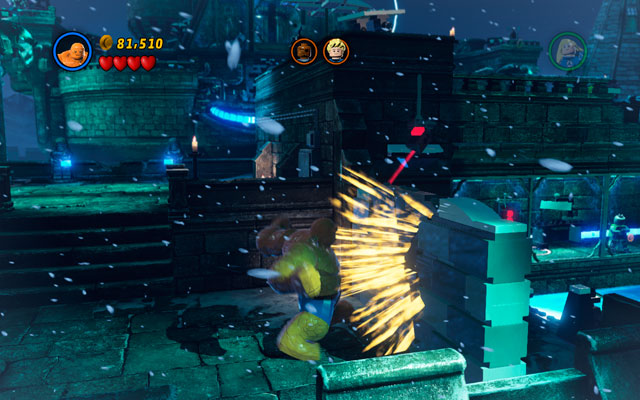 Defeat all opponents, then switch into the Thing and collapse the wall on the right. In this moment Doctor Doom's minion will turn the bridge off - you must choose Invisible Woman and use her invisibility power to avoid the camera. 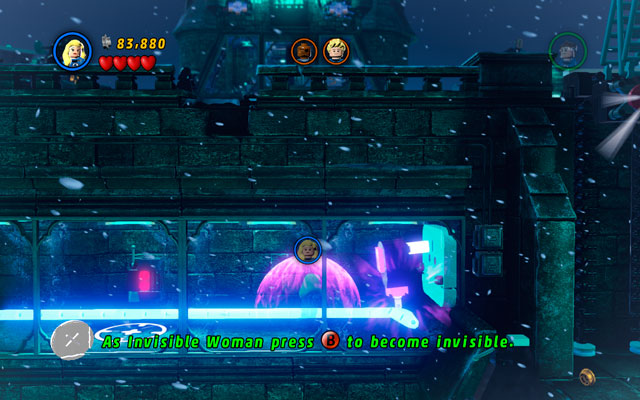 Enter to the control room and kill an enemy, so you can put a plug out from the socket - in this way you will turn the camera off. After that you can switch into Mr. Fantastic, who should use a computer to bring the power supply back to the bridge. 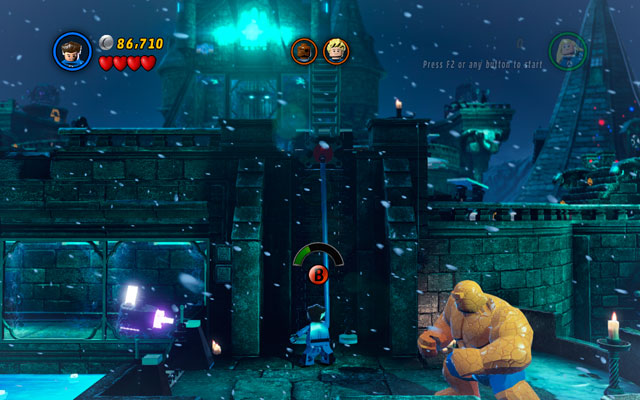 Stand on the other side of the gap and extend your arm, so you can pull an attachable point on the ladder, lowering it down. Now go to the higher level and crush all enemies. When it is done, approach to the huge rock lying in the centre of the tower and destroy it. After that you can build a Captain America's panel from the debris. 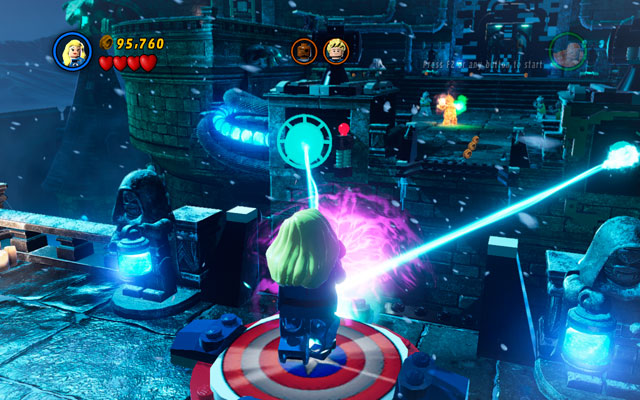 Choose the Thing and lift up a crate with green handles (it is standing on the right side of the roof), then throw it at the pillar on the opposite side of the gap. Wait for laser ray to appear, then switch into Invisible Woman and stand on the Captain America's panel to reflect a beam to the plate placed on the left. In this way you will create a passage to the further part of the castle. 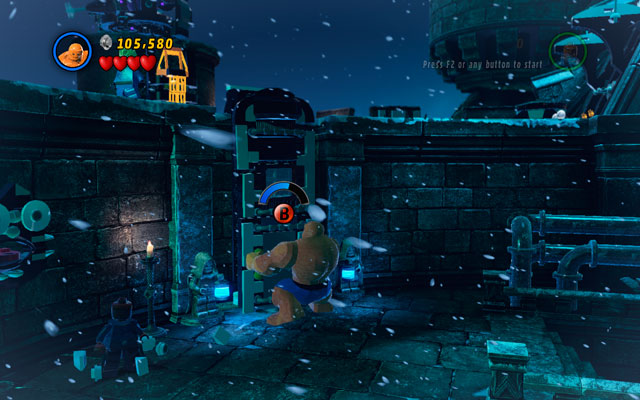 Go to Human Torch, then switch into him - only then he will be considered as "rescued" by the game. After that turn to the left, and lift up the wall with green handles, using Thing's unnatural strength. When the ladder appears, climb on the wall and meet with Nick Fury. 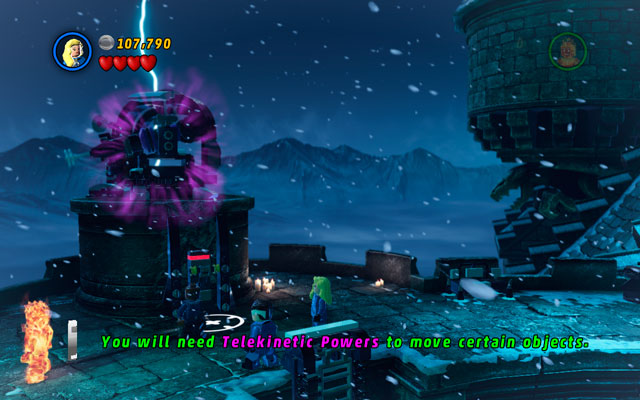 Melt golden gate using Human Torch, then switch the lever on. When the laser beam appears on the top of the tower, rotate it with telekinesis - then use a switch once more to clear up an entrance. 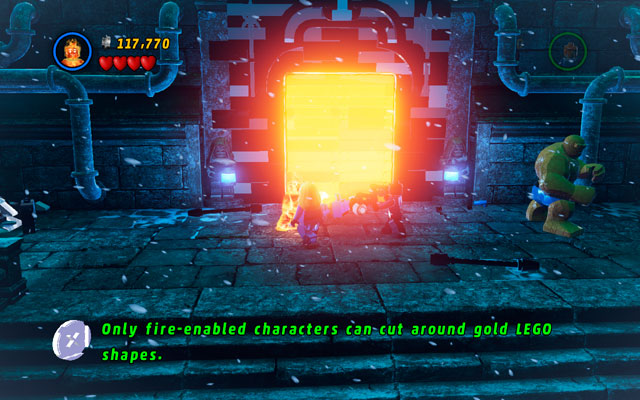 Defeat all enemies and approach to the golden wall. Melt it with a fire beam and go to the arena with Green Goblin hidden inside. 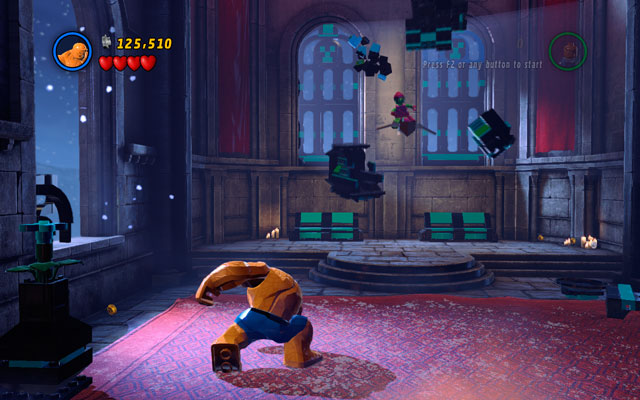 Kill all minions, then go to the central part of the arena and turn to the left. Build a huge rock with green handles from the debris, then lift it with the Thing and throw it at Green Goblin. Wait for him to go down, so you can easily make some boxing exercise. 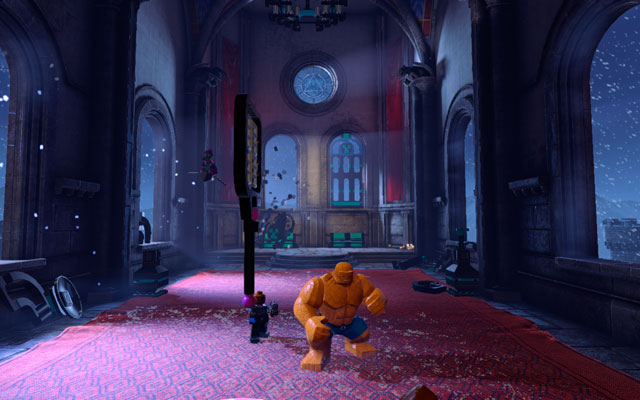 In the second round you will be flooded by the ocean of the enemies - defeat them all, dodging Green Goblin's bombs in the same time. Wait for the stained-glass window on the right to become shattered, then build a huge swat from the debris. Now lift it with Invisible Woman - in this way you will force an enemy to fall on the ground, so you can hit him easily. 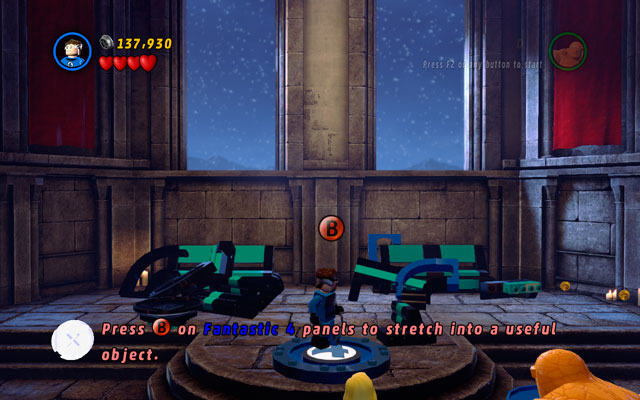 In the final round defeat all minions (as always), then approach to the shattered stained-glass window lying at the end of the arena. Build a Fantastic Four panel from the debris, then use it with Mr. Fantastic to catch Green Goblin for the last time. Strike him with the final blow, and the mission will be over.