At the beginning of the level prepare for a fight with two groups of octobots sent by Doctor Octopus. Handle them, so you can chase the arch villain. 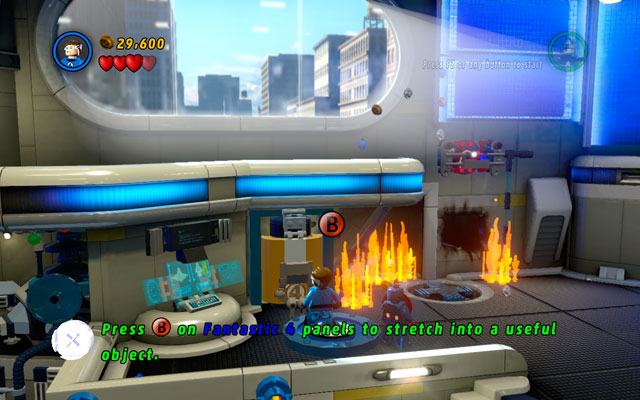 During fight with second wave of the enemies, the fire will broke up on the floor. To extinguish it, approach to the flames and build a Fantastic Four platform from the bricks. Use it with Mr. Fantastic and click on the interaction button to unlock a shield switch on the right. 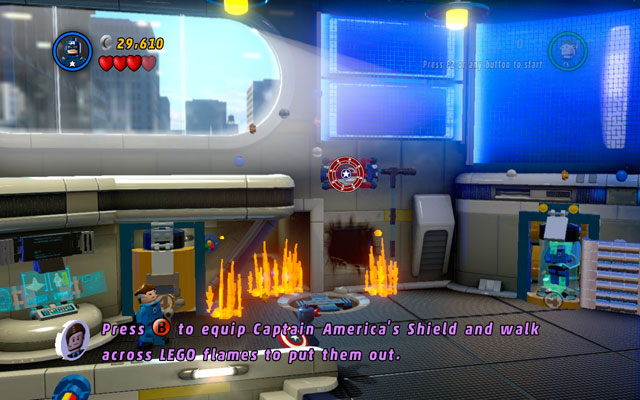 Toss Captain America's shield at the target, fixing the lift. Go to the upper floor and wait for Doctor Octopus to escape - new enemies will appear at this moment. Defeat them and move on. 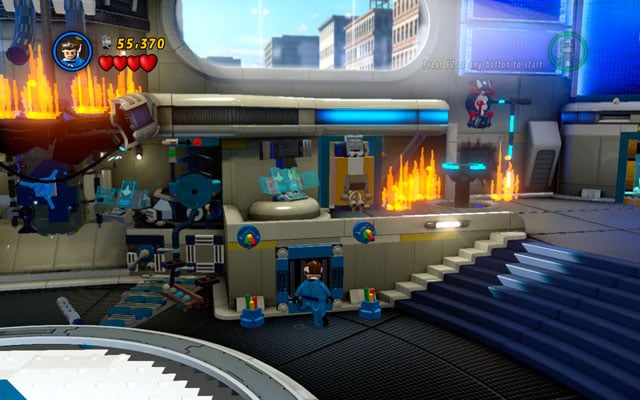 Choose Mr. Fantastic in the first stage and build a ventilation shaft from the debris (it can be created in the central-right part of the area). Then pass through it using your elastic abilities. 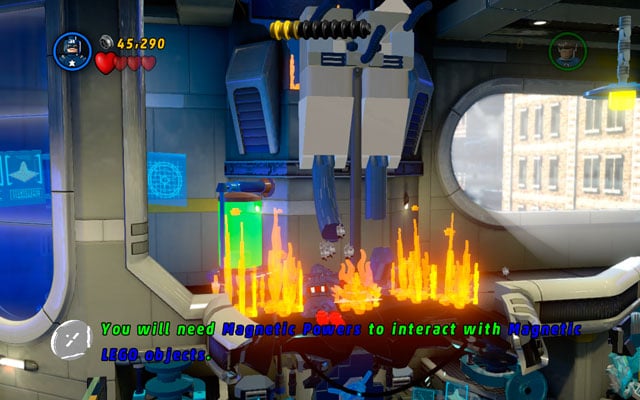 The case with Captain America is more complicated - he must get through the flames to the another side of the room. Use defensive stance (interaction button) to protect yourself, so you can pass through the dangerous area unharmed. 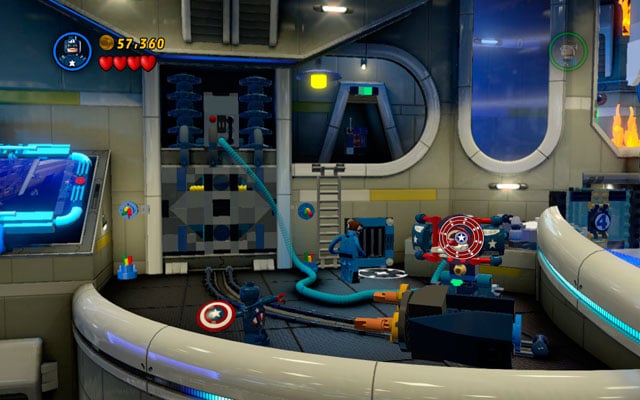 On the second part of the area Mr. Fantastic should yank a red attachable point to damage the wall. Then build a patriotic panel from the debris and toss a shield at it (as Captain America). 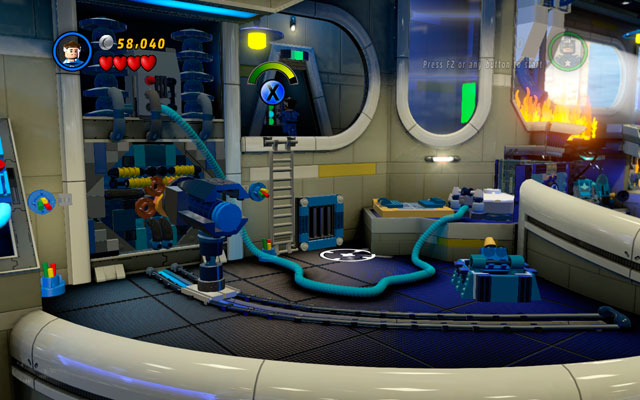 Turn on the machine and climb a ladder using Mr. Fantastic, so you can approach to the computer. Hack it (interaction button, then attack button) and wait for a plug to connect to the power point. Then jump down on the red platform on the right, switching the laser beam on. After that you can return to the first area. 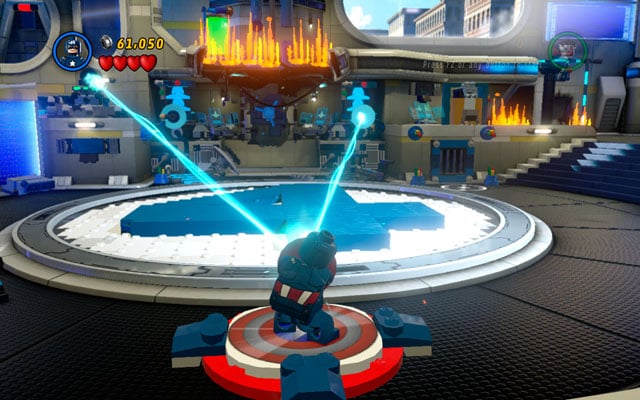 Build a platform for Captain America from the debris and use it. Reflect the beam using your shield to charge both blue plates - special lift to the next area will appear shortly after that. 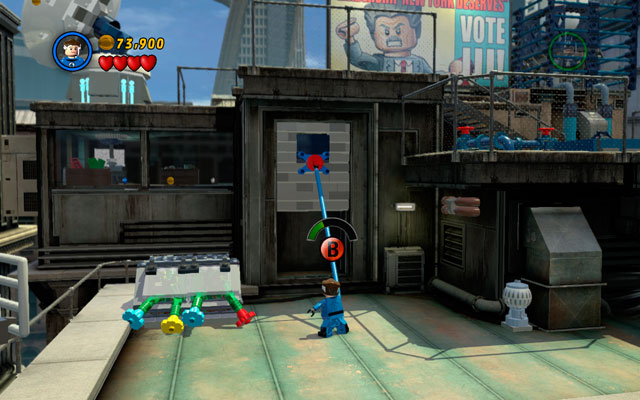 On the roof turn right and jump down as Mr. Fantastic, heading to the blue platform. Glide over the gap to the next building and fight some enemies standing there. After that yank the red attachable point on the wall and build a ladder from the debris. 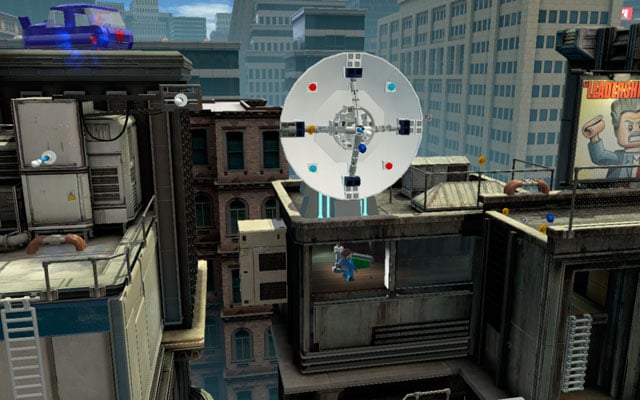 Climb to the control room and destroy all obstacles hidden there. Build a lever from the bricks and use it to rotate a satellite dish (the right position is showed above). 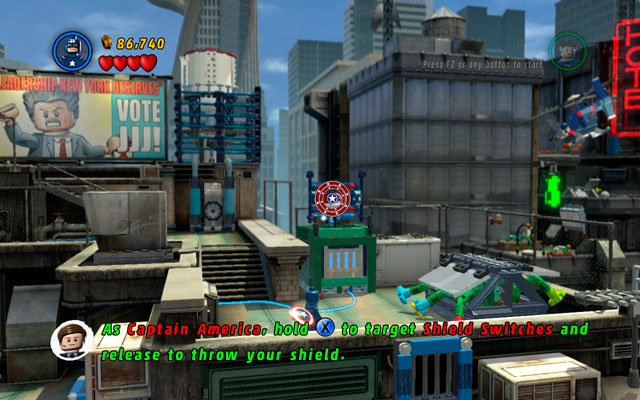 Choose Captain America and go right, jumping between several antennas - finally you will reach to the second roof. Go downstairs and toss a shield at the mechanism - in this way you will switch of a ventilation system that is interfering Mr. Fantastic. Now you can choose second character and pass through the iron bars on the right. 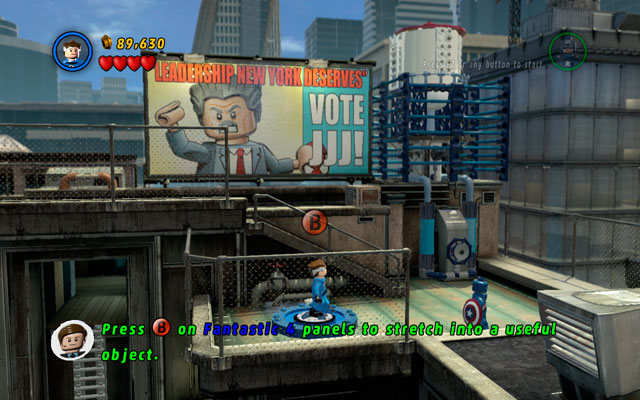 Assemble the team in the one location and go to the middle floor of the roof (between silo and flowerbed). Destroy all obstacles in the area and build a Fantastic Four panel from the debris. Use it with Mr. Fantastic to break down the silo. 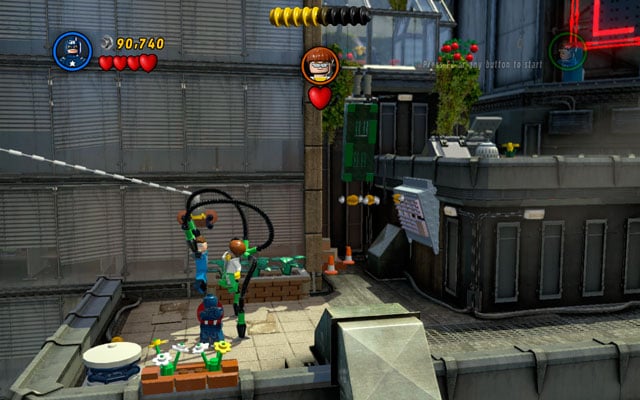 Build a rope from the silo's debris and use it to go to the next roof. In that moment one hero will be caught by Doctor Octopus, so second one must rescue him by hitting the enemy. 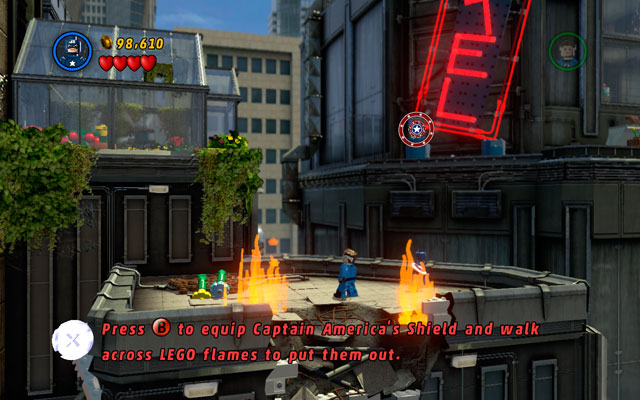 The arch villain will escape, calling some octobots - defeat them and then head right, climbing on the upper level of the building. Toss Captain's shield at the column under the HOTEL neon for two times to create a passage between two skyscrapers. 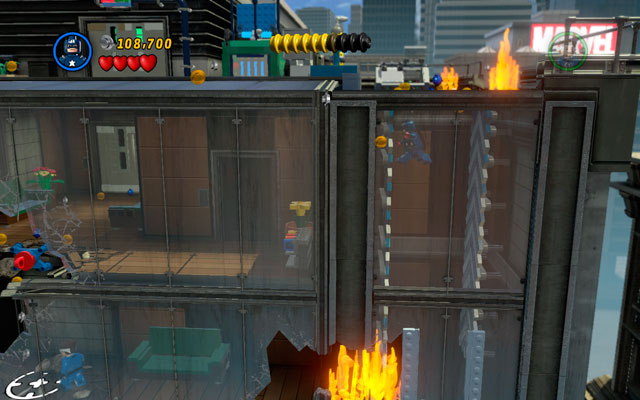 Pass to the other building and kill all octobots in the area. Then choose Captain America and enter the block. Turn right and jump between two white-and-blue walls to climb on the roof. 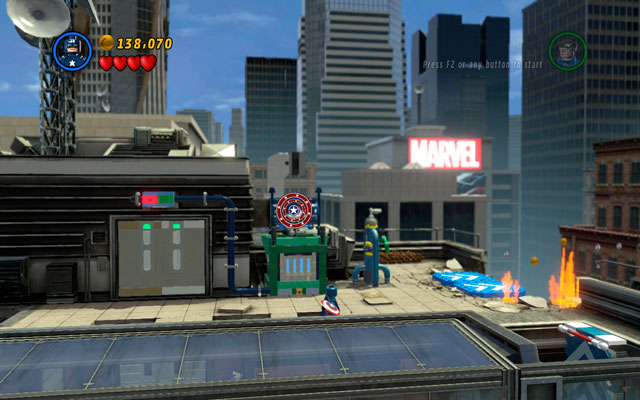 Standing there destroy all obstacles in the area, building a lift control machine from the debris. Toss a shield on it to unlock a passage for Mr. Fantastic. As aforementioned use a red attachable point on the highest floor of the skyscraper, then defeat an enemy and enter the lift. 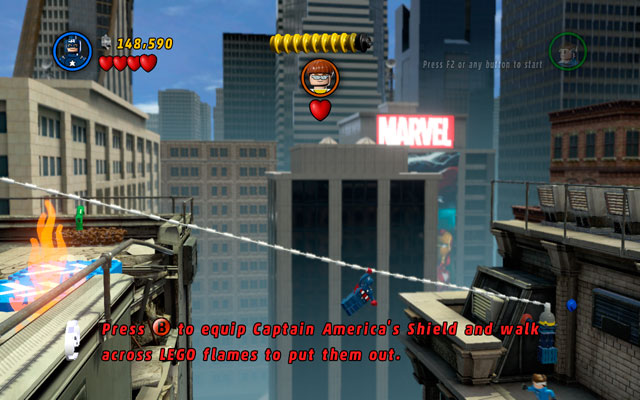 Go to the right edge of the building and glide over the gap as Mr. Fantastic. Kill all enemies and destroy nearby obstacles, building a rope for Captain America. 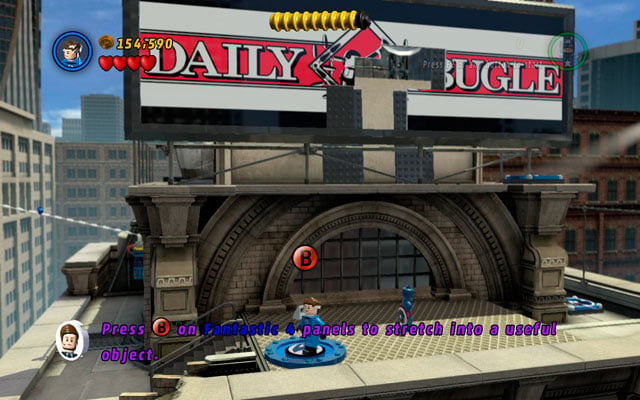 Toss Captain's shield at Doctor Octopus to make him run. Then choose Mr. Fantastic and use his abilities to pass through the iron bars on the right. Standing on the upper platform, yank a red attachable point to drop some bricks down. Build a Fantastic Four panel from them and use it to hit an enemy. 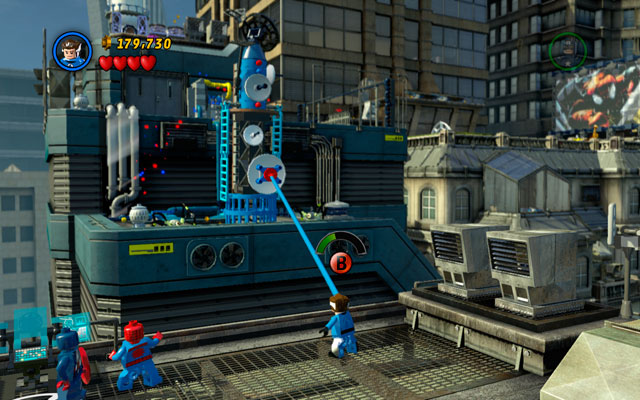 In the next sequence you will be supported by Spider-Man. Use his web to yank an attachable point at the opposite side of the roof to create a passage. 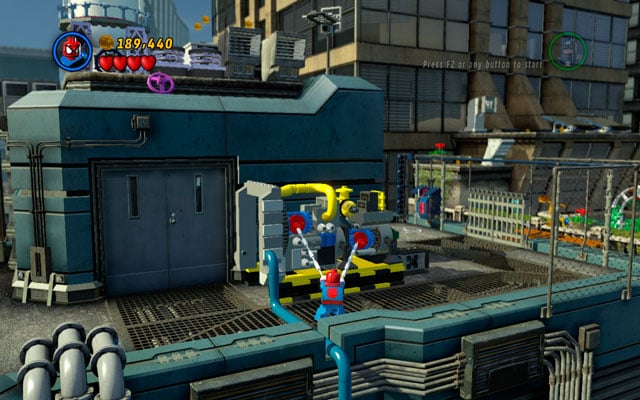 Defeat all enemies and go forth. Kill another group of octobots and use a spider sense to uncover a sticky wall. Climb to the top of the building and use Spider-Man's web to yank two attachable points. In this way you will switch ventilators on, so the other members of the party can get through to the next location. 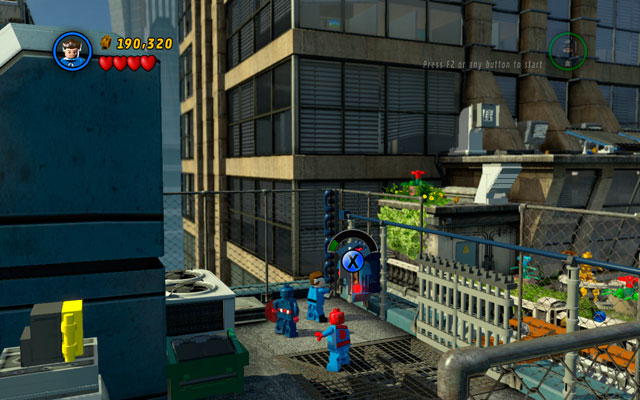 Choose Mr. Fantastic and head right, approaching to the fence. Destroy all objects in the area and build a computer from the debris. Use it to open the gate, so you can go further. 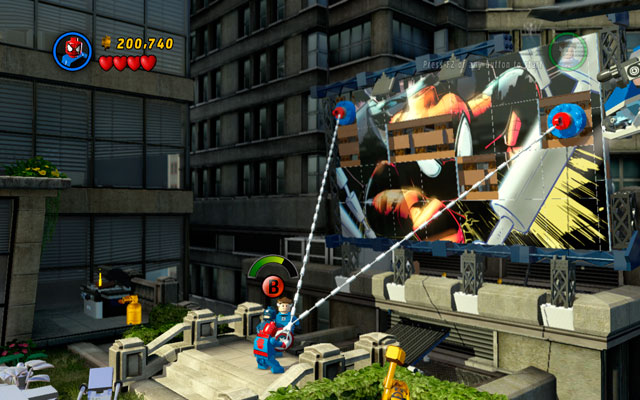 Defeat all opponents and go to the right side of the location. Use a Fantastic Four panel as Mr. Fantastic to create two attachable points for Spider-Man. Yank them with your web, opening the passage to the next roof. Defeat all enemies and enter the arena with final battle. 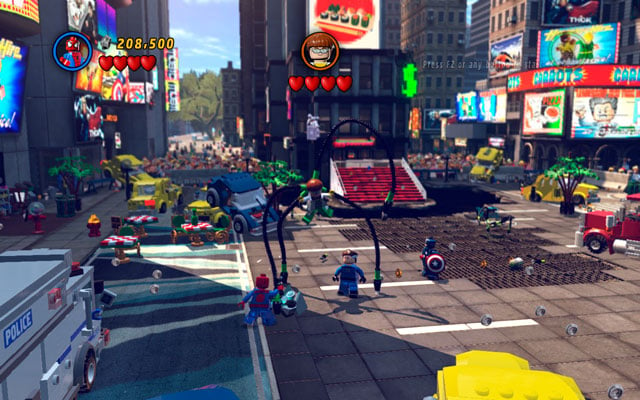 The final battle with Doctor Octopus is quite demanding. Escape all attacks performed by enemy, being as agile and mobile as it is possible. If you have been caught by enemy, simply change the character - in this way you will avoid losing studs.

The pattern of the fight isn't complicated: approach to the enemy and wait for the killing blow, then dodge all the hits. Archvillain's tentacle will get stuck, so you can easily break it down (hit an attack button). Repeat this action for three times, finally defeating the "armless" Doctor Octopus.