On this page of the LEGO Star Wars The Skywalker Saga guide, you will find information on how to unlock the Death Star I as a Capital Ship that you can visit. In addition, you will find descriptions of puzzles from the inside of Death Star I, thanks to which you will obtain unique secrets - Kyber bricks. 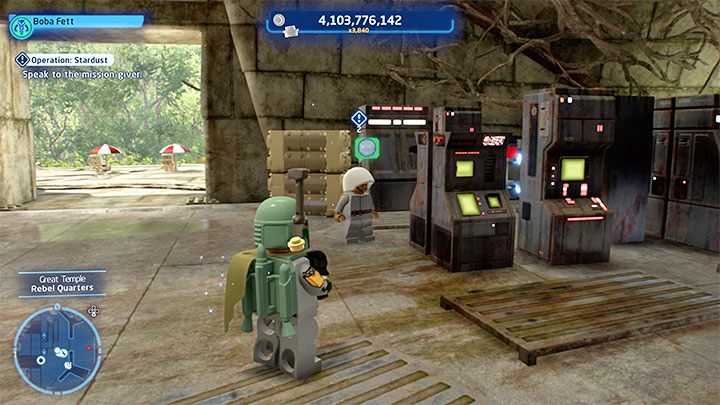 Death Star I is one of the five Capital Ships available in the game. These are large units that you can unlock and buy in order to be able to visit their interior.

In order to access Death Star I, you need to complete the following steps: 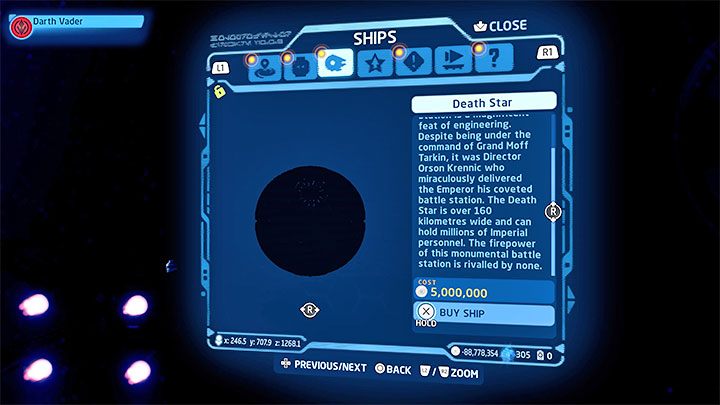 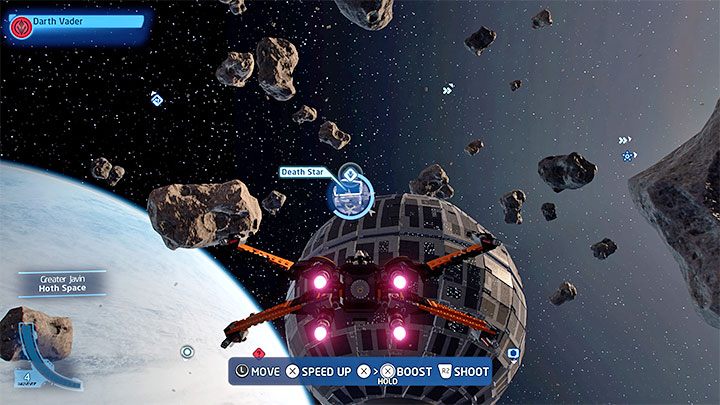 After completing the side mission, you need to additionally purchase Death Star I for 5 million studs. After purchase, make sure you are in orbit of any planet and summon Death Star I. Then board it. 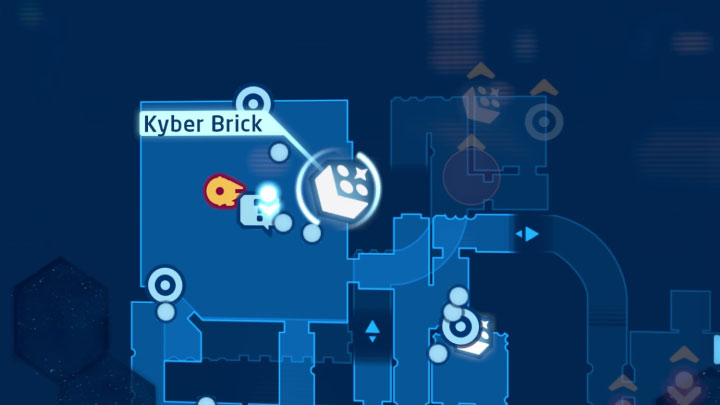 The brick is inside a locked box in the main hangar, where you start exploring Death Star I. 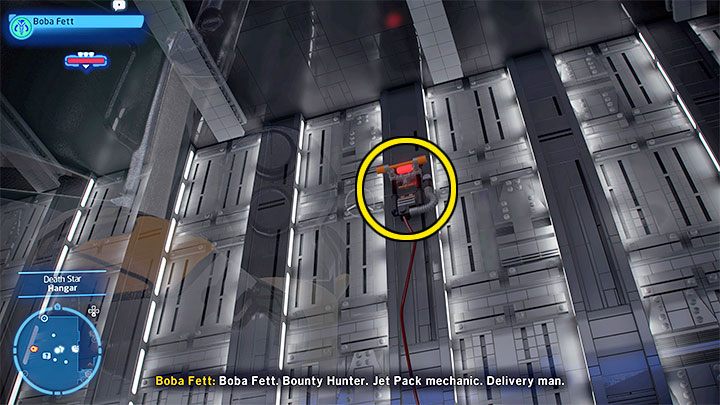 In order to solve the puzzle, you will have to reach the high lever presented in the screenshot above. Unfortunately, you cannot pull yourself to it while standing downstairs. 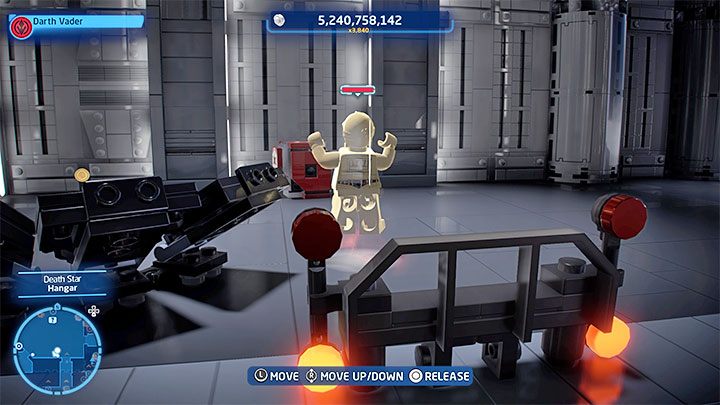 Choose a character that wields the Force and any droid. Use the Force to catch the droid and move it to the upper level of the hangar (screenshot above). 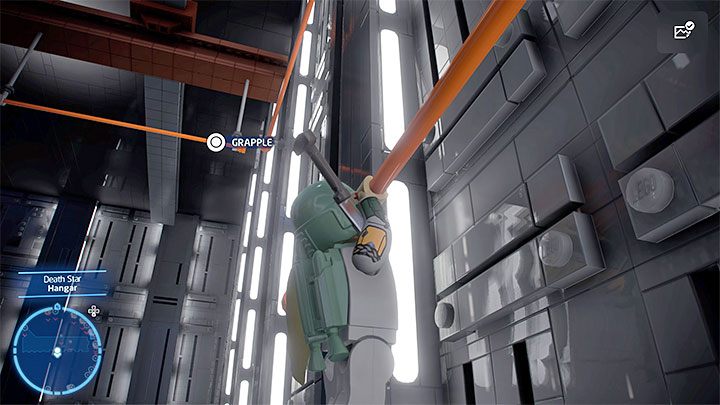 Now you have to replace the droid with any character with the ability to grapple the hooks (eg. one of the bounty hunters). Pull yourself to the hooks on the walls and ceiling. 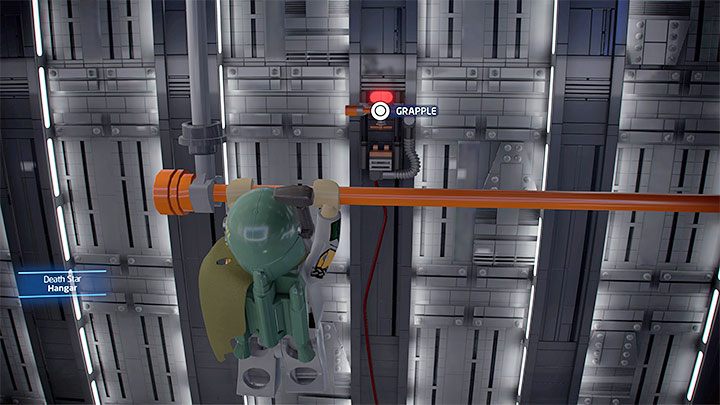 Ultimately, you have to reach the place presented in the screenshot. The hero can pull himself to the lever here and, by lowering it, open the container with the brick. 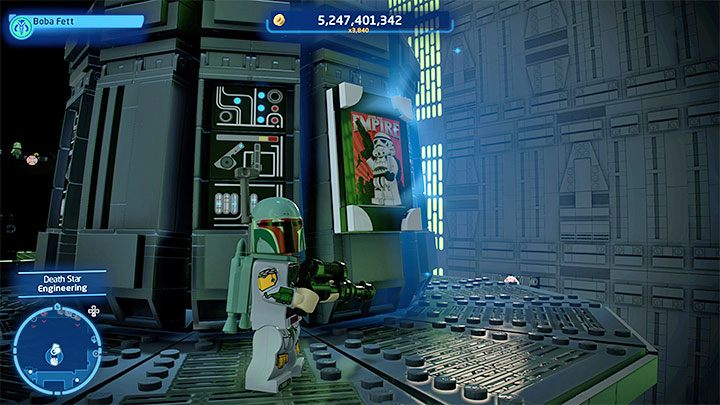 To complete this puzzle, you have to find and destroy 10 posters (an example is shown in the screenshot). They are marked with circular icons on the map. Some of them are in places that are hard to reach, but you will visit them while solving other Death Star puzzles. 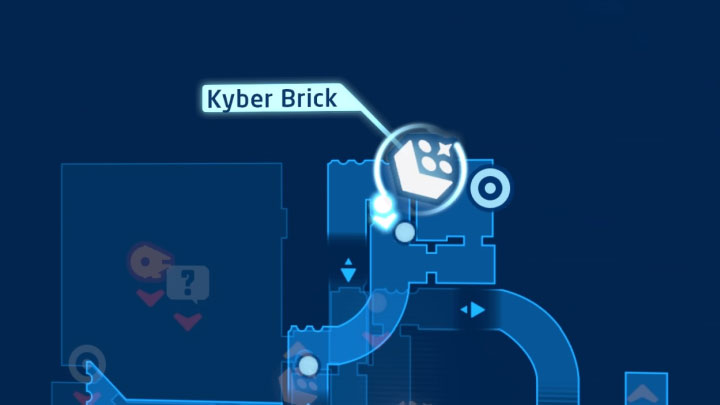 The brick is in the northern room on the middle level of the Death Star. 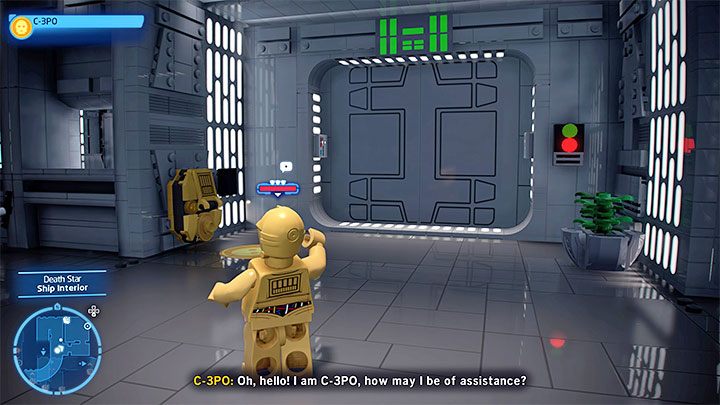 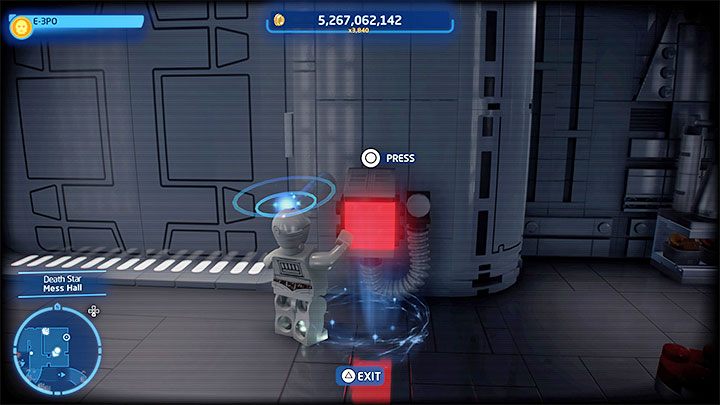 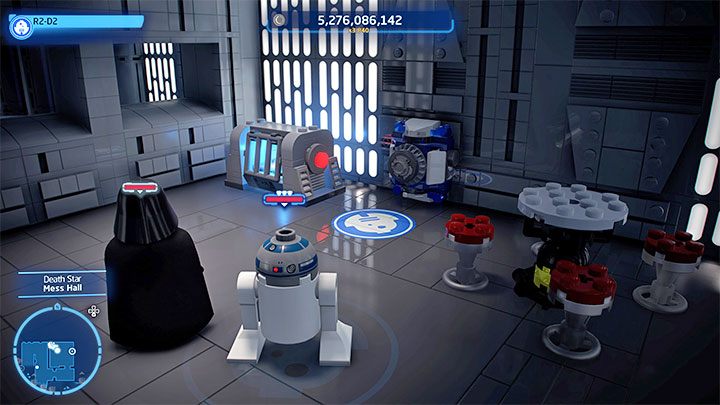 After entering the room, you must additionally select R2-D2 in order to use the blue terminal. Completing the mini-game with rings will open a container with a brick. 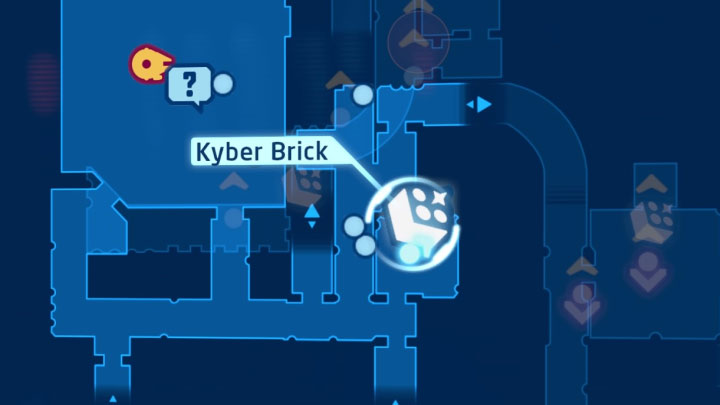 The brick is on the lower level, in the central part of the Death Star. 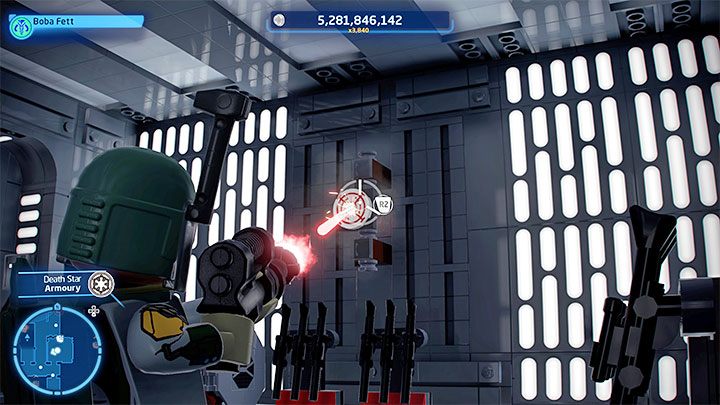 The puzzle is simple - there are 4 shields in the room with the locked container. Locate them and shoot them all before the allotted time runs out. 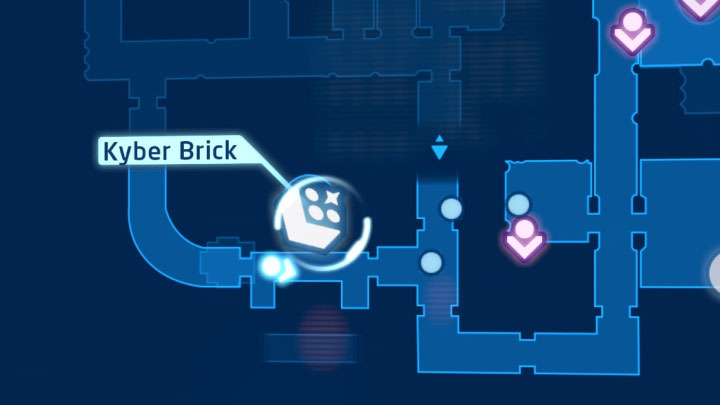 The container with the brick is in the southern part of the Death Star, on its middle level. 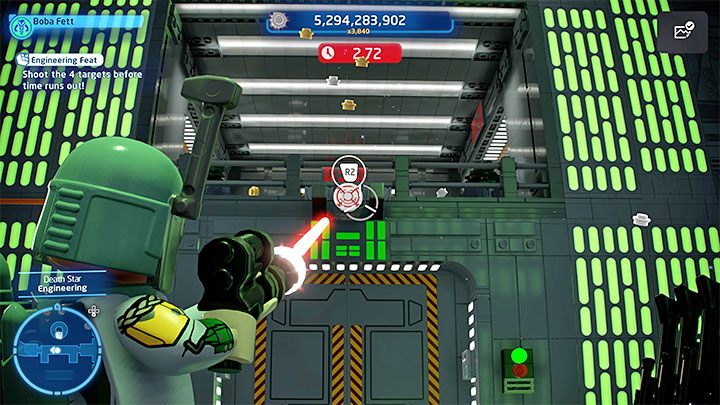 Take a look around the area to locate 4 different targets. Choose any character with a blaster and hit all targets before time runs out. Then jump over to the balcony with the collectible. 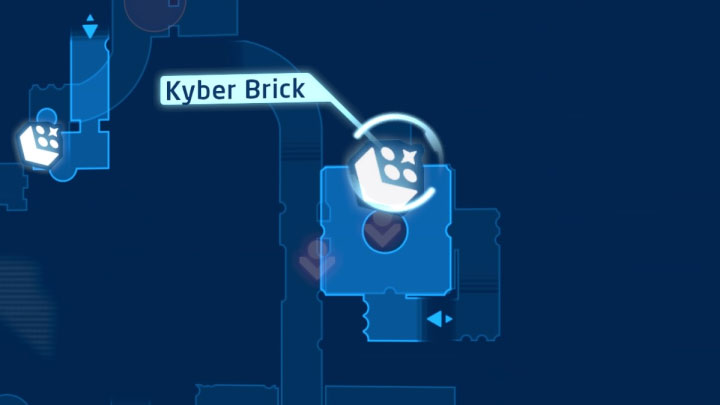 The secret is in the upper part of the Command Center, and it's the eastern part of the Death Star. 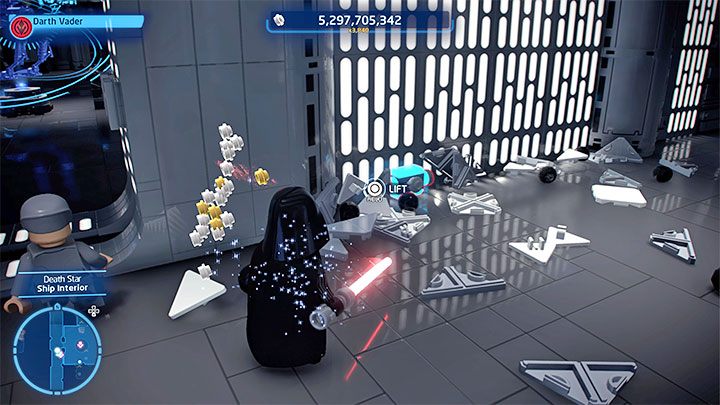 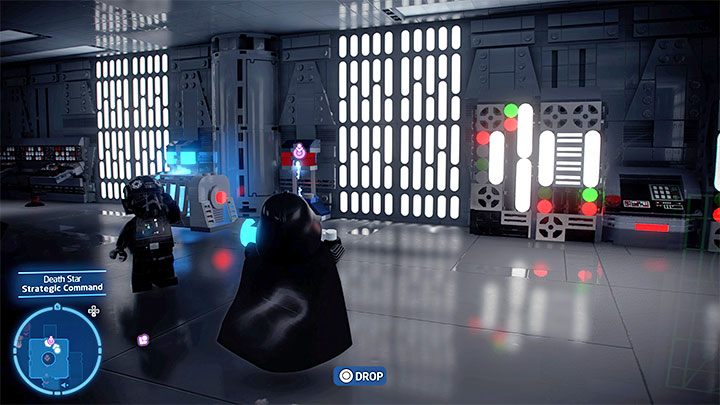 In order to open the container with the brick, you need to provide 2 power sources. They are marked with purple icons, and one of the items is behind crates that can be broken. Place the power sources in the matching slots. 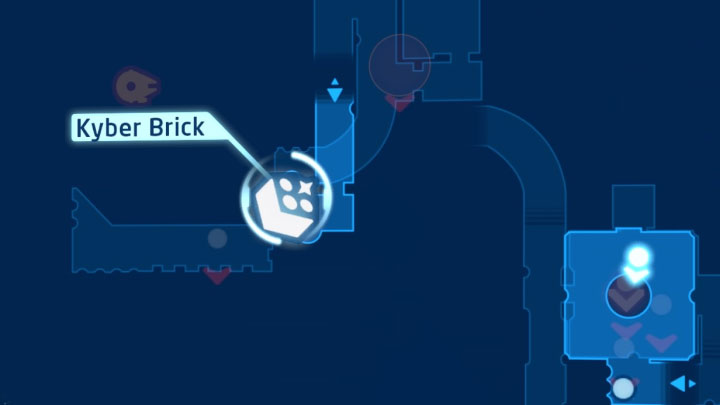 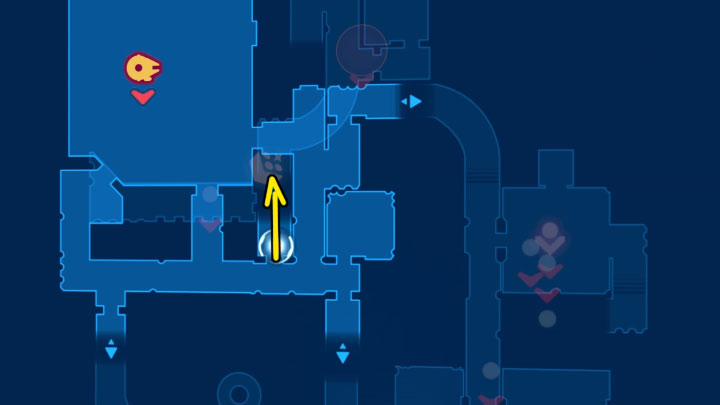 The secret is in the room shown in screenshot 1 - it's the highest level of the Death Star. You may have trouble getting there. You have to start your journey in the place shown in screenshot 2. It is a corridor on the lower level leading towards the northern stairs. 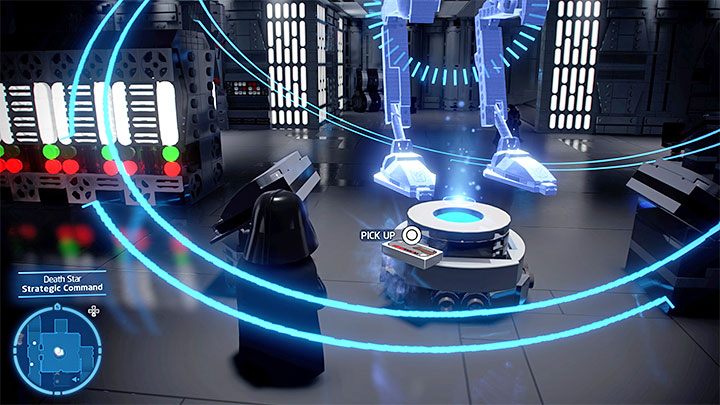 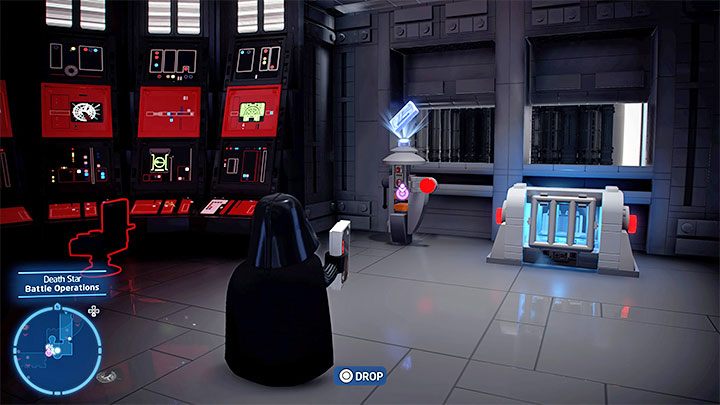 Before you set off on your journey, find the keycard shown in screenshot 1 in the eastern command center (it is marked with a purple icon on the map). You have to get to the reader from screenshot 2 with it. Placing the card in it will unlock the container with the Kyber brick.