On this page of the LEGO Skywalker Saga game guide you'll find a walkthrough of the boss fight against Darth Sidious, also known as Emperor Palpatine. The battle takes place during the Senate Showdown level in Episode 3 (Revenge of the Sith). You'll learn how to avoid the Emperor's lightning bolts, how to drain his health bars and how to reach the flying platforms. 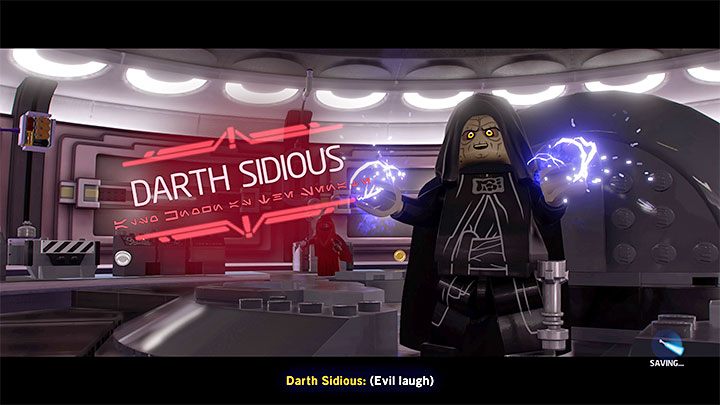 Darth Sidious, also known as Emperor Palpatine, is one of the major bosses fought in Episode 3 (Revenge of the Sith). You will start fighting him after reaching the Senate building and starting the Senate Showdown story mission.

Phase one - round hall 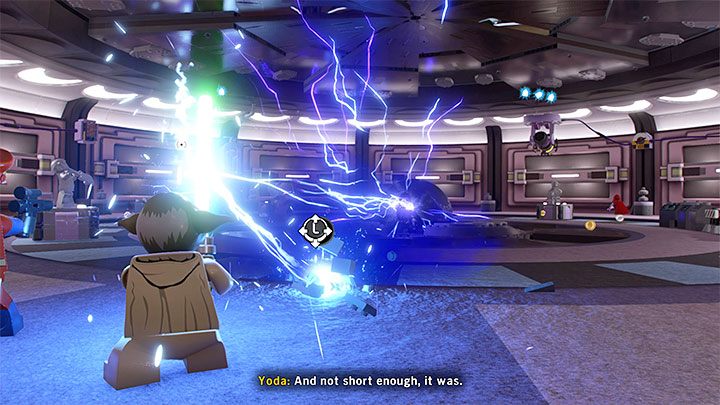 At the very beginning of the battle with the boss Darth Sidious, you have to defend yourself against the lightning attack while playing as Yoda. Wait for the crosshair to appear on the screen and point it at Palpatine to reflect and interrupt his attack. 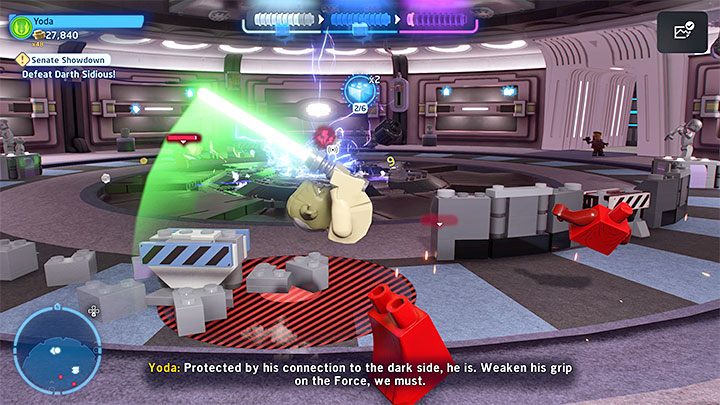 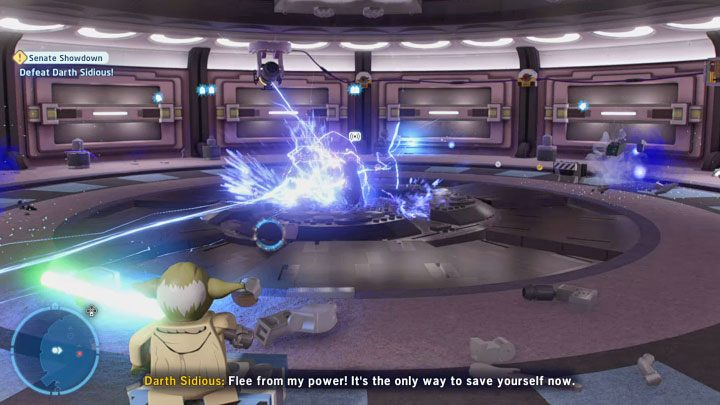 Palpatine will keep trying to use Force Lightning throughout the fight. During the fight you must: 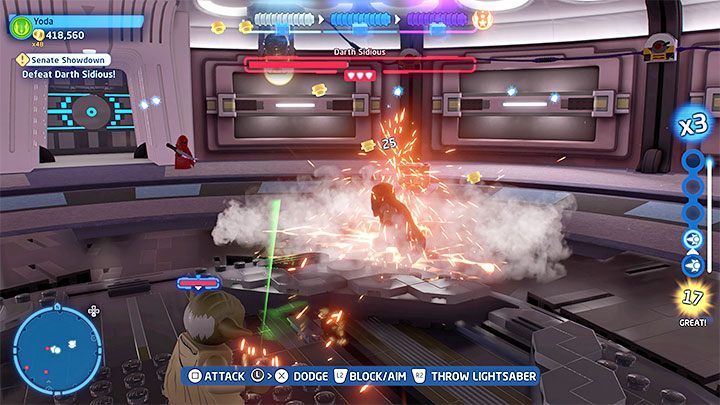 Darth Sidious has to recover for a while after using the lightning spin. Take advantage of it and attack him while he's winded.

A more conventional phase of the fight will start, during which you must evade his powerful attacks signaled with red lines and circles. 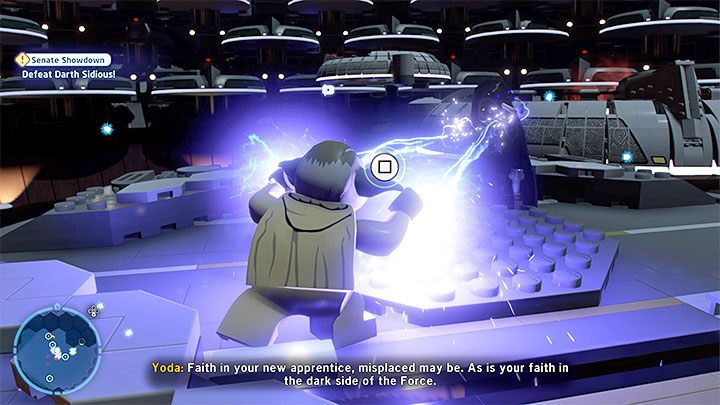 After draining his first health bar out of four Sidious will pull you closer - struggle against him using the Force. As usual, you must quickly mash the buttons displayed on the screen. 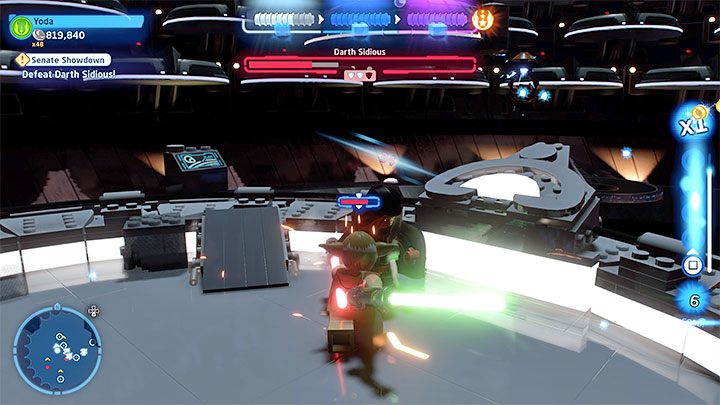 During phase two the arena will change. Start by jumping onto the adjacent platform where Sidious is. You can start attacking him right away. Keep dodging his attacks but be careful - the platform is small and it's easy to fall off. 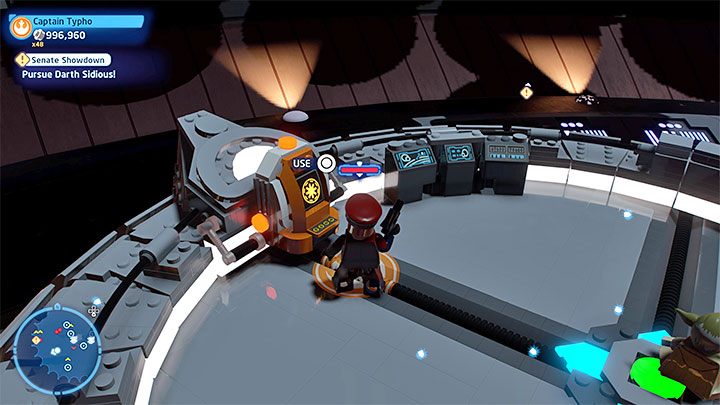 After losing his second health bar Sidious will flee to a different, distant platform. There are two paths you can take to reach him, left and right, both having soldiers on them. It doesn't matter which path you choose, you'll have to do the same thing either way. Defeat the boss' troops, build a button, stand on it as Yoda and ask Typho to interact with the console (symbol mini-game). 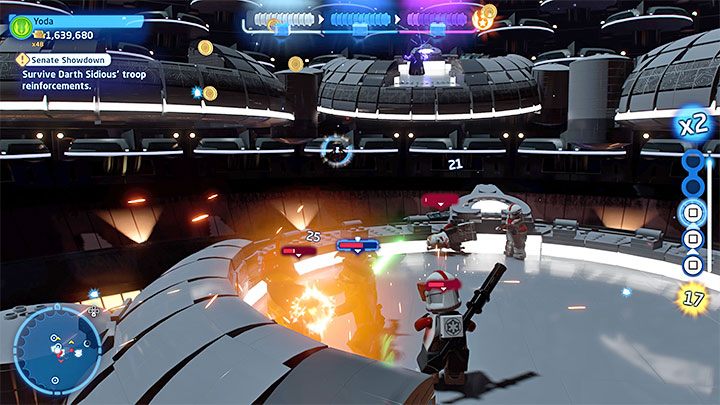 You can now reach the platform Palpatine is on and fight him again (remember about dodging). Eliminate the remaining soldiers and drain Sidious' final health bar.

Depleting all of the boss' HP does not end the fight. The Emperor will call in reinforcements - fight against the soldiers landing on your platform. 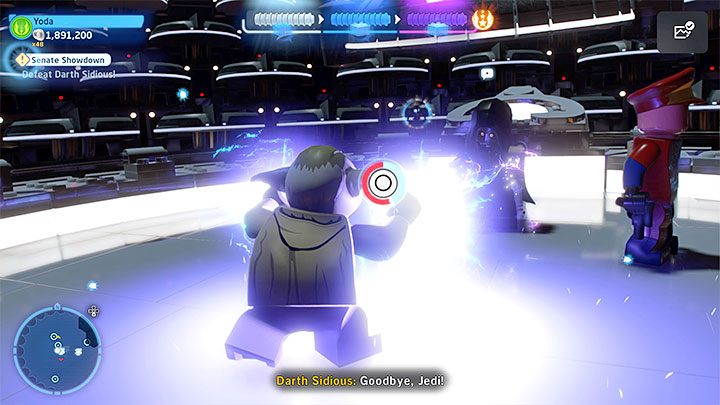 Eventually he'll pull you into yet another QTE, identical to the previous one - rhytmically press the displayed button to struggle against Sidious and finish the fight.