Try moving closer to a large church. Obviously you should stay close to the left building, instead of choosing the main passageway. You still have to avoid sustaining injuries from a nearby mortar explosions. Get ready to proceed with the assault. Once a mortar strike has ended, start running towards the stairs. MAKE SURE your colleagues are following you. 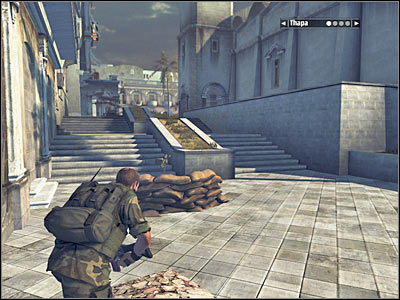 You will have to be ready to act quickly. You are going to be attacked by a larger group once you're close enough to the top of the stairs. Start off by securing an upper balcony. One of the enemy soldiers will be standing there. Kill him yourself or destroy a nearby explosive barrel. Once he's gone, focus your attention on other opponents. Obviously your team should take part in these fights. 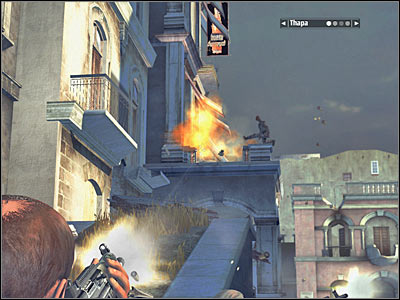 If you don't want to risk sustaining major injuries, you may consider going back to the stairs. You would be able to hide behind a small brick wall (screen). Don't worry about your colleagues, because they should be fine on their own. Order them to stay here once they've successfully eliminated all enemy units. 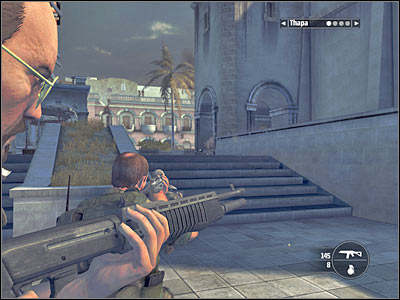 New objective: Meet Up With The Other Men

Now you will have to deal with a new type of problem. An armored vehicle is guarding a nearby street. As a result, you will have to destroy it in order to be able to proceed to a rebel hideout. It's very important that your men stay behind. Head on to your right and find a rocket launcher (screen). Take it. 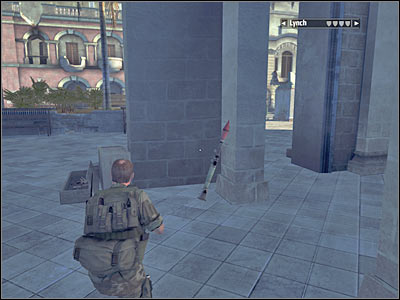 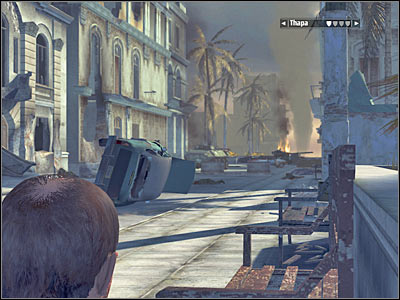 You may proceed to the new area of the map. Thankfully, there aren't any enemies out there, so you won't have any problems reaching a rebel hideout. It's going to be one of the left buildings. Rebel units will automatically join you. Each of your teammates will have three rebel soldier assigned to him, so you won't issue any orders directly. 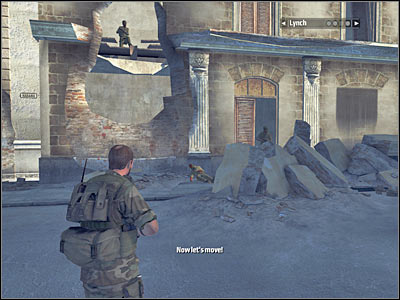 This is going to be the most difficult challenge of the mission. Before we'll go into details, there a few important things for you to know about:

1) Avoid the enemy gunship at all costs. You should be able to familiarize yourself with its flight route, so you'll know where and when to duck in order to avoid being hit. Thankfully, you will be allowed to destroy the helicopter, however you'll probably achieve this later on during the course of the battle.

2) I'd strongly recommend leaving the entire team behind, because your allies have a very bad tendency of leaving their original posts and going into battle when it's not needed. This mostly concerns rebel soldiers. Thankfully, you won't be punished in any way for losing them.

3) Don't even think about storming through this square quickly, because you'll die and you'll have to repeat everything from the beginning. Your each move should be thought out, so you won't risk lives of your teammates.

Like I've already said, you should order your men to stay near a destroyed armored vehicle (screen). They should be safe here, so you won't have to worry about them getting into trouble. Don't worry, because you will be able to secure the first section of the square by yourself. 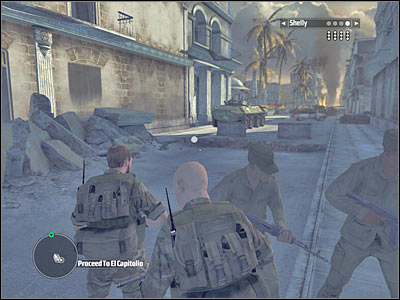