The guide to Just Cause 4 will introduce you to the gameplay of complete destruction. Our compendium tackles all the most important elements of this game. The first chapter of our guide focuses on the basic gameplay mechanics. Here, you can find starting tips, learn how to traverse the game's world, how to recapture cities, how to fight or how to upgrade your grappling hook. The FAQ section, i.e. Frequently Asked Questions, is a supplement to this section. We have tried to dispel any doubts that may arise during the game.

The guide also features a walkthrough - our tips will help you complete every main mission as well as quests from Sargento, Garland, and Javi. The next part of the guide features locations of all tombs - learn where to find them and how to solve their puzzles. Another part of the guide contains the game's map where we have marked all locations of the unique vehicles and weapons. The closing chapter has system requirements for Just Cause 4 as well as controls for all the platforms.

The first chapter of our guide focuses on the most basic elements of the game - learning the game's mechanics will help you to start getting fun really fast. The page with starting tips is a set of useful tips useful during the first few hours. This chapter also contains information on recapturing locations, traversing the game's world.

The Frequently Asked Questions section is an extremely helpful part of our guide. The following pages explain many elements of the game and are an extension to the issues presented in the starting tips. Our detailed guidelines will allow you to deal with more difficult and complex gameplay mechanisms.

In Just Cause 4, you will spend most of your time on shooting and causing explosions. However, the game also features tombs. Just Cause 4 has a few of these locations. There, you will have to solve not very complicated puzzles. The pages listed below contain information on where to find a given tomb and what you have to do inside it.

Just Cause 4 is full of missions. In this chapter, you can learn how to complete some of the main missions. We didn't forget about region strikes as well as missions for Sargento, Garland, and Javi. We have listed numerous tips. The more challenging parts are also explained with pictures.

The last chapter focuses on the game's technical aspects. Check Just Cause 4's system requirements to learn if you can run it on your PC. The description of controls can also be useful to you - this section contains information on the controls for the PC, PlayStation 4 and Xbox One versions.

A handful of tips

The world of Just Cause 4 is vast and perfect for causing destruction. Check our starting tips and the FAQ section if you have just begun playing the game such as system requirements or controls. Read the following information to make the gameplay more enjoyable.

How to get the Neon Racer Pack?

What does the Just Cause 4 Digital Deluxe Edition contain?

What does the Just Cause 4 Gold Edition contain?

The patch 1.02 is available on all platforms - PC, PlayStation 4, Xbox One. The developers have focused on improving the game's performance and eliminating some of the graphics-related bugs. Besides that, the consoles have now better resolution scaling while PC players have received increased mouse sensitivity.

About Just Cause 4 Guide 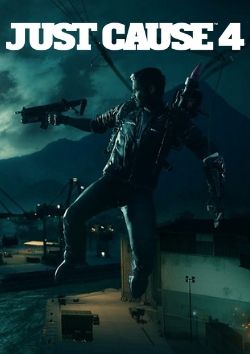 Just Cause 4 is the fourth entry in the popular series of open world action games developed by Swedish studio Avalanche Studios. Similarly to the previous entry in the series, the game debuted on platforms like PC Windows, PlayStation 4, Xbox One etc.

The main protagonist of Just Cause 4 is Rico Rodriguez, a character well known from previous entries in the series. This time, he enters the fictional country of Solis in South America. The citizens of this country must face harsh weather conditions and the regime of the Black Hand  a paramilitary organization led by the merciless Gabriela Morales. Rico must deal with her by wrecking chaos and destruction wherever he appears. He will also discover the truth about his father.

In Just Cause 4, the action is presented from a third-person perspective. The players are taken to an open world the size of one thousand twenty-four square kilometers. Its the biggest sandbox map Avalanche Studios ever created and it includes tropical forests, high mountains, deserts, cities, and villages. The players can travel through the areas on foot and by using various vehicles. In addition to motorcycles, cars, helicopters, and jets, there are transporters, bulldozers, cranes, jet skis, and microjets available. The players can also glide with a wingsuit or participate in parachute jumping.

During the game, the players are completing story missions and various side activities that gradually reduce the influence of the Black Hand. Rico can use a variety of weapons and gadgets, including the famous grappling hook that enables him to join various items and objects together. Although it was possible to use the tool in various ways in the previous game in the series, now it is even more versatile  the players can customize it and, for example, add a rocket launcher to it that makes the objects connected to it float in the air.

The greatest novelty in Just Cause 4 are dynamically changing, extreme weather conditions like tornadoes, sandstorms, blizzards etc. They can provide Rico with an advantage; these arent merely visual effects, but fully simulated events. For example, a tornado can consume cars and smaller objects and destroy buildings.

Just Cause 4 is powered by Apex technology that was also used in games like RAGE 2 (developed by Avalanche Studios in cooperation with id Software) and the Hunter: Call of the Wild. The game features high-quality graphics.

More About Just Cause 4

Assassin's Creed Odyssey, Forza Horizon, FIFA 19, new Tomb Raider. These recent hits are very different from one another, but there is a certain common denominator  all these games could be played a few days before the release... if you paid extra.