In Imperator: Rome you have many different tools that will allow you to gain higher control over many aspects of the state. 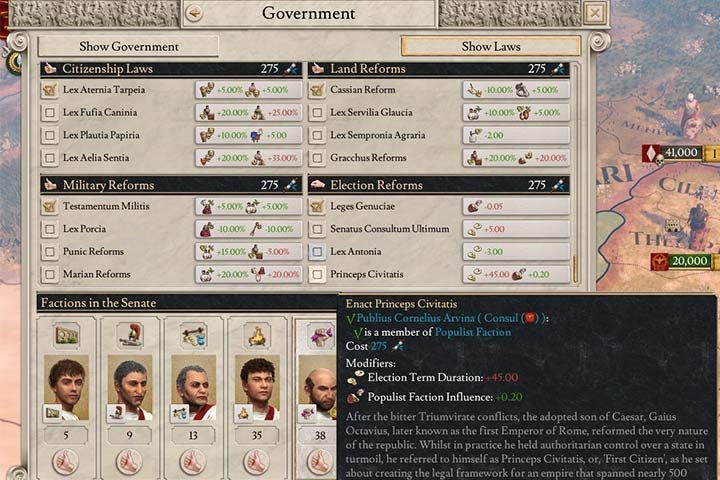 Some laws are necessary for making special decisions. For example, the implementation of Princeps Civitatis requires a dictatorship as a new form of government.

Laws are a combination of several categories that have influence in a particular area of the state. Access to laws can be found on the government tab. Each group of laws and reforms relates to a particular aspect of governance, for example - military reforms allow the choice of law that will strengthen your army in a specific way, such as reducing the operating costs of cohorts, increasing human resources or supplementing losses. Tougher versions of such laws sometimes have penalties or negative coefficients. You always have a choice of 4 different laws, with similar bonuses that usually apply to a specific area of your state, for example, the military laws will only affect military matters.

At the beginning of the game, you have the default laws in each reform group. If you want to make changes, you have to spend a significant amount of oratorship points on changing laws (the main cost is 250 power points). If you play a Republic, you still need to reckon with the Senate votes in making any changes. Otherwise, the forceful change of laws adds points of tyranny, which are not useful for the effective management of the Republic. In turn, monarchies have a special group of laws that decide on the order of succession to the throne. It is worth making the necessary changes earlier if you want your chosen family to rule longer.

Government Offices are special stands that help the ruler to manage his state better. Thanks to these, you will be able to strengthen your state economically and militarily. 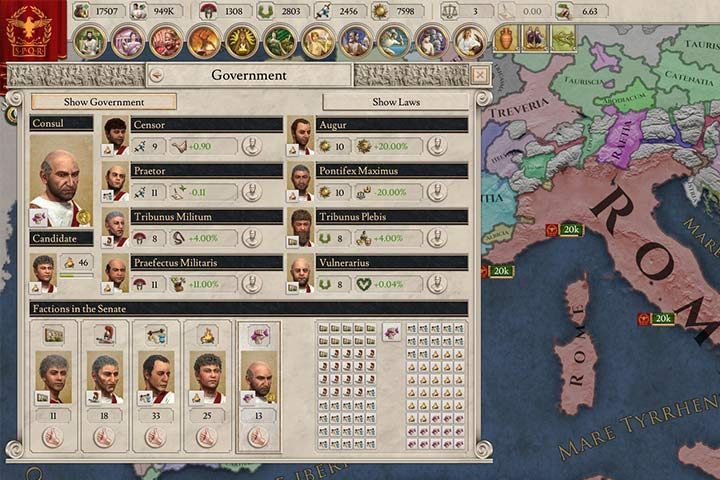 Officials in the Republic are very useful, especially the censor, who strengthens your influence on the Senate and facilitates decision-making.

In every form of government there are 4 groups of offices associated with a particular attribute of the character. Each level increases the attributes of the bonuses that arise from the office. There are 8 positions to fill. Each organ is associated with a certain bonus that has a positive effect on your state, but these can only be taken by specific members of your state.

Government in the republics concentrate on the stability and development of the economy:

Offices in monarchies and kingdoms look similar, although some offices change. Military departments raise the level of morale and reduce the cost of maintaining officials. Court Philosopher is very important. He enhances the legitimacy needed to maintain power and peace in the Kingdom.

Ranks and positions that are available in various tribal forms are little weaker, but they concentrate on the happiness of citizens - as much as two offices focus on different classes of the population. Unlike centralized governments, you can collect better tax bonuses, but you'll get lower medical care and lower points of aggressive expansion.

It is always necessary to fill all available offices, as they provide only bonuses. Of course, some events are related to the authorities and are not always pleasant, but the vacant and empty positions are simply a waste. Moreover, by giving positions you can in a simple way increase the loyalty of the character and their personal fortune and popularity. It is necessary to choose officials, people with the highest attributes, to receive the biggest bonuses. Thus, you will provide your economy with useful bonuses and strengthen your military and diplomatic position. If you lack characters, just conquer a small state and enslave their families or invite a character from remote areas.