Guide to Imperator: Rome is a set of complete information, advice and strategies for managing an ancient state. You will find here a lot of information and advice, concerning all the initial stages of the game and many basic mechanics and functions. You will find out which nation is the best choice for your first games and which should be avoided. In this guide you will also find information about economy, war diplomacy and many other aspects of this complex game.

What do I need to know about Imperator: Rome?

Imperator: Rome enables you to manage an ancient state in Europe, North Africa and Asia. The gameplay is very similar to many other titles from Paradox studio, such as Europa Universalis, Crusader Kings or Stellaris. Each nation has numerous stats, residents and characters that have can influence foreign and internal policy. What's more, each army is commanded by a character who has a loyalty factor and can betray you and start fighting against your troops. It is necessary to develop technologies, cities and provinces as well as traditions unique to a given cultural group.

Similarities to other games from Paradox

If you have played other games develop by Paradox, their so-called Grand Strategies, you will notice a lot of similar elements and minor differences.

Imperator: Rome has the most detailed map division model, including the smallest territorial units, e.g. cities (and not provinces as in the previous part). A group of cities forms provinces, and these in turn form regions. All this is to enable a more detailed view of the world and to facilitate cultural division and the creation of new national borders.

Which nation to choose for the first game?

It's best to choose the eponymous Rome. While it's not the strongest state early in the game, it has the potential to become the greatest power. It's located in a good geographical and geopolitical position. You have small, quarrelsome neighbors, but you have to take care of the economy and increase your military power.

Rome is one of the most interesting choice. It's a republic, so you will have to deal with the political plays of your power-hungry senators and be wary of the loyalty of your generals. An unsatisfied general can declare independence, and the more legions he has under his command, the worse for the Republic. Especially if his name is Julius.

Another interesting choice is either Carthage or Egypt. Both countries have large territories, and strong economies. Carthage is a power at sea and can decide about everything that happens in the Mediterranean Sea. Egypt has the most fertile lands in the game and the most populated regions. Thanks to this, gold from trade and taxes flows into your treasury like a river. With the appropriate funding you are able not only to efficiently lead your country, but also wage wars and conquer new territories without any problems.

Assign generals and admirals. Without them, your armies won't be able to fight efficiently. If an army doesn't have a commander, all units will receive -25% to morale penalty. Commanders also have special skills that can make your army more efficient on a battlefield. Pay attention to your generals' loyalty - if they rebel, they can take some of your soldiers with them.

Increase gold and human resources income. Both factors are important in keeping a large army. Raise taxes - in times of peace, army, fleet and forts don't have to get full payment. Build barracks in densely populated towns - you will get more recruits for your army.

Check the political situation. Check your relations with neighbor nations before you start expanding your territory. You can also check the political situation in other nations by clicking on the diplomacy tab. It may turn out that the nation you are about to conquer is a vassal of a powerful imperium or is in alliance with a few powerful nations.

Get a Claim before you declare war. This will cost you a lot of gold and Oratory points. However, you won't regret getting it. By having a Claim, you will have a reason for waging war. You also won't lose Stability points. Go to the diplomacy mode, select a nation, and select Covert Actions.

Assign National Ideas. You usually don't start with an assigned National Ideas. They are bonuses useful for your entire nation, usually focused on a specific field, e.g. maintaining your army or developing provinces. If you choose the right National Idea, you will get additional power points and special bonuses unique to your type of government.

Choose an Omen or increase the Stability. Omens grant you various bonuses. At the beginning of the game, you should pick up a bonus to taxes or to potential social unrest. If your Stability is equal to or below zero, you absolutely have to increase it. You will avoid unwanted problems like, e.g. an increase in social unrest or a decrease in loyalty.

Always use all trade routes in the capital. These routes are extremely valuable - an excess of resources in a capital province grants bonuses to the entire nation. Check all the resources you can import and select the right bonuses or import strategic goods that will allow you to train better army units.

Technology and upgrades. You get Technology points by having more citizens and by assigning scientists. New inventions are unlocked every level. Choose bonuses that will help you reach your goals, e.g. making citizens happier or increasing profits from taxes.

Pay attention to who will become the next ruler. Your ruler determines the number of received power points. Their special characteristics have an impact on various aspects of your nation. Pay close attention to who wants to become a new ruler or to which political party has the biggest support in the Senate. When a new consul gets picked, their political faction receives bonuses. When you start a new game, you don't want a populistic party to win - this will increase the costs of power points and have a negative impact on social unrest.

Watch out for Tyranny, Aggressive Expansion, and Corruption values. All of them have a negative impact on the diplomacy, relations with other countries, social unrest, and happiness of your citizens. They also increase the amount of gold you have to pay for power points.

Imperator: Rome has numerous useful Map Modes that will help you during the game and make the management easier. Thanks to these Map Modes, you will be able to analyze the situation on the map fast without clicking numerous times and checking each of the regions separately. 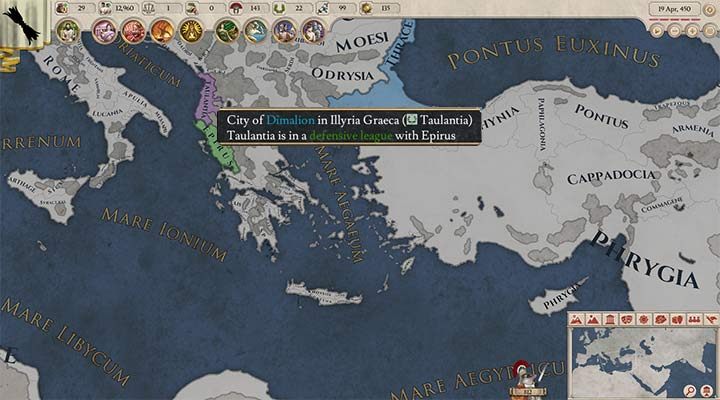 Map modes will enable you to achieve better control of situation in your state, monitor the status of economy, unrests in the provinces and relations between your neighbors.

The game has the following map modes:

Geographical. Check the lands you plan on conquering. You can quickly check which terrain is a desert, which is covered with trees, where are the mountains. After that, you will be able to adjust your tactic to the terrain.

Political. You will spend the majority of your time in this mode. All towns and provinces are marked with the color of their nation. Also, these places will have the name of their nation displayed above. Use this mode to know who owns a given territory.

Religion. Imperator: Rome has various religions that have an impact on the stability in your nation and specific regions. Use this mode to learn which religion is dominating on the terrains.

Provinces. This mode displays names and borders of all the provinces. Useful when you want to get a Claim to these lands.

Goods for trade. Use this mode to learn which goods are produced in a specific town and on the entire map.

Population. Check the demographic level in each of the towns. The brighter the color, the more citizens a given town has. Move the cursor over a town - the window next to it will inform you about its population divided into classes.

Trade Routes. Check all the provinces that can be connected with you via trade routes.

Fortifications. Check which town has a fort and what area they control.

Regions. Works in a similar way to the provinces mode - divides the map into regions.

Supplies. Use this mode to check the supplies level in the towns. Very useful in maintaining your army.

Opinions. Check the opinions on your nation. You can also select a different nation and see what other countries think about them.

Unrest and loyalty. Check the situation in your nation and see which provinces are about to riot.