In the world of the Imperator: Rome there are still numerous plots that are not occupied by settled tribes, republics or monarchs. Some areas are still a cluster of warlike barbarian tribes. Other regions are occupied by the pirates that are attacking your customers. And, your inner boundaries, may be vulnerable to a rebellion of the local population.

Rebels in Imperator: Rome work a little differently than other games from the Paradox Studio, like Europa Universalis. The revolt/rebellion/uprising will always appear in an organized manner, that is, they will have their own leader, the provisional government and certain borders. With the rebels, everyone will be able to establish diplomatic relations. You will never meet a single army, which just robbed and conquered your cities. Riots always cause rebellions.

The situation in Rome is stable, although 9% of residents are dissatisfied. The progress of the rebels can be found in the nation overview or in the diplomatic overview.

Each city has its own level of anxiety. If happiness per capita falls below 50%, it will start to generate anxiety (uncertainty) points. The more anxiety there is in a city, the less taxes and human resources such a city produces. If the level of anxiety/uncertainty increases to 10, you will not be able to train the army and put facilities in this city. If 20% of the province's residents who belong to a foreign culture are disloyal to your government, the Risk of Rebellion bar will begin to slowly fill up. A warning will also appear on the main game screen. 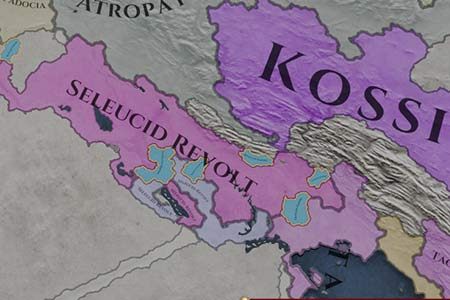 Empire of the Seleucids is in disarray - rebellion broke out, which took a large part of the previous government.

Once the bar gets to full all disloyal provinces with people from other cultures are going to unity in a huge rebellion. The rebels get their color and army. There is one very important difference when you fight the rebels. Unlike war with other nations, captured cities are not occupied, but immediately assimilated into your state. So do rebels, so having a war with this nation is extremely difficult. Remember that you can use a random situation with your neighbors and take the side of the rebels. Thus, you will weaken the economic and military environment of the nation. You can also actively speed up an outbreak of rebellion in another state when you choose to support the rebels. If a riot breaks out, your state will automatically join the rebels.

Barbarians - people from different tribes, which are not friendly towards any nation. They live in a few zones that are inaccessible to the army, and you cannot conquer them in any case.

There are two areas in the Northern region of the British Isles, in hands of barbarians. The Horde of barbarians has recently set off from Northern Headquarters (1). In another region (2) the barbarians are still growing in power, but have not yet formed an army. A Horde from the North has started to conquer neighboring city (3). You can set a special preview mode to quickly find the barbarians and check their current level of power (4).

Sometimes you can negotiate with barbarians, and even encourage them to settle in your cities. Which is better than destroying cities with hordes of barbarians.

The horde of barbarians is a special army which main purpose is to sow confusion and chaos. The size of the army also depends on the strength of the barbarians in their headquarters. The longer the region is not creating an army, the greater the horde may rise that has to be defeated by nations that reside nearby. If the barbarians capture at least one city, it is possible to establish diplomatic relations with them, although the number of options is limited: 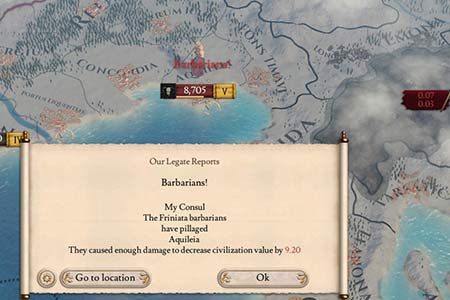 Every city that will be conquered by the barbarians, not only loses its population, but also the level of civilization. Therefore it is necessary to erect forts in the area, or to keep troops, especially if the ratio of Strength of the Barbarians is high. Otherwise, you will lose the civilizational progress that is needed to shut down the region with the barbarians. If you defeat a horde of barbarians, the general will get gold and your cities some slaves.