To begin any war in Imperator: Rome, you need a casus belli, that is the reason for the war. Any aggression must have some justification, otherwise you will not be able to fight with someone.

Not every nation can be targeted. You can only declare war on a nation in your diplomatic range. You can check this by turning on the political map mode. Countries highlighted in gray are out of your reach. You cannot trade with them or accept any diplomatic relations. Declaring war without casus belli is not recommended because you will lose stability points. For some, you will only get access under certain conditions and in certain situations.

Below is a list of possible reasons for war:

During every war you want to conquer the land, get money from the vault of the enemy, liberate the conquered state, or impose a vassal state to the enemy. Each of these actions is available when signing the sue for peace and depends on the results of the war. Casus belli also plays an important role here: 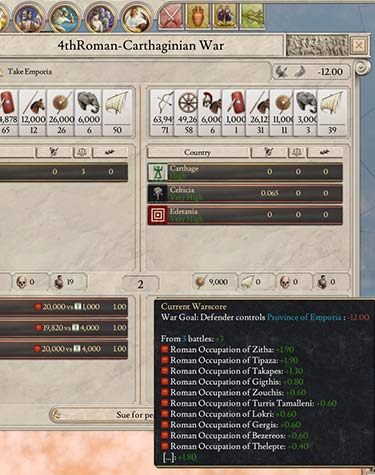 Rome won many battles, but still does not control the province of Emporia, which was the goal of the war. The defender is currently gaining 12 points as a result of the war, although theoretically losing.

1) Warscore is carried out in several ways, such as victory in battle or the capture of the capital, but most often should be aligned with the "casus belli". If your reason for the war was the seizure of the province, you must occupy the entire area to start gaining points. If the enemy captures at least one city in this province, your progress in the war will disappear in favor of the enemy. Hostile states often do not accept the conditions of signing the peace pact if you have not reached the reason to war. 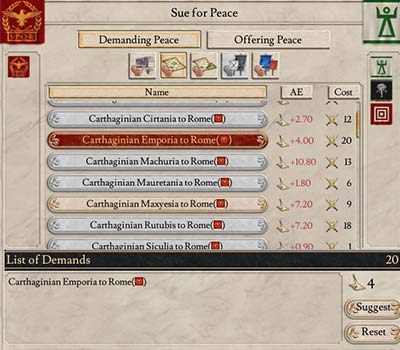 The province of Emporia is worth far less points of aggressive expansion, as it was the target of the war.

2) Any demand in the negotiations will also be noticed at the points of aggressive expansion. This is a negative factor that determines the militancy of your state. The higher, the more reluctant you will be to neighboring nations. If you take the lands that are not eligible, you will receive more points of AE, than in the case of claiming and obtaining rights to a selected province. It's similar with any other reason to war. Therefore, when planning a conquest, it is worth bearing in mind which reason you are going to choose and whether you have the opportunity to perform it during the war. Even if you want to conquer a large area of a hostile state, you should choose a province that will be easier and faster to conquer. 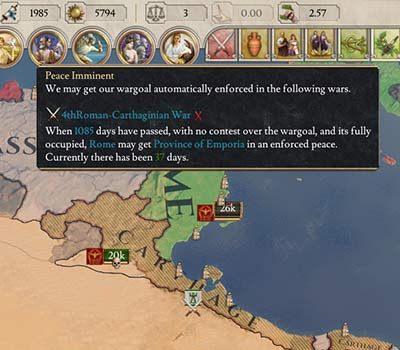 3) If you have achieved the objectives of your reason for war for a long time, you may receive information about the automatic signing of peace. If you do not sign the peace pact in the given time, it will be automatically turned on. It's worth to conquer some land and capture as many enemy cities as possible during this time. You often get extra slaves or money if you conquer enemy capitals.