Each army can learn a particular combat style that will help you gain an advantage over your opponents in Imperator: Rome.

Tactics are represented by animal symbols in the army preview window (upper right corner of the window). Tactics offer bonuses to damage if a style fights against a particular style. Usually a tactic has an advantage over two other tactics, but it also has a penalty to fight two more tactics. For example, Triplex Acis tactics provide a bonus of up to 25% against phalanx and skirmishing, but also a 10% penalty against two: deception and hit-and-run. 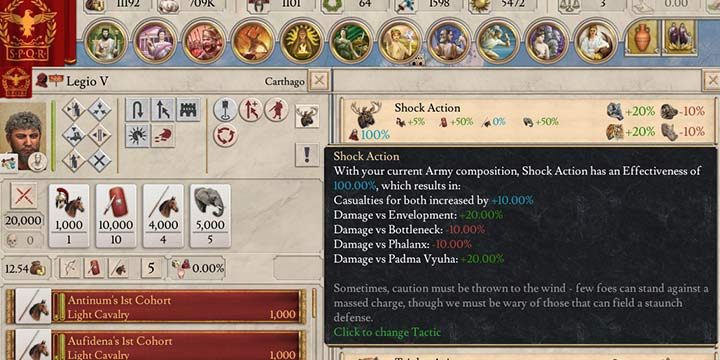 Legio V has chosen a tactic that provides a +20% damage bonus for all units when fighting against a particular enemy tactic.

To a large extent, tactics rely on the composition of the army. Sometimes you will get bonuses of only a few percent if you have a very diversified army. This is due to certain rules that apply to tactics. Each has its own requirements for troops that can use these tactics effectively. In addition to the particular type of troops, an army must have an appropriate composition of units. 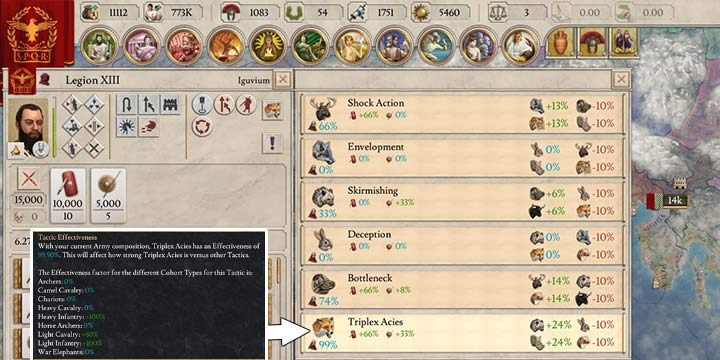 The best tactic for Legion XIII is the Triplex Acies, as it is compesed only of light and heavy infantry. Light infantry substitutes for cavalry, but may have problems fighting a real enemy cavalry on the flanks.

In order to make the most of a given type of engagement, you must have troops in your army that ensure the effectiveness of the tactic. It is best to bet on troops with the highest efficiency for a given tactic - in the case of Triplex Acis, heavy and light infantry provides 100% efficiency. Thanks to that, each chosen unit in the army will increase the capabilities of a given tactic and the army will receive the maximum bonus. The more units, the more the efficiency of troops is distributed more between Cohorts. For example, if you have 20 units in the army, but only 10 of them are heavy infantry, the army will gain 50% efficiency for Triplex Acis. This will translate to a 12.5% damage bonus against two other tactics.

Some tactics are unique for a specific military tradition. Most tactics have a maximum bonus of 20% additional damage, but if the army's composition is not optimal for the tactic, you'll receive a smaller bonus. Most of the unique formations provide a 25% bonus for the army against selected types of tactics. Each tactic is less effective against two chosen tactics and has -10% damage penalty against armies using selected tactics. Knowledge of available troops and tactics chosen by the enemy can be crucial to winning battles and wars.