Taxes are the main way to earn money and gold, which is necessary for the proper administration of each nation in Imperator: Rome. A strong economy is the foundation of a strong state. Below you will find tips that will help you to understand the economy of Imperator: Rome. You will be constantly struggling with financial problems and think how to earn money, and where to get the gold to cover the costs of maintaining a large army.

Commerce is another aspect of every city to increase your profits. You can also build and improve 4 buildings that are located in each city.

Each city has 4 slots for buildings. Every city can hold all four types of buildings, provided they have enough space. You can increase the building level each time the city population increases by 10 inhabitants (Pops). If you lose even a single citizen in any way (death, slavery through enemy conquest, migration), you'll lose one random building or building level. Take care of your population, to avoid spending money on rebuilding lost structures.

You can influence taxes, commerce income and tributes by changing your Economic Policies for income. This enables you to increase the amount of gold you earn, at the expense of other areas of the state, such as slower technological development or increased unrest in the provinces. This is especially useful in initial stages of the game, where you need a lot of money. If you lower your income, you'll receive a bonus that will help you make up for lost money e.g. it will lower dissent in whole country. 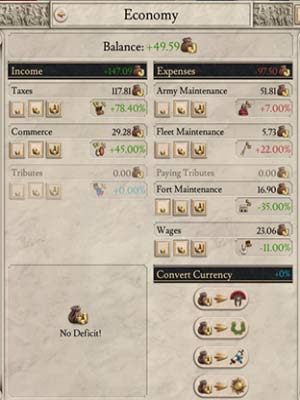 In the economy window, you can view taxation levels and your expenses on military, fleet, or wages.

In the economy window, you can decide upon your spendings on wages, army, fleet and fort maintenance. The set value affects the loyalty of your army and characters, so apply changes delicately. It is recommended to lower the expenses on military during peace, but raise them just before a planned declaration of war. Thanks to that, you'll be able to attack your opponent instantly. Most of the time, other nations lower their expenses on military during peace. You can use that and quickly defeat even the bigger armies in the initial days of the war.

Every region is governed by a governor who decides upon the policy for each province. This way, you can increase your earnings, or placate people in conquered regions. Governors decide upon the policies on their own, which they deem best. You can change their orders manually, by spending Civic points. 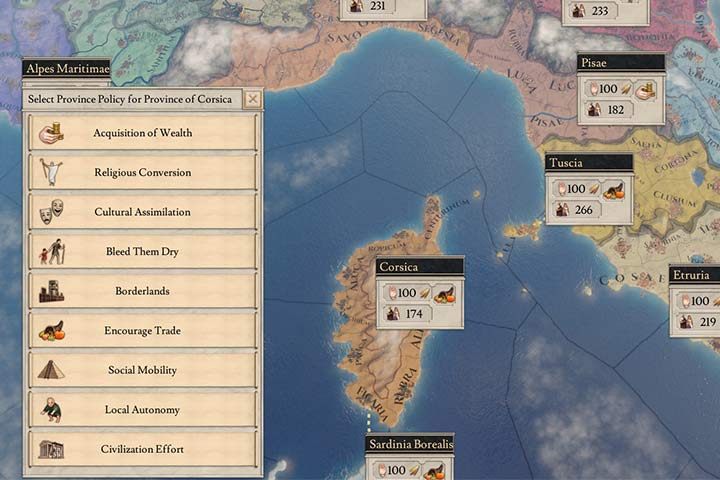 The list of policies for each province is quite long. The map filter which enables you to view the world divided into provinces or governor filter, facilitates viewing and managing policies in your country.

Provinces can have following policies:

Acquisition of wealth, Bleed the dry, Encourage trade -These three policies influence the income from taxes and trade. You can use them to fill your coffers, but some of these policies also have a negative influence on the province.

Religion conversion, Cultural assimilation - Policies which increase the dissent in your provinces, but can help you change the leading religion or culture in your country.

Social Mobility, Civilization effort - If the division of social classes in the province is even, these policies will help you change the class of your citizens. You won't have to invest power points in social growth. Social Mobility will especially influence the balanced division of classes, this is one of the few ways of placing citizens down the social ladder.

Borderlands - offers a big bonus to manpower and increases the strength of forts. This second bonus is very useful in provinces bordering the hostile countries. Thanks to this policy, your forts will hold up much longer when besieged.

Local autonomy - this policy will come to be useful when you conquer a province with unstable situation in the cities. Even if income and production will be lowered, you'll be able to keep the region through lax treatment. 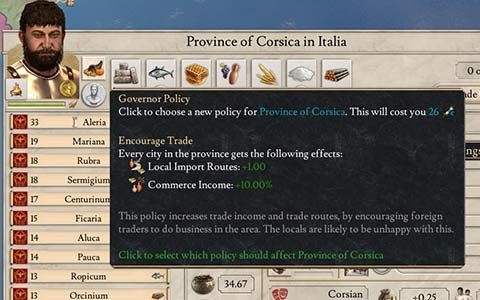 Corsica has a set policy that encourages trade. You can order the governor to change the policy by spending Oratory points.

Manual management of politics is very useful in the initial stages of the game. Thanks to it, you'll be able to maximize your income and customize the region to your needs. In the later stages of the game, avoid interfering in governor's affairs - do so only if the region is very important or your action is necessary. Remember that each change requires Civic points. As a result, it is recommended to think through your decision, to avoid wasting this valuable points.