In "A house Built on Sand", you can find seven disguises. The array is not too vast, and there also aren't too many valuable items here. Below, you will find a list of all the available disguises (the best one is that of the guard's), as well as a list of the most important items that you can find in Marrakesh. 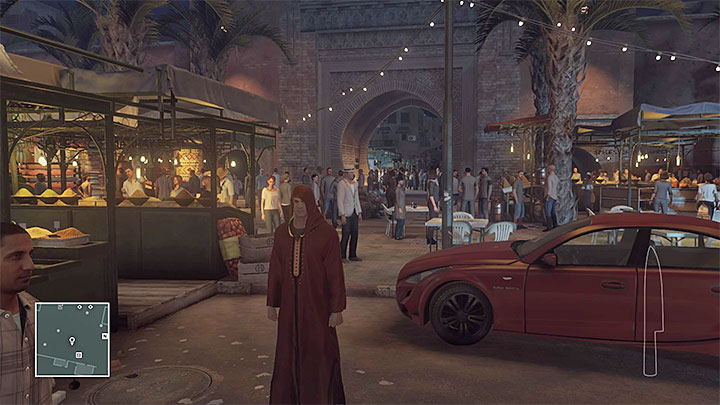 You can find shopkeeper's disguise without any problems, right at the beginning of the mission. An unused one is inside the trailer (M10,5). Unfortunately, this disguise is not going to take you far, because shopkeepers do not have any special authorizations. 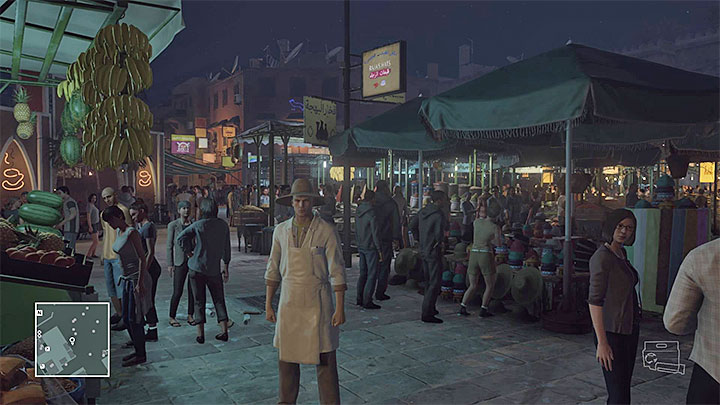 It is not that easy to obtain food vendor's disguise, because majority of them can be found in public access areas. The only exception is the vendor, who occasionally stops by the horizontal pipe in the Western part of the map (M10,7). You can take him down there silently. While wearing this disguise, you can poison Mendola more easily, after he reaches one of the stands. 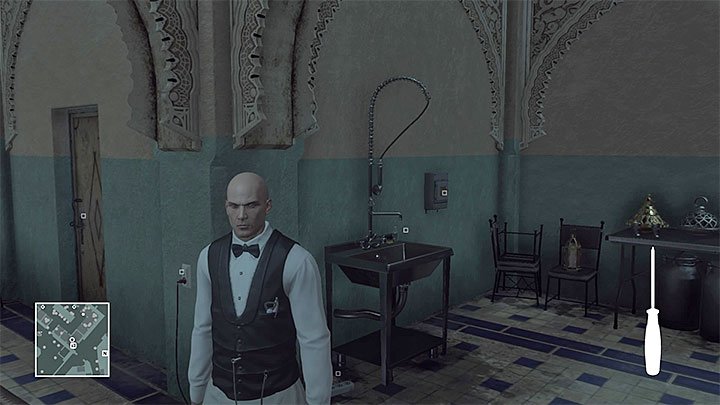 You can find waiter's disguise in Shisha Café's staff room (M10,5). While wearing it, you will be able to access several new areas in the VIP-only area in the Cafe (e.g. the room with the oil lamp) and use the mechanism to raise the water level in the pool. While at the café, however, you should watch out for the other waiter traveling around the area, who can blow your cover. 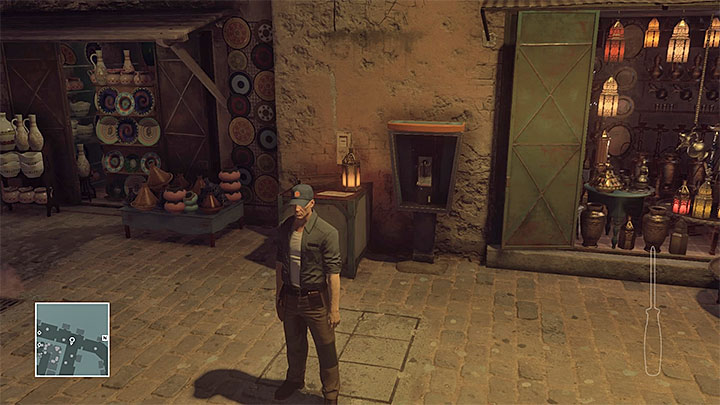 Handyman's disguise may come in handy after you arrange for one of the accidents that will be supposed to kill Matthieu Mendola. You can find an unused disguise in the utility room (M10,7). To open the room, you only have to obtain the key which is near the spot, where there is another handyman repairing the phone booth (M10,4). After you wear it, you can sabotage the phone booth, whose electrical discharges will kill Mendola. 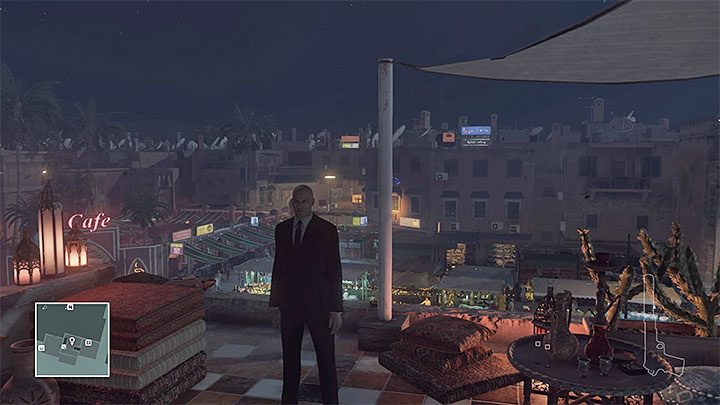 Inarguably, this is the best disguise that you can get for this mission, because as bodyguard, you will be authorized to travel around the entire map, including the VIP-only area in the café, and the rooftop of the building, where the two targets are to meet. An easy way to obtain bodyguard's disguise is by reaching the North-Western part of the map (M10,19). There, you will encounter a sick bodyguard, whom you can easily eliminate. Just remember to conceal the corpse away and distract the other guard with a tossing coin, because he can blow your cover. 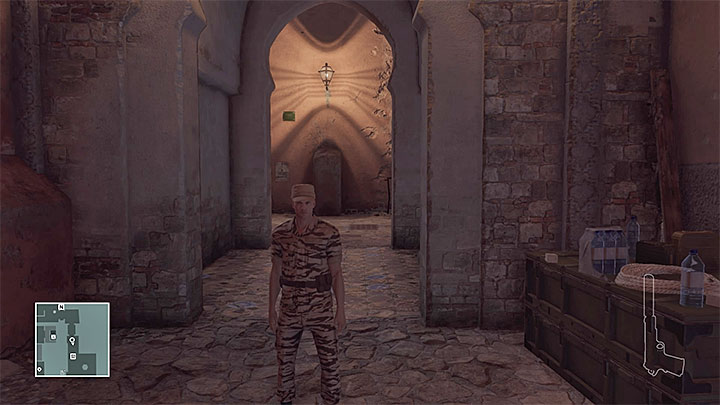 This disguise is not too useful in this mission and you can ignore it, unless you want to obtain The Chameleon challenge (wearing all available disguises). In such a situation, you can attack one of the soldiers patrolling the narrow street between the starting point and the school. 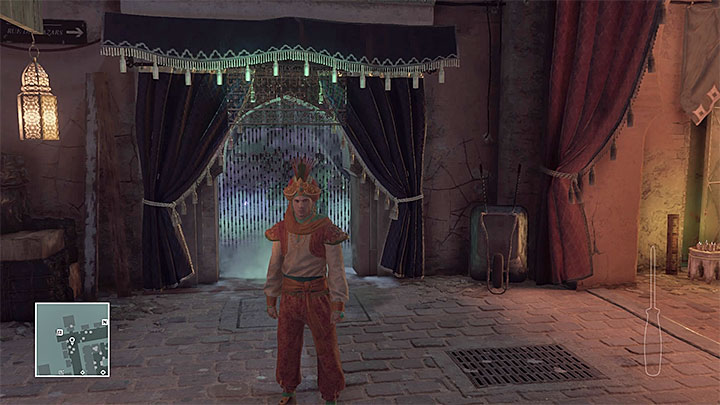 Fortune teller's disguise is connected with one of the methods of assassination of Matthieu Mendola. The fortune teller is staying in the building in the Northern part of the map (M10,5) and you can encourage him to leave by sabotaging the nearby generator. After that, you can return inside as fortune teller, eliminate the client and wait for Mendola. 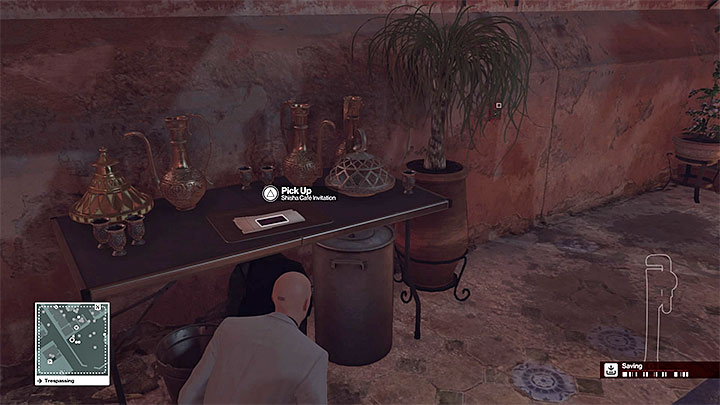 The invitation allows you to enter the VIP area in Shisha Café (M10,3), which is the area where Kong Tuo-Kwang is staying. The easiest way to obtain the invitation is to steal from the Southern part of the café, behind one of the tables served by the waiters (M10,3). This area only seems to be inaccessible, because you can approach it from the west and, after the waiters turn away, you can hop over the low wall and snatch the invitation.

There also are two other ways to obtain the VIP invitation:

Important note - People that have VIP invitations on them are allowed into the VIP area and are not searched. You can use this to your advantage, to sneak firearms, or an explosive, into the café. 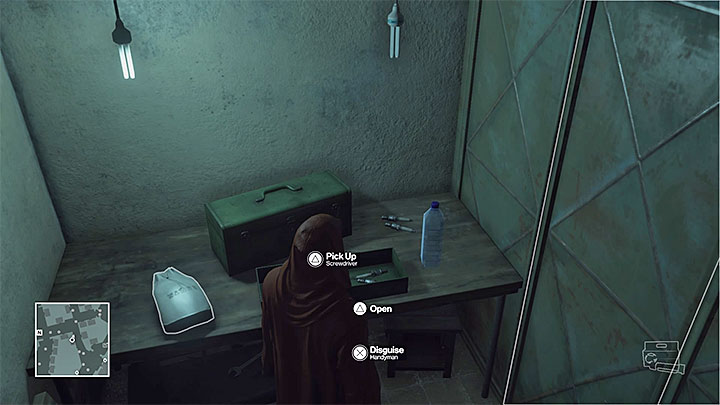 Handyman disguise is in a small utility room

Handyman disguise is in a small utility room in the central part of the map (M10,7). The room is locked and using the lockpick, or crowbar would be risky. Instead, it is better to find the Utility room keycard, which you find next to the handyman repairing the phone booth (M10,4). You can use the disguise to sabotage the phone booth and eliminate Matthieu Mendola this way. 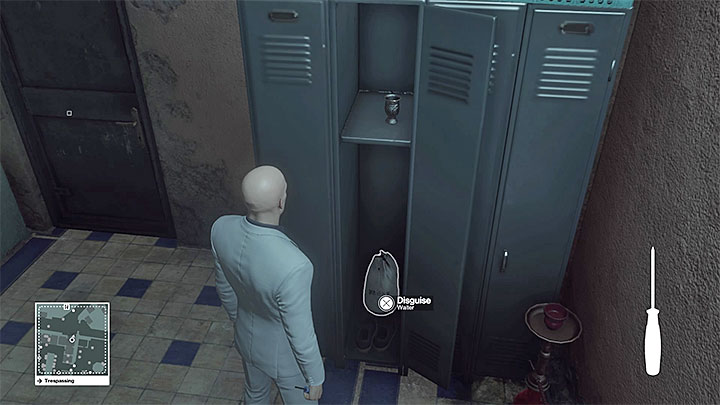 Waiter disguise is inside one of the lockers in the staff room of the Shisha Café (M10,5). You should obtain it, if you want to assassinate Kong Tuo-Kwang in the café, because it will allow you to perform several "forbidden" actions, such as cause a gas leakage, or raise the water level in the pool. 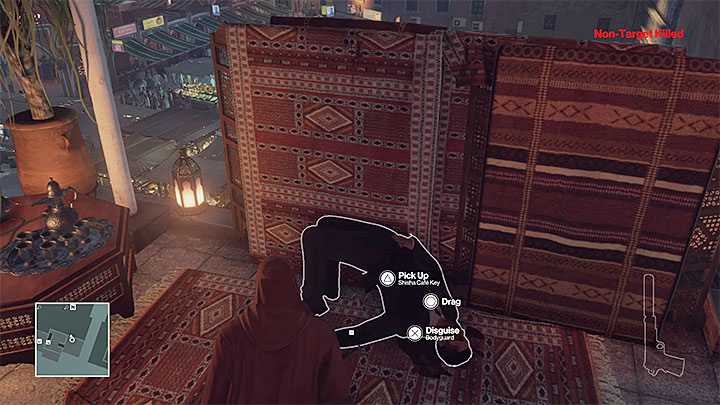 You can get the key, e.g. from the bodyguard in the carpet shop

Obtaining this key may make it easier for you to infiltrate the VIP area in Shisha Cafe (M10,3). You can obtain the key from the bodyguard, who went away to look at carpets in the shop in the Western part of the map (M10,9). After you get there (which has been described on the next page of this guide), you can eliminate the guard and take the key.

There is another key behind the counter in the café (M10,4). Steal it only if you want to make reaching the staff room (M10,5) easier (e.g. to disguise yourself as a waiter). 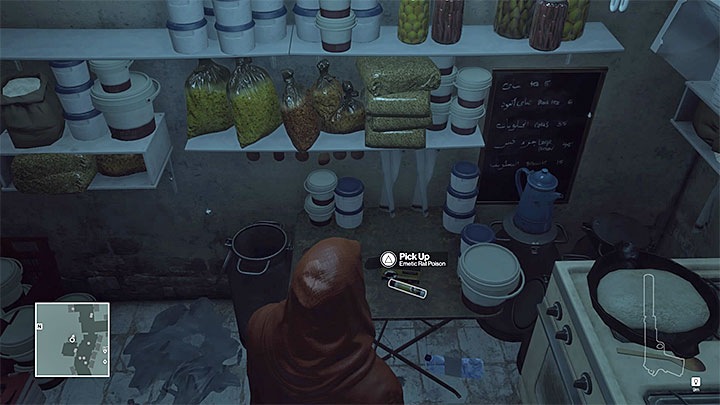 Rat poisons are in several locations

You can find Rat poison in several locations - in the Shisha Café bathroom (M10,10), in the location where Mendola and Kwang meet (M10,12) and in many stashes and shops on the map (M10,14). You can use it to poison both of your targets, but it is better to take lethal poison on the mission with you. 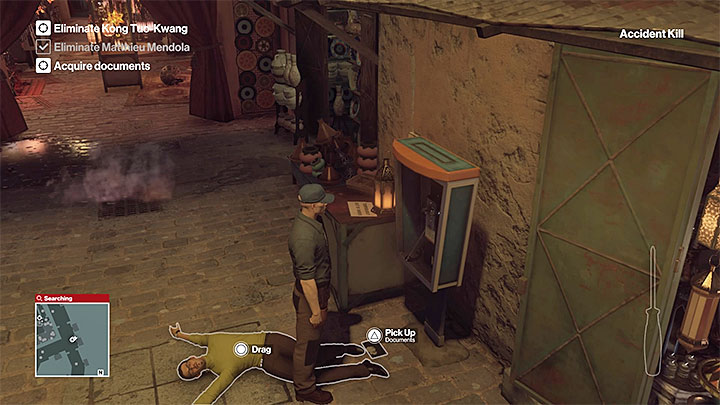 Search around by Mendola's corpse

Obtaining documents is one of the objectives of the mission. You find them on Mattheu Mendola in the spot where he dies. To learn more, see the last page of this chapter.