In The Icon, there are only four obtainable disguises and also, the map does not abound in items of interest. Below, you can view the most important ones below. Especially, you should pay attention to hints concerning the obtaining of the security outfit, thanks to which you will be able to access all of the locations connected with the assassination. 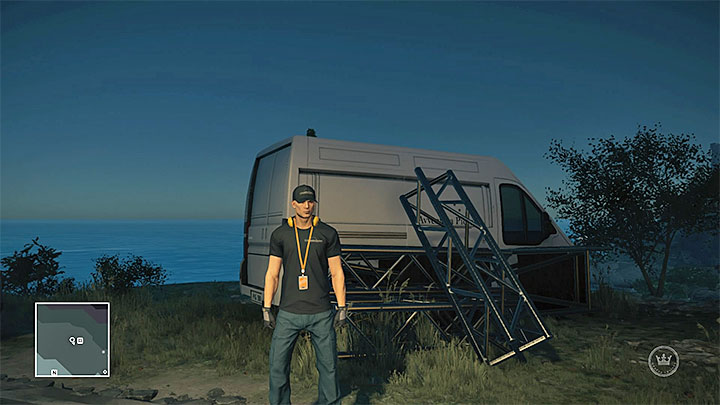 Wearing his outfit will let you move around a large portion of the movie set. In particular, you will be able to access the central part of the main square, where there are all of the props. Also, you will gain access to the Eastern part of the set, where there are generators and Dino Bosco's trailer. Unfortunately, move crew members cannot access the Northern building, where there is a fuel case (M9,13), nor the Western area, where there is the pressure control console for the ramp (M9,9) and the pyrotechnics trigger (M9,10). In this outfit, you can sabotage the generators (M9,7) and the gas lamp (M9,1), without taking the risk of being spotted by other people there.

The easiest way to obtain this outfit is by luring away one of the crew members, close to the starting point (M9,3), which you can use, e.g. a coin for (there is one on the ground nearby). There is also an outfit next to the toilets in the Eastern part of the map (M9,7), but there is no point in trying to get there, because this is a restricted area and there also are several people there, who can easily spot you as you change. 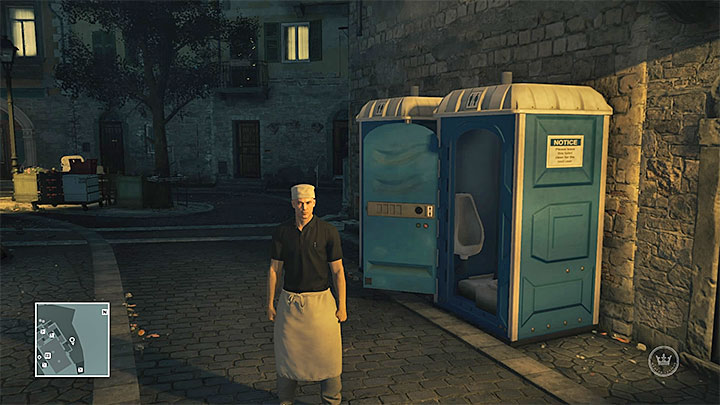 There are not too many ways in which you could benefit from using this one. It only allows you to visit the parts of the map that are generally accessible anyways. The only exception is the café (M9,3). The main reason that speaks for this outfit is that it will allow you to add some poison in the location where Dino Bosco meets his fans (M9,1). While wearing this outfit, you can do that without risking having your cover blown.

You can obtain this outfit by, e.g. attacking one of the kitchen assistants in the backstreet of the main building (M9,6), or in the café (M9,2). However, it is much easier to reach the van with an extra outfit inside (M9,3). You just have to remember that you mustn't be spotted while taking it away. 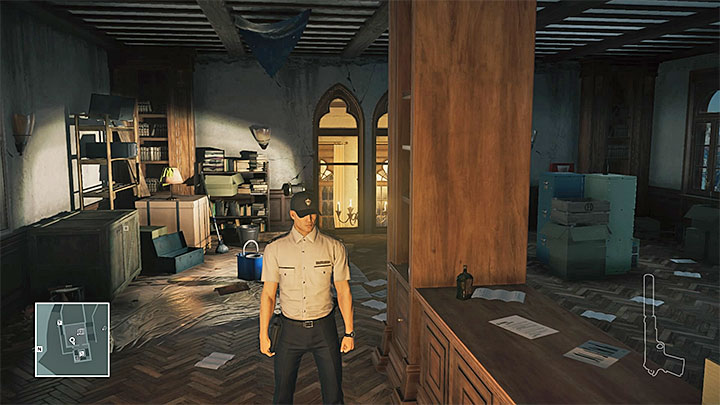 This one is most useful outfit in the entire mission, because it allows you to move around the entire map. You will only have to watch out for single guards, who may blow your cover, even though you are wearing the uniform (these are the guard next to the cafe, one by the trailer entrance and one patrolling the area by the pyrotechnics trigger).

To obtain this outfit, it is a good idea to break into the café/the town hall and reach the tower (M9,4). The tower is being occupied by two people (and additionally, by a movie crew member). You can quickly shoot them, or lure the security guard downstairs, by turning on the radio and tossing a throwable. Note - do not attack the security guard, because the movie crewman looks in that direction occasionally. This may result in starting the alarm, if you do not eliminate the movie crew member quickly enough, or if you do not drag the guard's corpse away fast enough. 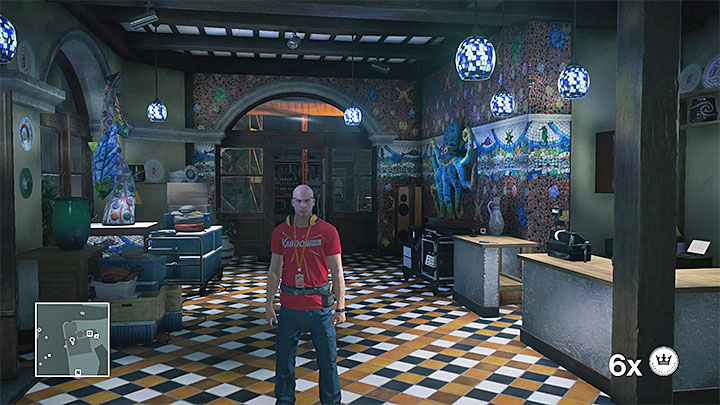 Wearing this outfit will make it easier to operate machinery on the set, but also in this case, you have to watch out and make sure that you are not spotted prematurely by the rest of the SFX crew. Especially, you should be wary of two of them working around the pressure control for the ramp (M9,9).

It is not too easy to obtain this outfit. You should plan on obtaining it only after you have the Northern building with the briefcase (M9,13) (preferably, while wearing the outfit of the security guard). You can try and attack one of the specialists after he enters the building, but you can be spotted by other people then. It is safer to open the door to the staircase and toss any throwable there, to attract the SFX guy. Killing him on the stairs will reduce the risk sounding the alarm. 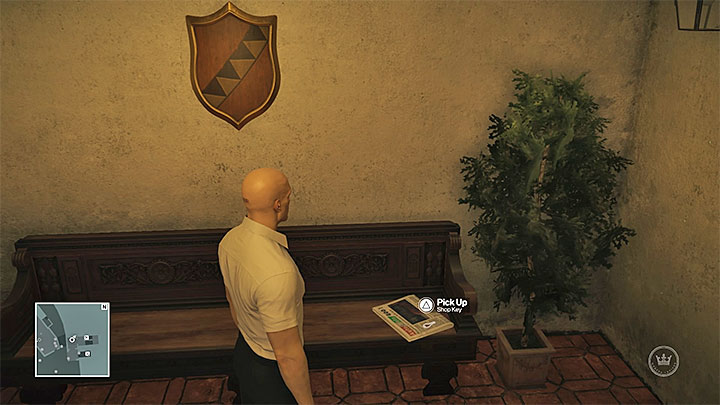 Shop key can be found in the area of general access, near the café entrance (M9,1). Thanks to the key, you can open the café itself, but you can also use it to open locks of some other shops in this part of the map.

Note - The café is off limits for patrons, so make sure you do not enter there without wearing an outfit first, or while wearing a wrong one. 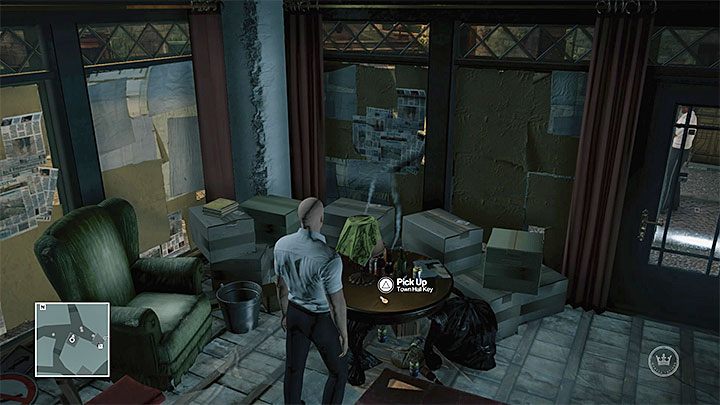 Check out one of the smaller buildings

Town hall key is inside one of the smaller buildings in the Southern part of the map (M9,4) and there are no problems involved in obtaining it. You can use it to access one of the higher levels of the town hall, including the security room. 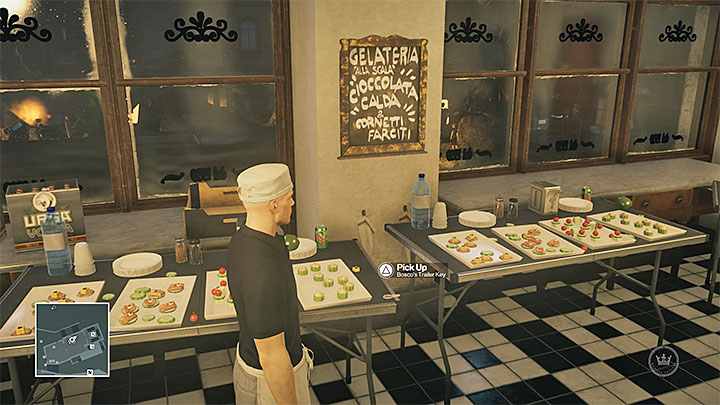 The key is in the café

Trailer key can be found in the café (M9,5). It is not as useful as the rest of the keys on the list, because Bosco's trailer (M9,5) is being watched by two security guards. Therefore, it is a much better idea to sneak into the trailer across the hole in the roof of the trailer. 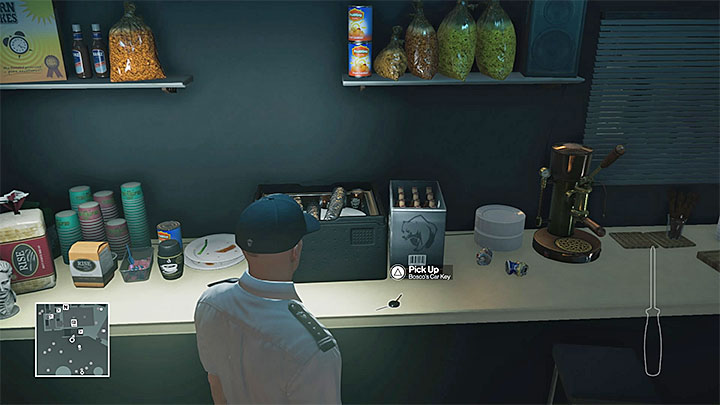 After you obtain the key, you can use the car as an escape car, after the end of the mission

Car key can be found in Bosco's trailer (M9,5). After you obtain it, you will be able to escape the mission are in the car parked near the starting point (M9,2). Without the key on you, you would have to reach the alternative route across the old town gate. 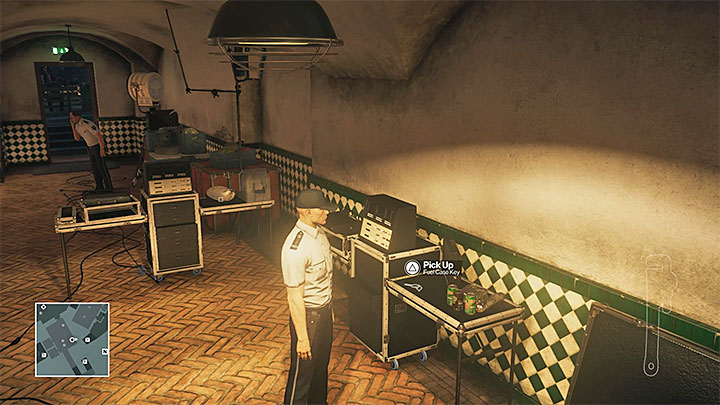 Examine the vicinity of the toilets

Case key can be found near floor 3 toilets (M9,7) where you can get wearing any outfit. The key matches the lock of the case in the Northern building (M9,13), and inside you find fuel that you can use to stage an accident on the set. Without the key on you, you would have to use crowbar or lockpick to open the case. 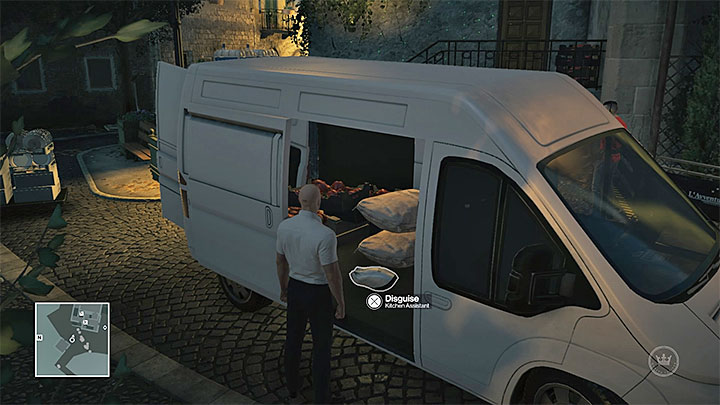 Steal the outfit from the van parked nearby

It is recommended to obtain the Kitchen assistant disguise only if you are going to poison Dino Bosco (M9,1), because you can do that then, without having your cover blown. You can find this outfit in the van parked in the back alley of the town hall (M9,3). Before you put it on, make sure that it is completely safe to do that here. 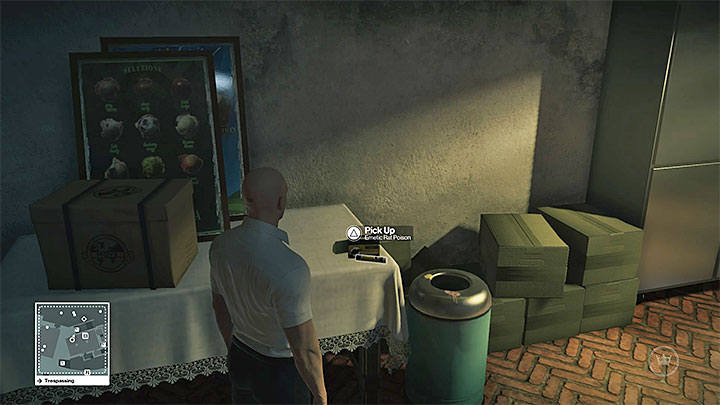 You can find poison, e.g. in the café's basement

Rat poison can be found in several locations on the map, i.e. the café's basement (M9,2), in the café (M9,3) and in the Northern building (M9,13). The basic thing you can do with it is poison Dino Bosco in the fan area (M9,1), although you can also use it elsewhere, e.g. to poison a movie crew member or an SFX guy. 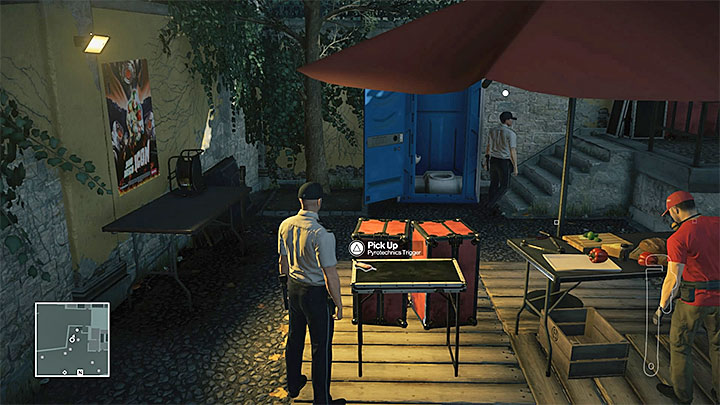 Watch out for the people working around the trigger

The trigger is in the Western part of the main square (M9,10) and taking it is one of the necessary steps to be taken, for the elimination of Dino Bosco as a result of pyrotechnics explosion. Regardless of whether you are wearing the outfit of a security guard, or a SFX crewman, you have to watch out, or your cover will be blown by another member of the crew.