There are nine sets of disguise that one can use in "Freedom Fighters". If this is your first visit in Colorado, try to obtain one of them as soon as possible (e.g. Militia Soldier) - Agent 47 in his default outfit will be attacked immediately, regardless of his location. 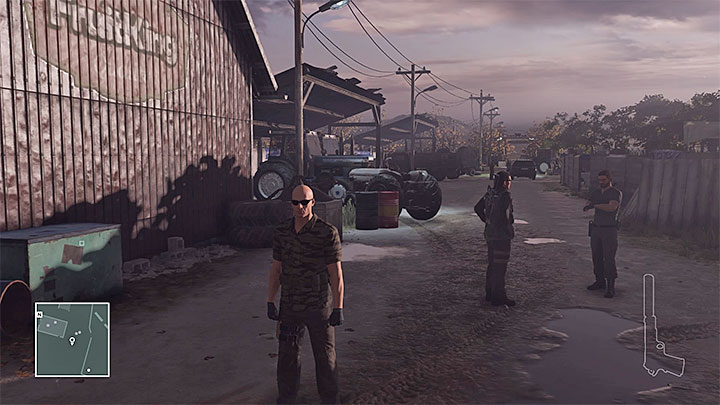 A basic disguise in this mission. Soldiers are located across the entire farm but if you are playing for the first time, it's best to seek a target in the south part of the farm. E.g. you can eliminate one of the soldiers by the baler (M7.8) or the generator (M7.34).

Soldiers can access basic areas of the farm, e.g. the south field, the middle square, or the large orchard. They are not allowed to access the explosives test zone, the barn, the shooting range or the main house. 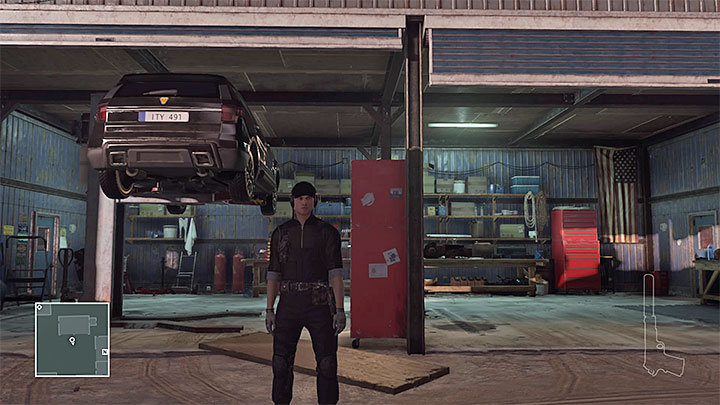 Although it is harder to obtain this disguise, it does not provide any additional "benefits". Technicians can be found on the central square of the farm (M7.17) and have headphones. We do not advise assaulting one of them in a public place but it is possible to drag a technician away from his colleagues. One can decide to sabotage a generator located by the east entrance (M7.6). Once a technician approaches the generator, you can strangle him and drag his body to a nearby locker. A technician's disguise can also be found in a building with a Point Man inside (south-west part of the farm) (M7.7). Before you can actually put it on, you will have to kill or distract at least enemies.

Technicians can access basic areas of the farm, e.g. the south field, the middle square or the large orchard. They are not allowed to access the explosives test zone, the barn, the shooting range or the main house. 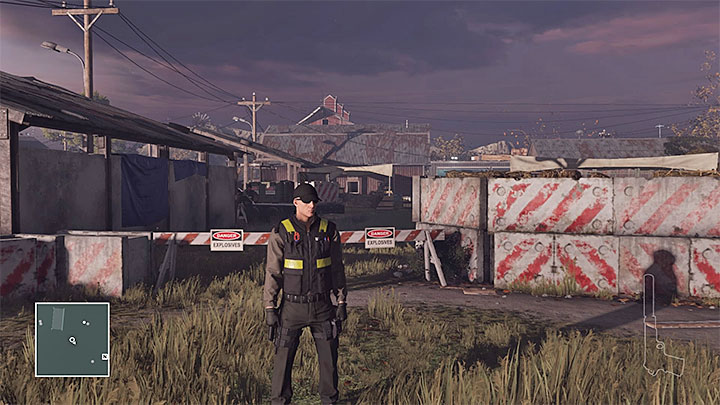 Members of this faction are located in a secured area in the south-east (M7.14) and wear vests with yellow elements. This location can be accessed by specific units, and thus you will have to sneak upon a specialist to take his uniform. It's best to access the test zone from north or south. You may also use a lonely barn (M7.16). The best way to eliminate a specialist silently, is to reach the baler (M7.15) and activating the radio. Once one of the enemies appears, attack him and throw his body into the baler.

Apart from the basic areas (those available to the soldiers and technicians), explosive specialists can access the explosives zone. However, one needs to remember that other specialists from this area (e.g. specialist planting the explosives) can recognize Agent 47, even if he has a disguise. 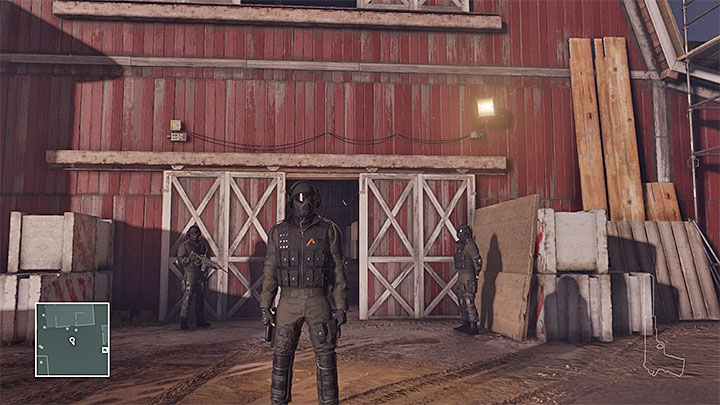 These units can be spotted inside and near the large barn (M7.19) and the shooting range (M7.20). Both areas are located in the south part of the farm. Most Militia Spec Ops are divided into groups of two, which makes attacking an officer harder. A good place to obtain a disguise is a building in the south-west (M7.8), where the Point Man is located. You can e.g. poison him and pave your way to the target (hide the body in a nearby locker) or encourage him to investigate the bathroom after sabotaging the sink.

There is also one spare uniform on the upper level of the barn (M7.12) but it is protected by two opponents. Distract or eliminate them if you want to obtain the uniform.

Militia Spec Ops can enter the shooting range and the large barn (where Maya Parvati is located). Furthermore, they can travel across main parts of the map, accessible to soldiers and technicians. 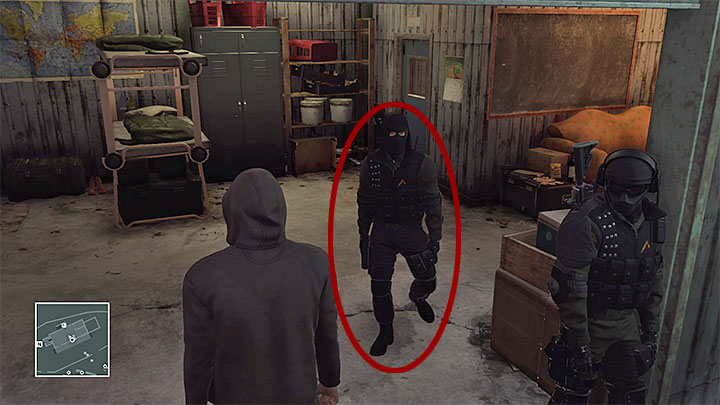 One of the unique uniforms as there is only one Point Man on the farm. He can be found in or near a small building in the west part of the map (M7.8). The person will hitch and will wear a hood and a balaclava (see screenshot).

You can shoot him but then you would also have to eliminate Militia Spec Ops who walks beside him. Thus, it's better to use surrounding objects to your advantage. You can electrocute the commander by damaging the extension cord and turning on the power. It's even better to add poison to a bottle located in the building. This will make the Point Man use the toilet, where he can be eliminated silently (leave the body in the toilet or throw it out of the window and hide in the container). 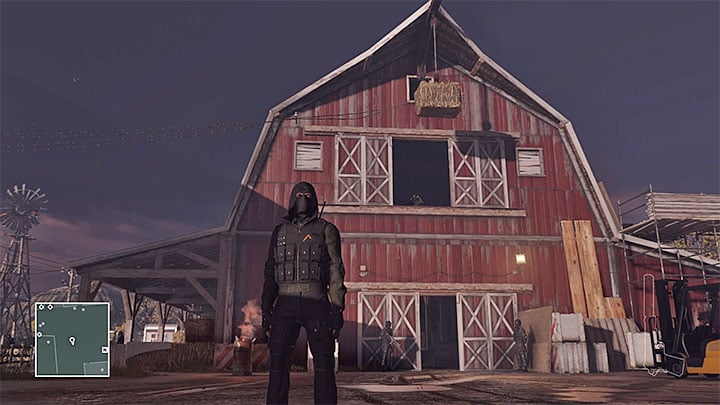 The Point Man has the same access as Militia Spec Ops, so apart from all the basic areas, he can access the large barn (M7.19) and the shooting range (M7.20). You will need this disguise if you want to eliminate Maya Parvati and contrive an accident with the ram (learn more about it by reading about possible ways to kill Maya). 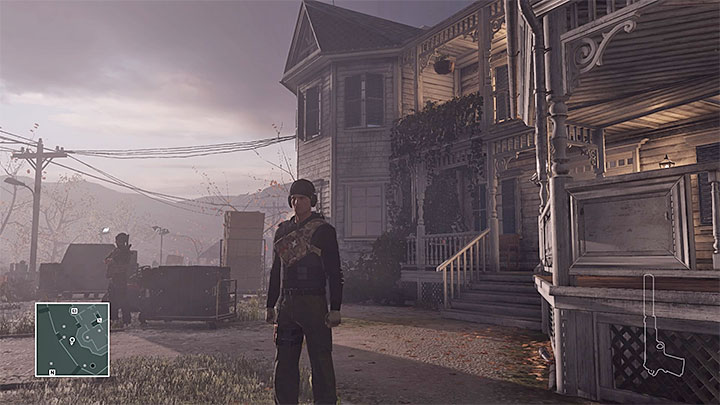 This uniform is used by enemies located near or inside the main building (M7.27). The easiest way to obtain it, is to take it from one of the enemies located by a small garage, east from the house (M7.15). Wait for the opponent to finish a conversation with his colleague, make sure that no one is watching Agent 47 and only then knockout the foe. There is a container nearby, where you can drop the body.

It's even better to obtain one of two additional uniforms. The first one is located by the house (M7.10) and it's not likely that you will raise the alarm while changing clothes. The second one is in a room on the ground floor of the building (M7.16). Unfortunately, there are enemies scattered around.

Elite Militia can access the main building, except Sean Rose's room and the basement. One also needs to take into account that certain enemies can recognize our hero even when in disguise. Apart from that you can access all the regular locations on the farm. 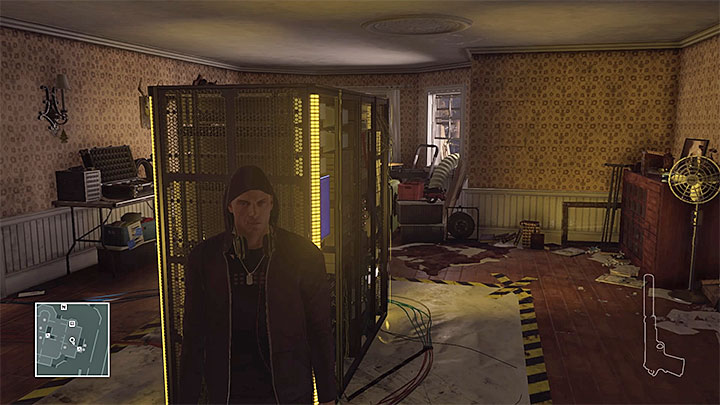 Hackers are located in the main building of the farm (M7.27) and may appear in its backyard from time to time. It's best to obtain this disguise from the server room, located on the ground floor (M7.33). If you sabotage one of the servers, a hacker should come to investigate it. A fallen body can be hidden e.g. behind large objects by the window.

Hackers and Elite Militia have the same access, which means that you can get into all the regular locations and the main house. Once again, you are not allowed to enter Sean's room and the basement. It's definitely a better disguise and the probability of being recognized is lower. In fact, all you need to do is watch out for a hacker on the floor (the one that moves between the 3D printer and hacker's phone). 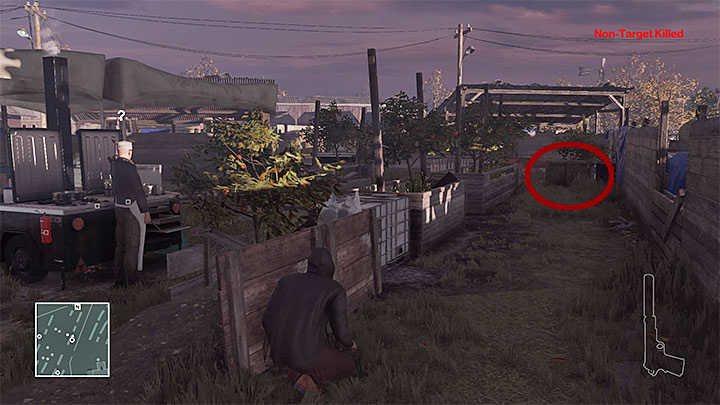 One of the unique uniforms as there is only one cook on the farm. He can be found by the cooker, in a large orchard, in the west part of the farm (M7.26). Obtaining the disguise and not raising the alarm is rather difficult, as the cook is located in a public place. Draw your attention to the container presented in the screenshot. Wait for a soldier to approach it, knock him out and hide the body inside. Then, throw an object to make the cook come closer. Once he gets close enough, take him out and hide his body. 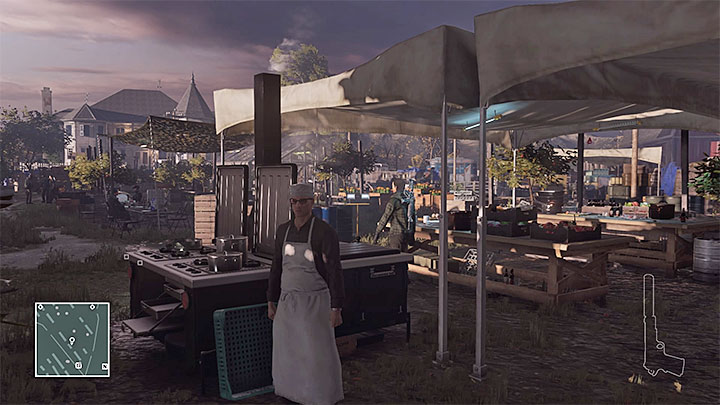 This disguise does not offer any additional benefits and just like in case of regular soldiers and technicians, a cook cannot enter unique locations (explosives zone, the barn, the shooting range or the main house). Your only advantage is that you can sabotage the cooker easily and make it explode when Penelope Graves is around. 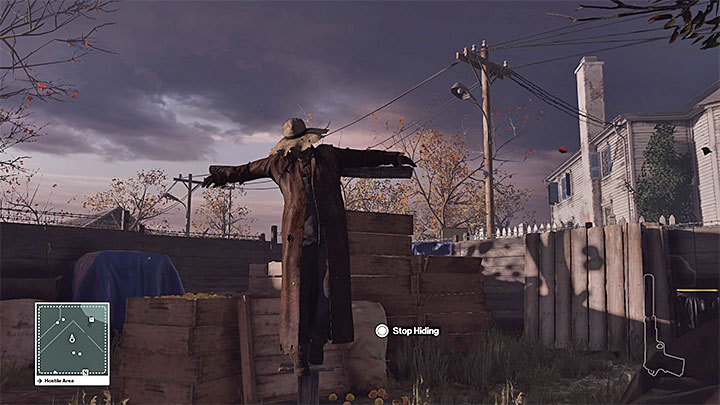 One of the unique types of disguise, as there is only one scarecrow on the farm. It can be found in the west part of the main orchard (M7.9). You can use this disguise only if the enemies are not looking for you.

This disguise provides no benefits and just as in case of your regular outfit, if the enemies spot you, you will be attacked immediately. It's worth mentioning that there are some hangers scattered across the farm where you can hide as a scarecrow. You can use this disguise to complete one of the mini challenges. Apart from that, it is required to complete the fifth level of escalation for this location.