Impersonating others has always been an essential element of gameplay in the Hitman series. Because of the fact that you can steal outfits from almost every male character in the game, infiltration gets easier, and so does losing oppressors, should Agent 47 get detected. This mechanism also works in the Bangkok mission, where you can use a variety of different outfits. Himmapan offers a full spectrum of disguises, starting from the ones typical of a hotel (hotel staff, security guard, waiter, or cook), all the way to unique ones, such as an exterminator, or a stalker. Note that in order to unlock the "Chameleon" challenge you must wear all these outfits. 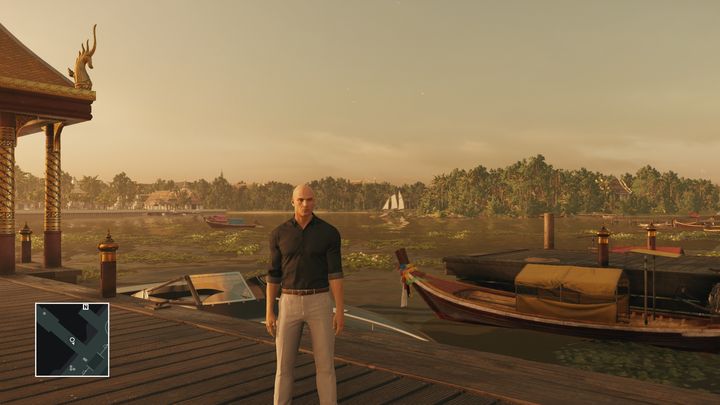 When wearing a suit Agent 47 is treated as a hotel guest.

Agent 47's basic outfit, which he is wearing on the outset of the Bangkok mission. An elegant suit is not practical for a hitman, though, because it makes him unwelcome in any area that is not permitted for hotel guests. Completing the mission objectives without changing suit unlocks the "Silent Assassin Suit Only" challenge. 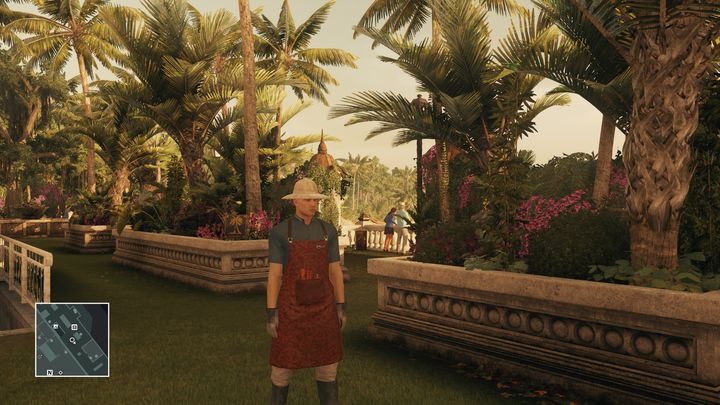 Here, behind the stone flowerbed, is the best spot to incapacitate a groundskeeper.

A not-so-bad idea, especially at the beginning of the mission, is taking clothes from a groundskeeper in the garden. First of all, this makes it possible to infiltrate the back of the hotel complex, starting from the storage place in the backyard. This outfit also lets you move freely on the first floor - only some guards and staff members can detect you (provided that you stay away from limited access areas). The groundskeeper can blend into the environment by holding a rake. 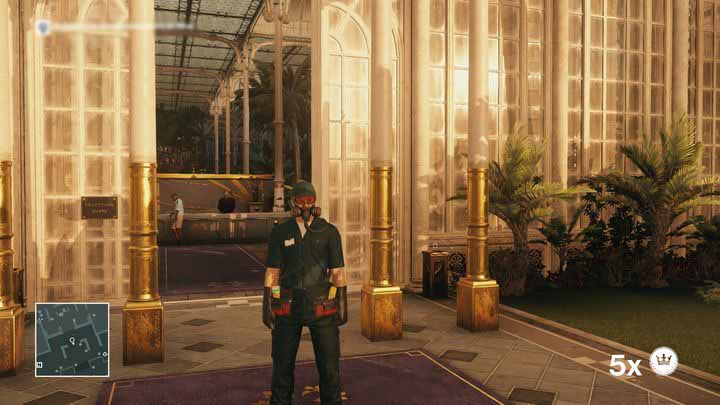 Putting this outfit on unlocks the "Exterminator" challenge. The easiest way to get that is by entering the room where a technician is checking on the ventilation system (M6,10). The bug killer walks around together with one of the Himmpan hotel's staff member, so you should be ready to quickly take down both of them. 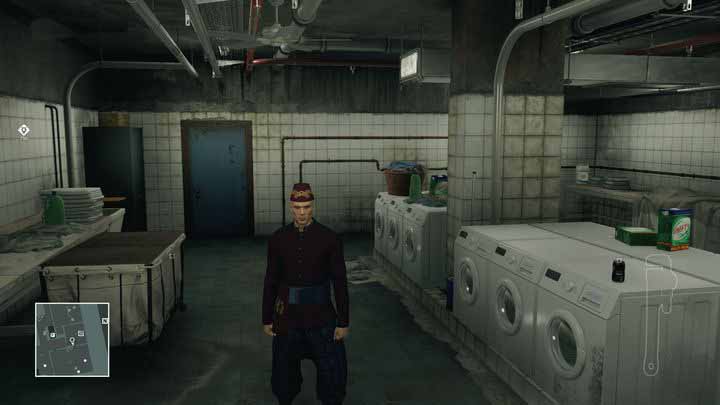 You can get a hotel staff outfit most easily by knocking out the three people in the laundry.

Disguising as hotel staff may seem the best cover for a hitman operating in a hotel. However, that isn't the case. A lot of people can expose Agent 47 in that outfit. It would have been completely useless if not for the fact that it is necessary for unlocking all five Himmapan Horror challenge missions as well as for completing one way of killing Ken Morgan. 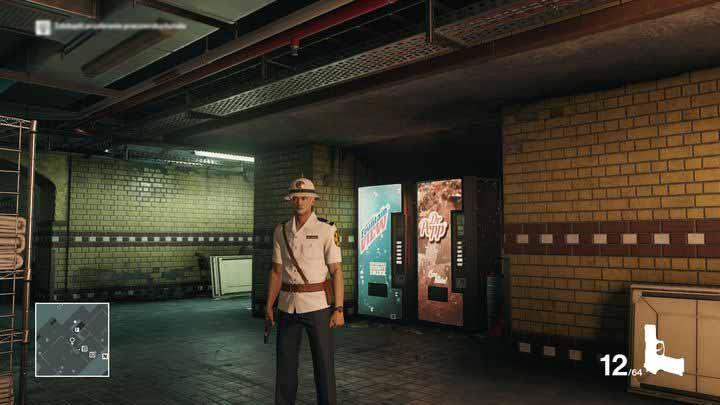 This is where - by the two vending machines - a careless security guard is posted.

Getting an outfit of a hotel security guard is not a tough one - the best place for this is the security office on level 2 or the underground corridor on level 0. One of the guards posted there (M6,1) leaves his post from time to time in order to make a phone call. This outfit doesn't unlock any challenges, but not many people can see through it - mostly other guards and hotel staff on level 1. 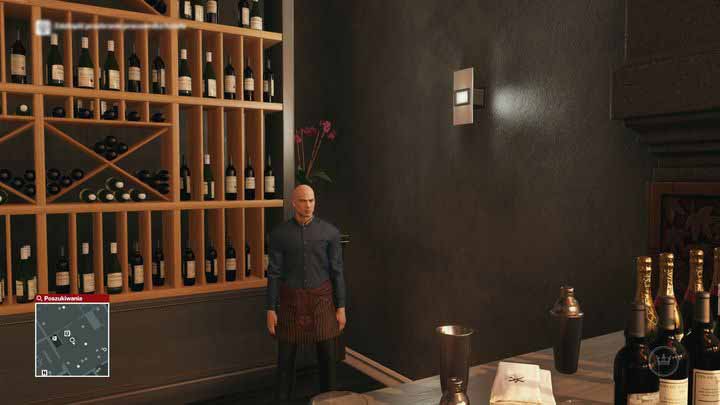 A waiter can blend into environment mostly by the bar, which he can start wiping out with a rag.

The waiter's outfit doesn't give Agent 47 access to any guarded areas. This, however, lets him blend into environment by the bars. When dressed as a waiter, the protagonist can also poison food at a bar without raising suspicions. The best place to get it is behind the wet bar with wines on the first floor, where a real waiter comes to check on the supply (you should watch out for staff workers coming in or out of the kitchen), on the back of the bar near the port (the waiter frequently talks on the phone there), or from the locker in the hotel staff changing room (M6,2). 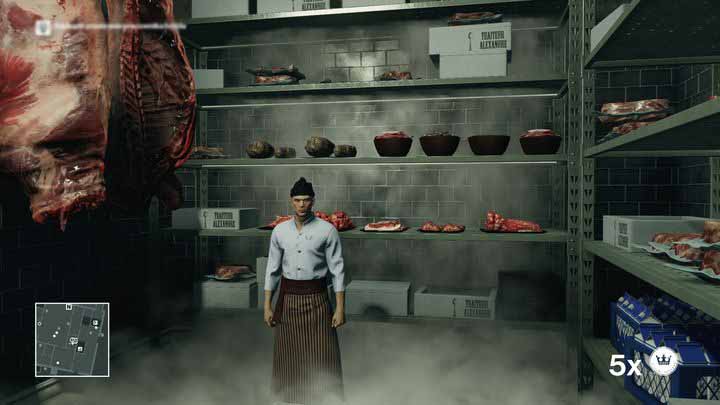 Unfortunately, the icehouse is not where you can kill Jordan Cross or Ken Morgan.

Disguising as a kitchen staff member lets you poison food anywhere you like as well as steal the topper from Jordan Cross's cake. This outfit can be acquired most easily from the icehouse (M6,11) - you should use coins to lure one of the cooks who are doing inventory inside. 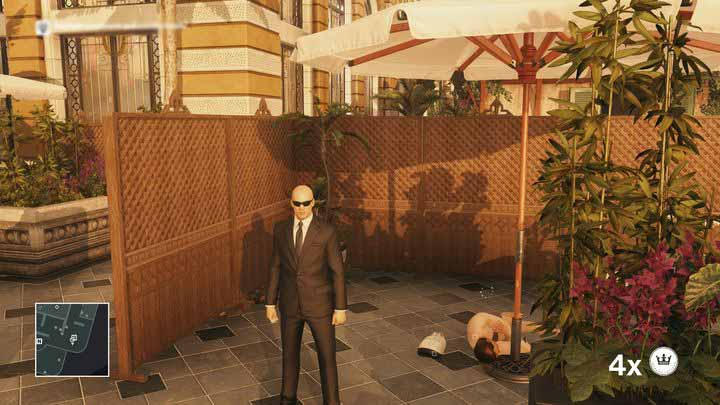 Morgan's bodyguard's disguise is only useful on level 1.

Disguising as Morgan's bodyguard named Otis only works on level 1 - even here the player can be exposed by a hotel staff member at the reception desk and by Morgan himself. In order to get that outfit you should wait until Morgan and the bodyguard quit talking on the terrace (M6,6). Morgan will walk toward the reception, while the bodyguard will drink water from a bottle - this is when you should distract him with a coin and lure him behind a folding screen. Knock him out then and take his clothes. 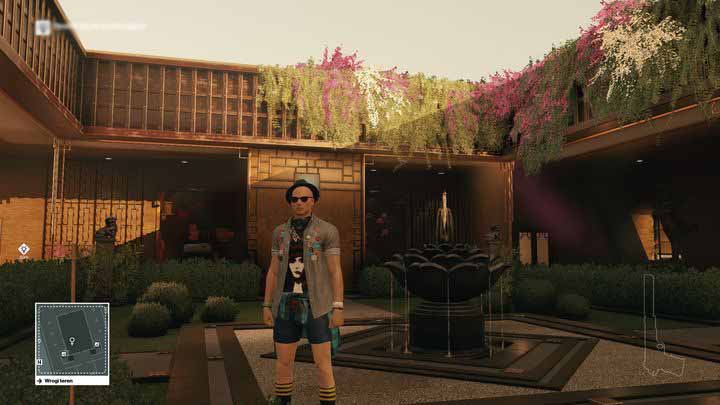 The most useless outfit, because it won't fool anyone.

The most useless of all outfits (M6,3) that you can find in Bangkok. For Agent 47 wearing a stalker's outfit means that every level and room is marked as a hostile area. You can get it on level 5 - in the hotel wing with the Queen's Suite. 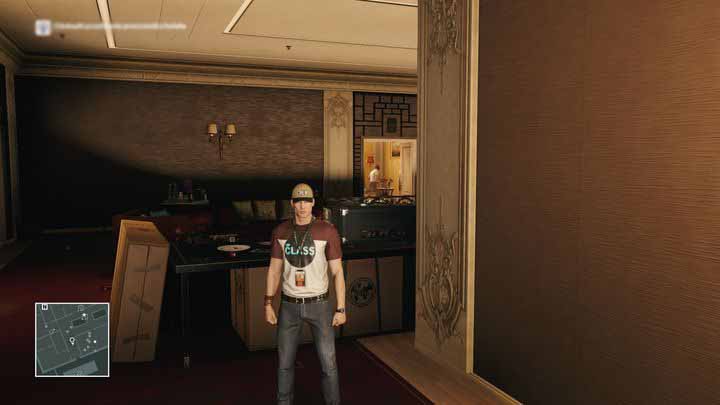 The Class crew outfit will get you in many places.

A recording crew disguise can be acquired rather easily - in room 202's bedroom (M6,19) you will find a man wearing this outfit. The best way to get into that room is by climbing up the gutter from the room 102 (M6,20). However, a couple of the crew members may notice that something is wrong, so stay alert while using this disguise. You can blend into environment when using a bottle of beer or leaning against the balcony railing. You can also find this outfit in the room 207 - the clothes (M6,4) are lying by the bathtub - but you will need a magnetic card for that. 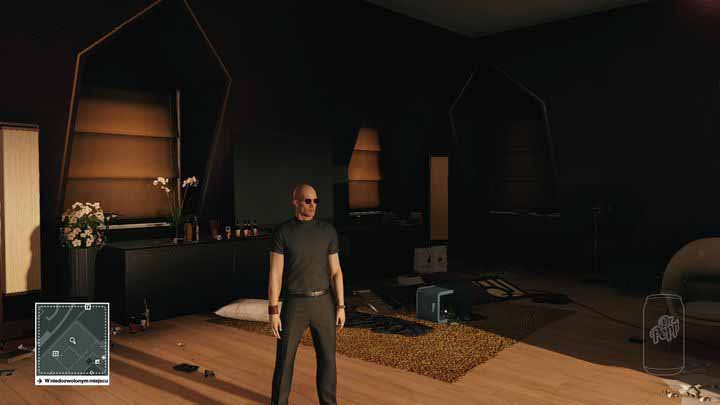 Cross's bodyguard can be lured inside the musician's dark room.

Jordan Cross has a dozen or so of bodyguards - one of them can be knocked out on the fifth floor, while he is leaning against a stair railing (M6,5) (you should wait until his partner leaves). While he is wearing this disguise only a couple of men from Cross's crew can expose Agent 47, so this is worth getting. 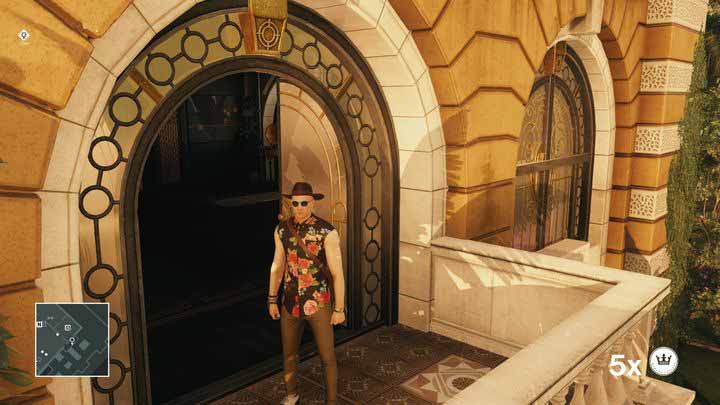 You should entice the drummer to leave the balcony and come into the room, where there are no witnesses around.

Abel de Silva is a drummer hired by Jordan Cross's band, The Class. This disguise unlocks "The Replacement" challenge and lets you eliminate Cross using the "Man Machine" opportunity. The easiest way to eliminate Silva is when he goes out on the balcony, because while in the corridor the musician is being watched by a guard. You should then use a coin to lure him into another room with no witnesses around, and once there kill or stun him - whichever you prefer (M6,14).