It's good to obtain the disguise of elite soldier, no matter which way of eliminating Reza Zaydan will you choose. This outfit will allow you to enter the former educational building without raising suspicion or alarm (but with unlocking the Achievement "New Transfer"). You can approach the school from three directions - from the carpet store, from the well or with one of the streets leading there directly from the market.

Murdering as the prisoner 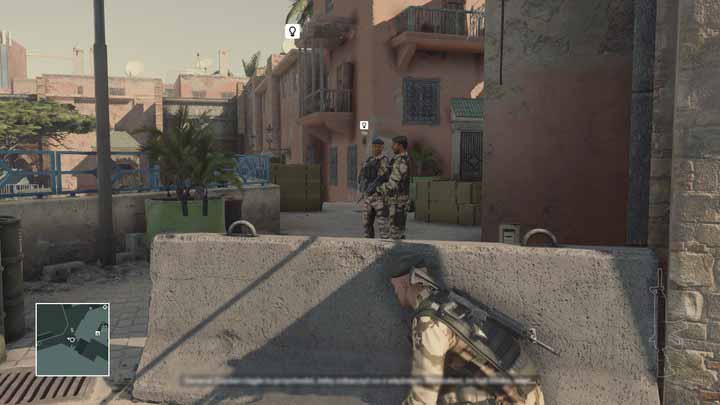 Two soldiers are talking about Zaydan's prisoner - it's a new opportunity to eliminate him.

The first opportunity to assassinate general Zaydan will appear right after passing soldiers watching the way from the carpet store. After passing a stone arc you will be able to overhear a conversation of two servicemen. It informs you that there is a prisoner held in the garrison (M5,6) - Reza's former friend who turned his back on Zaydan after a bloody attempt to rescue Strandberg which ended with death of his brother who served in a local police. The prisoner decided to expose the conspiracy but Reza's soldiers managed to capture him earlier - now he is awaiting a death sentence in his cell. 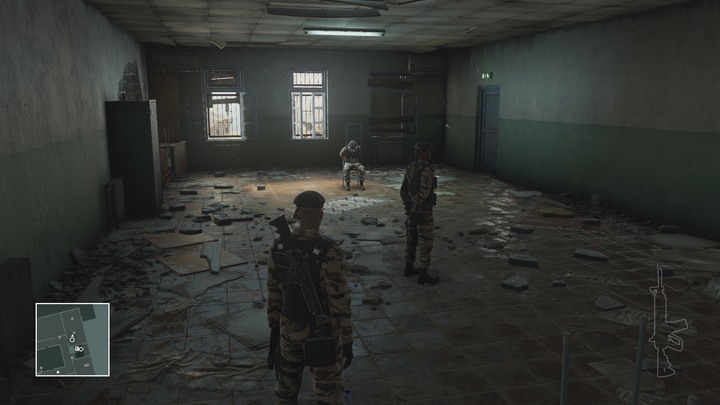 This method requires you to put on clothes of the guarded prisoner.

You won't have any problems with finding the cell. Following the main corridor you will reach the schoolyard - then turn left. After a while - when you get to the barricaded stairs - turn right. Prisoner's cell is at the end of the corridor, watched by one of the soldiers. While your presence in the room will be tolerated (in elite soldier's disguise, of course), any attempt to get close to the captive will end in raising suspicion and alarming the entire staff. 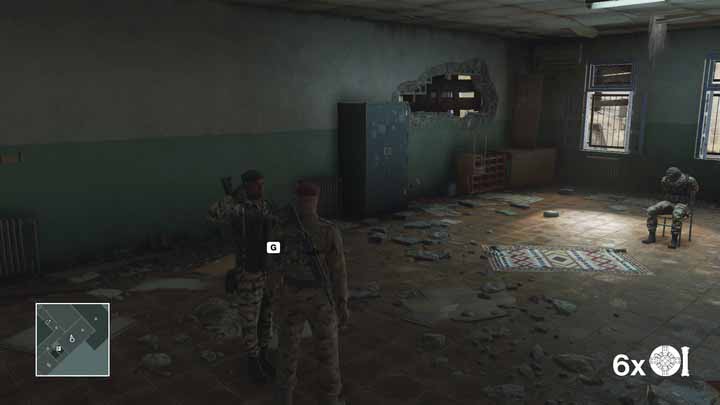 Soldiers will salute to the officer - you can dismiss them.

The only solution is to get outfit of the officer which gives you the ability to send away the soldier watching the prisoner. It's best to get it on the ground floor, in the staff room on the other side of the schoolyard - next to the weapon storeroom. You need to wait until one of the soldiers stands by the window while the officer (M5,7) turns his back in the corner. Then you can get rid of the serviceman looking outside and then get the officer. 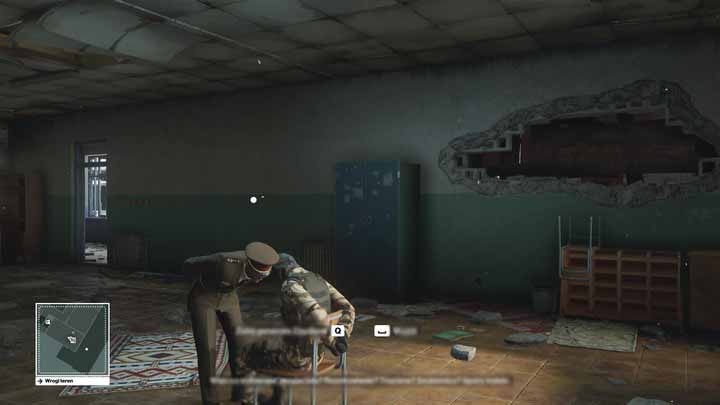 You will eliminate a surprised Zaydan while sitting on the chair.

After performing this action (which requires very good timing if you want to remain unspotted) go back to the cell and dismiss the guard. Now you only need to approach the captive from behind, stun (or kill) him, take his clothes, hide the body in the closet and wait for the general to come. However, remember that you can't have any visible weapon on your back - throw away rifles, otherwise you won't be able to sit on the prisoner's chair. This way of assassinating Zaydan is rewarded with the Achievement "Bad Blood".

Murdering as the printing crew member 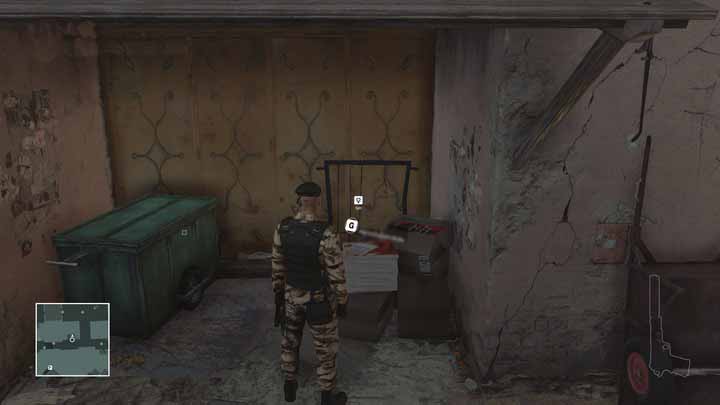 It's easy to miss the printing schedule - it can be found by one of the school's entrances.

An Opportunity to perform this assassination becomes available after you meet the propaganda printing crew which uses disguises of terrorists called Crystal Dawn while hanging out posters calling out citizens to fight the government. You will find them if you turn right after exiting the shisha café and then stick to right (eastern) border of the map. You can also find out about the propaganda from the printing schedule (M5,12) which is placed near the middle entrance to the school. 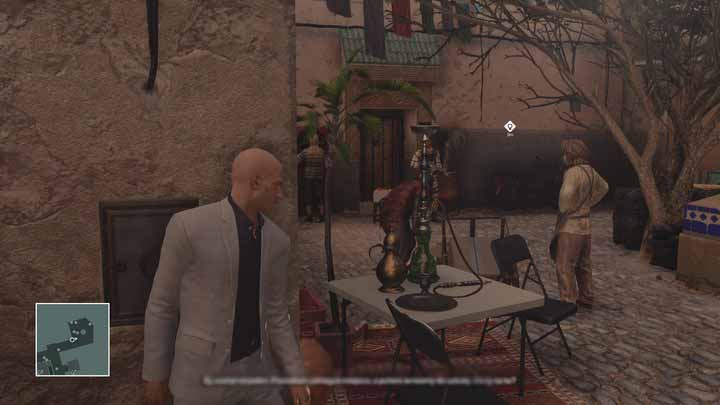 A frontal assault is impossible - an elite soldier is watching the printing crew members.

Now you have to obtain the outfit of the printery worker. To achieve this goal you should follow a crew member heading to the market (M5,1) - the road he will lead you on is twisted and densely populated so you have to go after him patiently. The best place to incapacitate the printing crew member is a small warehouse - however, you need to do it quickly, as there are people walking down the street who can notice your suspicious behaviour. 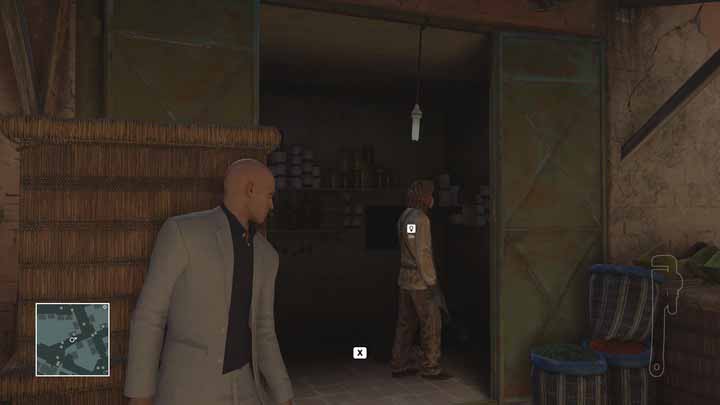 Elimination must be quick - there are tourists on the street who may raise an alarm.

After taking care of the printery worker you need to go back to the crew in his outfit and talk to them - your "co-workers" will decide that they should head back to the printery set in the school. Guards will stop the entire group on the way but they won't search you - so you can keep a silenced pistol or other recognizable items. 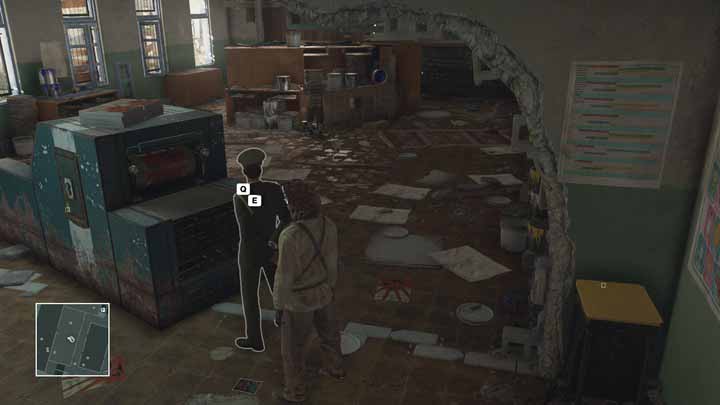 Zaydan has to stand next to the printing press - then you can kill him.

There will be Reza on the spot, giving orders to printing crew members. All you can do is to blend into the crowd of workers and wait until the general comes back to the printery. When he will be nearby, turn off the printing press (M5,17). It will cause Zaydan to get mad and come close to run the machine - that's when you can push him on the press. Assassinating the general in this way will grant you the Achievement "Don't Use That Tone".

Murdering with the toilet

The school which Reza Zaydan has fortified is in ruin - collapsed walls, holes in ceilings and rubble piled everywhere. I guess no one would be surprised if a toilet fell on general's head from bathroom on the upper floor. Unfortunately, such interesting spot isn't on Reza's regular route so you need to provoke him to go there. 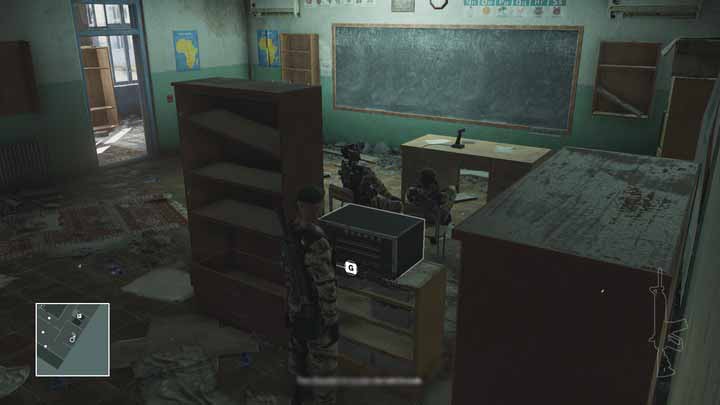 Gossipers are backbiting Zaydan - you can use it to provoke him.

There is a room with the school intercom, right under the ruined bathroom on the first floor (M5,13). Unaware of that fact, soldiers decided to exchange there negative opinions about the general. You can use it to lure Reza under the toilet which stands dangerously close to the hole in the floor. 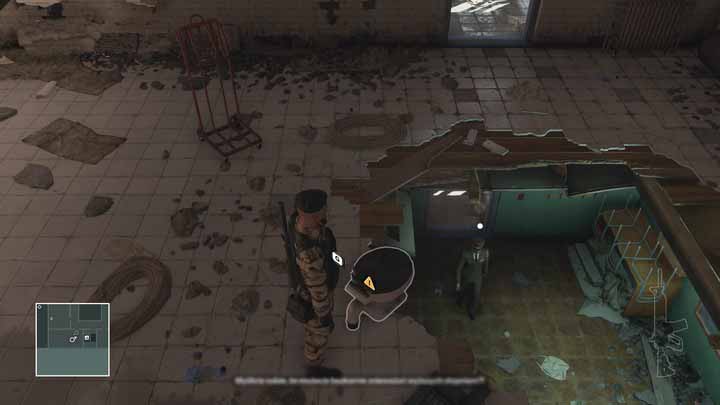 Just one moment and the toilet will land on general's head.

All you need to do is to turn on the intercom behind talking soldiers and approach the bright boxes stashed in adjacent room. Hearing gossips regarding him, Reza will go towards the bathroom, but after noticing the gossipers he will come downstairs to reprimand soldiers. That's the moment when you can use the boxes to climb directly to the bathroom. Push the interaction button by the toilet (M5,18) when Zaydan reaches it's "range" (he must be closer than at the doorstep). This way of assassinating the general will unlock the Achievement "Bathroom Break" and won't raise suspicion of other soldiers - it will remain undetected.

Other ways to assassinate Reza Zaydan

Pushing out of a window 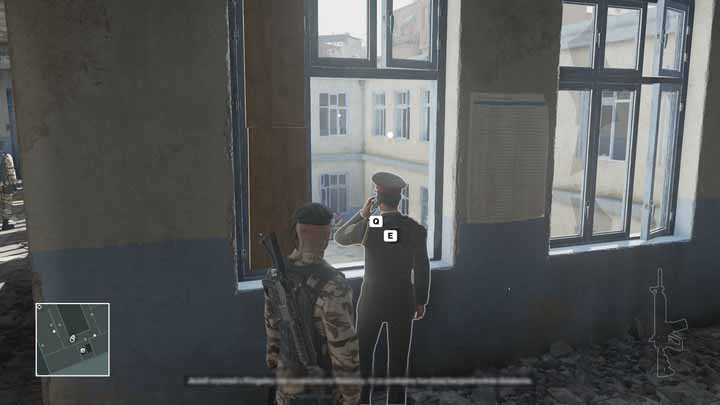 It's a very loud method to kill the target - it will raise an alarm immediately.

You have chance to do it a couple of times, when Reza is walking around the first floor of the school and speaking on the phone. He will be stopping by some windows - e.g. in his office - giving you an opportunity to push him. However, it's the loudest way to kill Zaydan as the noise of falling body will attract attention of soldiers and may end in raising an alarm. 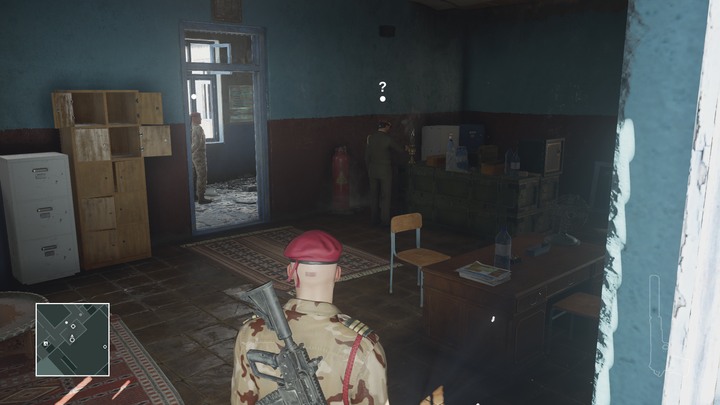 In one moment Zaydan will die in an unfortunate accident.

It isn't difficult way to murder the general and it will be noted as an accident. All you need to do is to sneak into Zaydan's office and extinguish the oil lamp on the desk (M5,19). Then unseal the gas bottle. After coming to the office the general will light the lamp again - causing immediate reaction between the fire and the gas from the bottle. Just remember to unseal the bottle after taking care of the oil lamp - otherwise you will hurt yourself with your own trap.

Strangling with the fiber wire

It's not very sophisticated way but it's worth completing mission using it as it rewards you with the Achievement "Piano Man". You can also try to assassinate Zaydan disguised as the headmaster - it will unlock additional Achievement, "The Headmaster's Revenge". 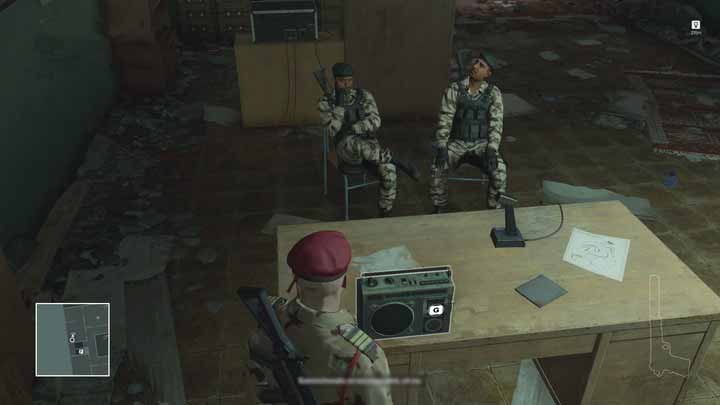 There is a common bug related to the radio - restart the mission if you don't see this object here.

I think it's the most heartfelt way to take general's life. Disguised as the officer, you have to dismiss all soldiers on patrol on corridors of the school. When you do that go to the room where the gossiping soldiers are sitting. This time turn on not only the intercom (M5,13) but also the radio (M5,14) which is on the desk, next to intercom's microphone. It will cause the school walls to fill with an oriental music. Now walk to the yard behind the printery - all soldiers you dismissed gathered there and general's coming is only a matter of time. All have good time dancing to the music that you turned on - so you now can, without any problems, put a bullet in Reza's head from the other end of the yard. It will grant you the Achievements "Dance 'Till You Drop" and "Straight Shot" (this one only if you deliver a headshot). 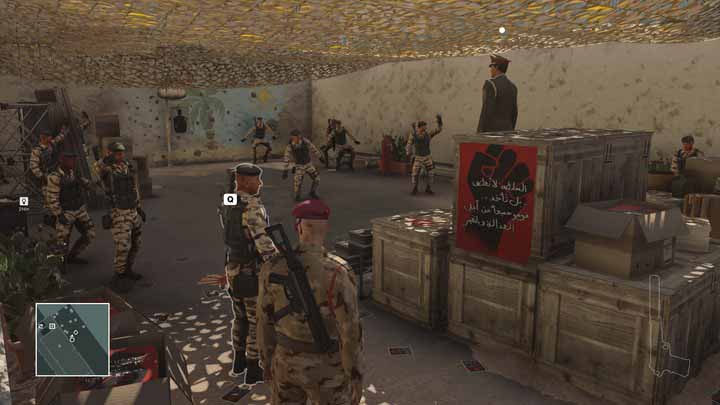 Now you need only to shoot general Zaydan - you should do it from a safe distance.

NOTE - there is a bug related to the radio which often cause that it can't be seen or used. If you can't find the radio on the desk, don't panic - try to walk around the school and send more soldiers to the yard. If the bug is still causing problems, restart the level. 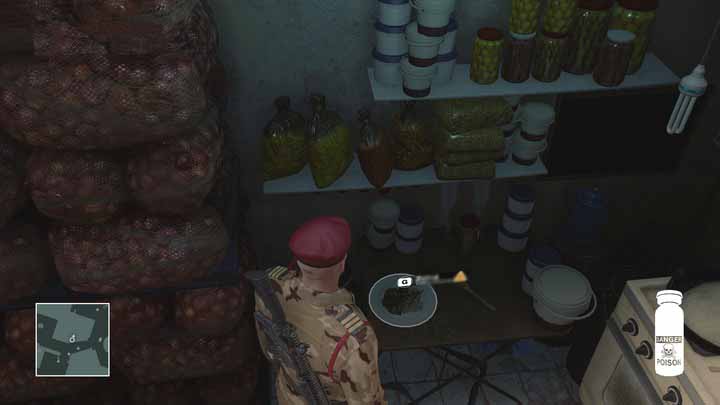 It's hard to find the plate with Zaydan's meal - it's in this place.

Contrary to what it may seem like, it's not an easy task. In the first place you need to get the jar of lethal poison pills (M5,9) - it's in the Zaydan's office which you can infiltrate most easily when disguised as the officer. After getting pills walk down the street towards the market and poison the food on plate (M5,20) which you can find in a roadside kitchen. 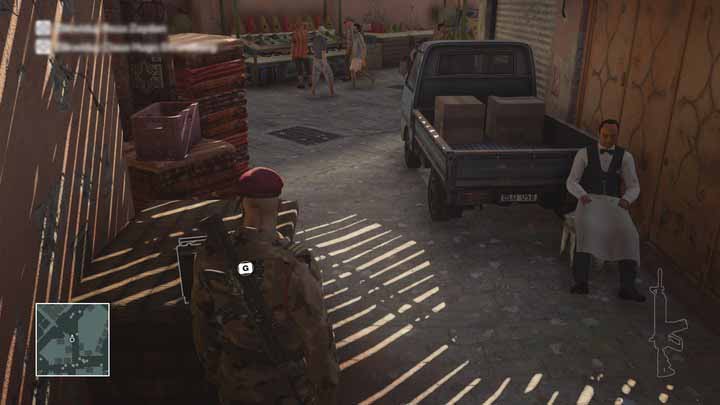 You will wake up the waiter by turning on the radio - then he will go with the plate to Reza.

If the meal is already poisoned you should go back to the door leading to shisha café's break room - there is a waiter sleeping nearby (M5,21). To wake him up you need to turn on the radio placed next to him. After coming to his senses the waiter will turn off the radio and go for the plate. You don't need to follow the waiter - he will deliver the poison in the food to Zaydan's table and the general will die after few chunks. This method of assassinating Zaydan allows you to unlock Achievements "Poison IV" and "Tasteless, Traceless".