Claus Hugo Strandberg is a private banker who stole billions of dollars from Moroccans' accounts - he's also involved in the conspiracy meant to overthrow the weak government of Morocco. It's easiest to walk around the consulate - building where Strandberg hid from the angry mob - disguised as the masseur or cameraman (you are hard to be recognized in both outfits).

Murder as the masseur

You will find out about this way of killing target from the tablet (M5,9) which is by the front desk. In order to kill Claus Hugo Strandberg you need first to get the outfit of Konny Engström - a masseur with "golden hands" (M5,6). He can be found in the conference room - but he is watched by a security guard and a consulate employee who is regularly coming in and out from the room. You can kill all three of them by using silencer but triple murder of civilians will have large impact on the overall mission score. 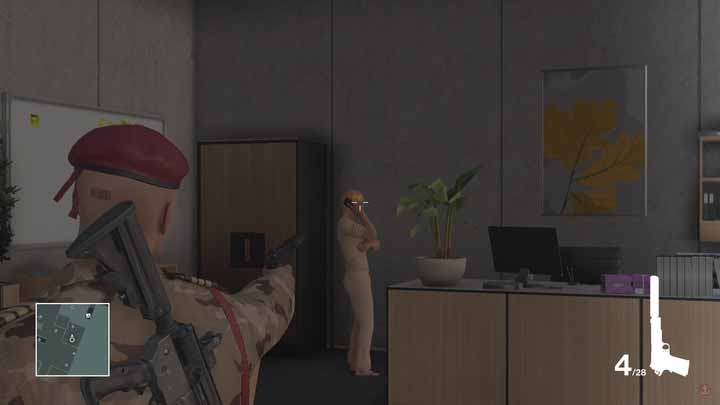 These must be quick shots - there will be also a guard and consulate employee to eliminate.

So, you should solve this problem differently. The masseur is talking by the phone and he isn't going to stop - so you need to force ending the call. Turning on the TV (M5,10) is a good idea. Annoyed with the noise, the masseur will exit the room. You can get him in the kitchen on the opposite side of corridor - just wait until all security guards leave the room. 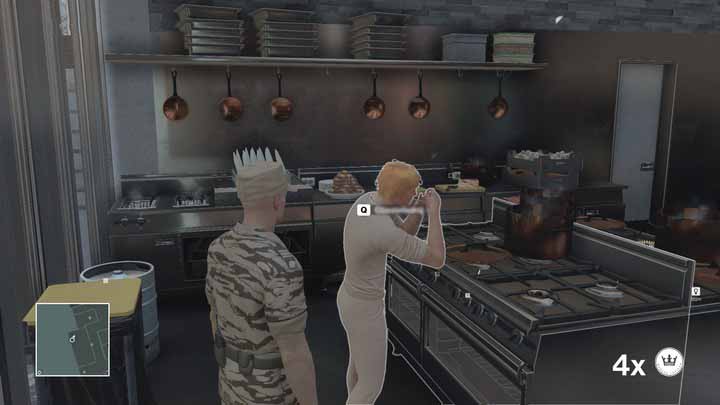 You must be careful while eliminating the masseur in the kitchen so that no one spots you.

Disguised as the masseur, go the front desk - secretary (M5,10) will inform you that Strandberg is already waiting for you arrival. So you have to go to the massage room. While climbing upstairs you will be searched - remember to get rid of any detectable weapons. You can also get on the upper floor with the backstairs, where no one will check Agent 47's pockets. 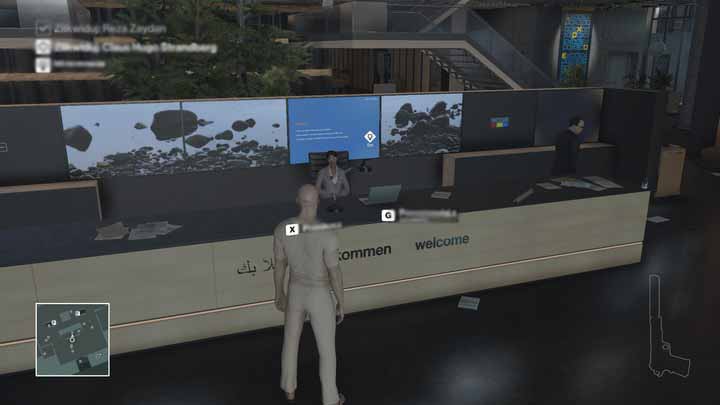 You need to speak with the secretary in masseur's clothes. 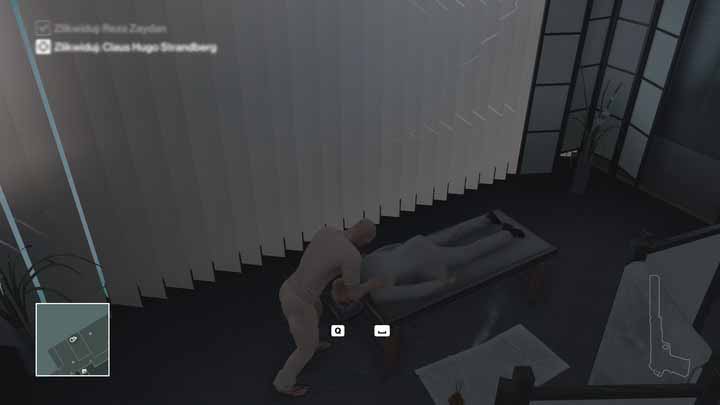 Watch not to miss the opportunity to snap Strandberg's neck!

Murdering as the cameraman

While walking down the main passage between the market and the square with protesters you can overhear a conversation of members of the GNN TV crew (M5,11). They are supposed to have an exclusive interview with Strandberg but they don't have a camera operator who is suffering an infectious diarrhea. That's your chance to enter the protected consulate and kill Claus, yet first you need to obtain the cameraman's clothes. 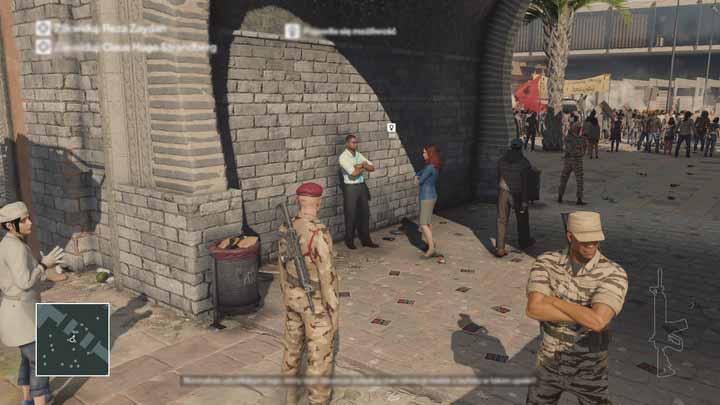 The first cameraman has got a stomach flu - who will replace him?

The cameraman (M5,5) is sitting in the local shisha café. According to his phone conversation, he cheated his employers from GNN and he just isn't going to take part in recording the interview with Strandberg. After a while he is entering the shisha café but the entrance is blocked by a guard - a pass is required. 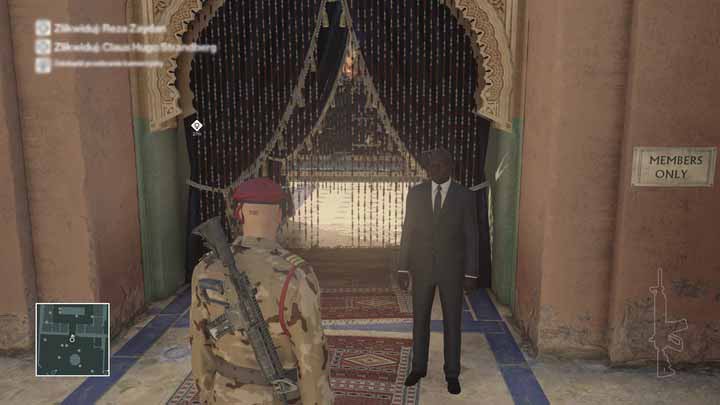 You won't enter the cafe without a proper pass.

You can get inside using three methods:

The first option is to cut off power from the fan (M5,4) behind the bar. Annoyed waiter will go to check why the device has stopped working. Now you need to take the key from the counter (M5,1) and walk to the door leading to café's break room. You will get the Courtyard Club membership card inside (M5,6). You can show it to the guard... or run the ice cube maker (M5,5) and therefore get a chance to obtain waiter's disguise which allows you to walk freely around the entire shisha café. 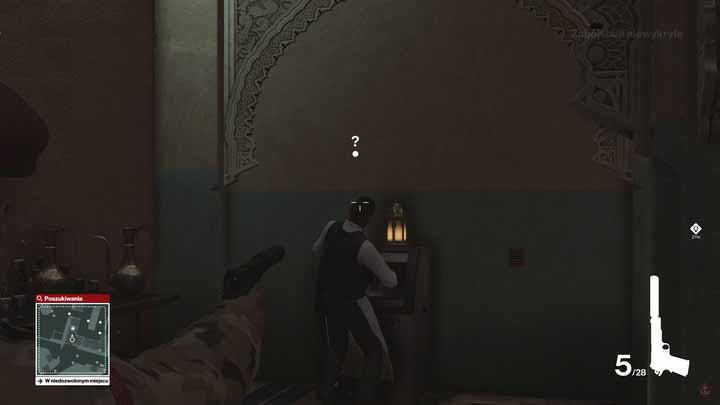 The third option is to get inside from the rooftops. From the spot where the former chief of consulate security can be found (M5,8) you can jump on the roof hung over the street. You can reach a drainpipe there - and use it to slide straight into café's bathroom. Here you need only to incapacitate the soldier and take his membership card (and his outfit if you don't have one already).

When you are inside, getting the cameraman disguise is easy but it requires calm. First you need to take out one of the soldiers who is regularly visiting the bathroom - so it's best to wait for him there (e.g. right after you've entered the café by sliding down the pipe) - as he will make stunning the cameraman impossible. You can knock down the operator (M5,5) when he is washing hands by the sink - without the soldier watching this part of the café there will be no other witnesses. Just remember about hiding the body in a container in the toilet.

Right after putting on the cameraman's clothes you will unlock the Achievement "Candid Camera". Now go back to the TV crew (M5,11) and inform them that you are ready for the interview. You will go together to the consulate and after reaching the front desk the secretary (M5,10) will take you to the provisional studio. However, you should walk away from your guide and descend to the underground level (if you have the magnetic card which allows you to open doors in the consulate). There, on weapon boxes stashed behind the huge armoured carrier, you will find remote explosives, which will prove useful in eliminating Strandberg. 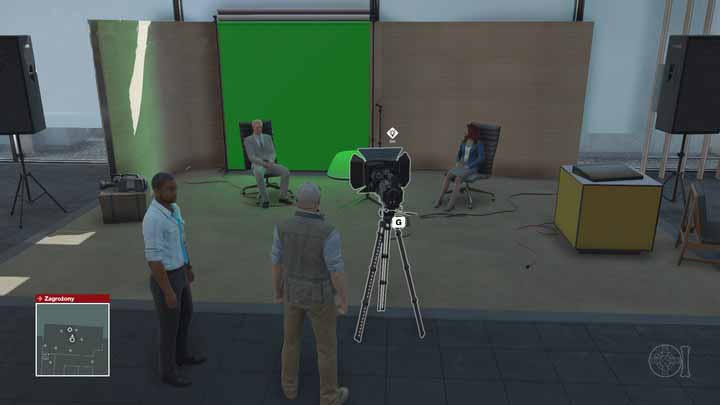 After turning on the camera the target should be neutralized with an explosion.

After getting the explosives in the underground car park go back to the studio (M5,12) where the crew will meet Strandberg. In this moment you can walk to the camera (M5,13) by the greenbox and arm it with the remote charges. After a while Claus will sit in front of the greenscreen and your task will be to turn on the camera on tripod (it unlocks the Achievement "Prime Time"). Now you only need to detonate the charges hidden in the hand camera - it will grant you another Achievement, "Drama Queen".

Murdering with... a moose 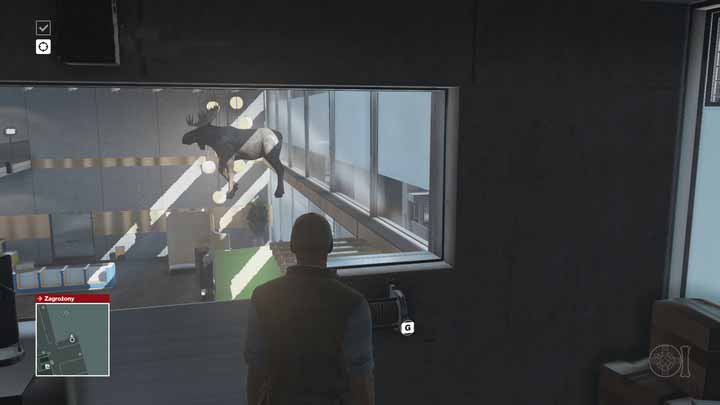 Just release the crank and a giant moose will fall on Strandberg.

It is possible to murder Claus Hugo Strandberg with a moose - no matter how silly it may sound. Proceeding with the interview looks the same as before until you turn on the camera - after that you should go to the first floor of the building. In control room above the provisional studio you can set lights but the most important thing is the crank which is responsible for controlling the moose (M5,14) hung from the ceiling. Just press the action button and watch Strandberg dying in hilarious way and the game unlocking the Achievement "A Room With a Moose" for you.

Strangling with the fiber wire

Taking Strandberg's life with the fiber wire is the simplest challenge. However, you can try to do it dressed as the intern which makes things much more difficult - and unlocks the Achievement "Internal Affairs". In such case it's best to assassinate the Claus in his office. 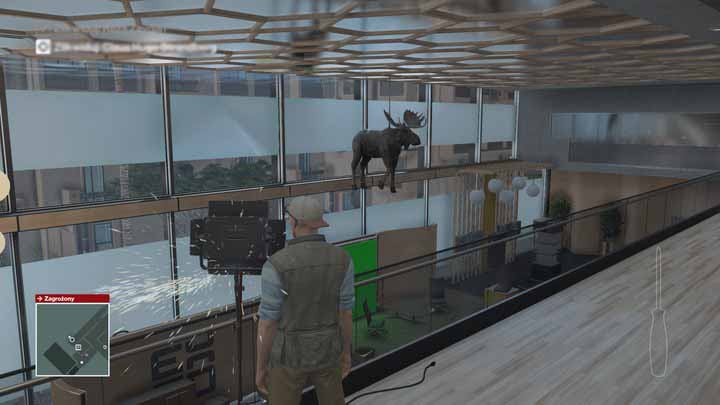 Damaging the lamp allows you to kill Strandberg with the electricity.

Get the screwdriver at the beginning, e.g. in the warehouse (M5,2). After it is added to your equipment, go to the first floor in the consulate - you can use the screwdriver there to damage the scenic lamp (M5,16). Right after the reflector is broken go to the control room and wait until Strandberg walks on the balcony. When he lean on the barrier (which is a great conductor), turn on the lamp (M5,15) and therefore assassinate Strandberg by electrocuting him.