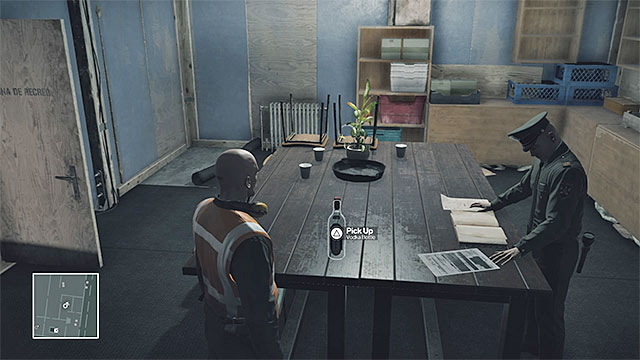 Vodka can be found on the table on level 0

This option of killing Jasper Knight requires some preparations. First you must obtain the Emetic Rat Poison. It can be found for example in two different places of floor 0 of the building (M2,2) - west from the hangar and in southern part of the building, near the toilet entrance. The next step is acquiring the Vodka Bottle. It is lying on a table in one of the southern rooms on floor 0 (M2,2). Since the security guard is standing nearby, use Soviet soldier or mechanic disguise. 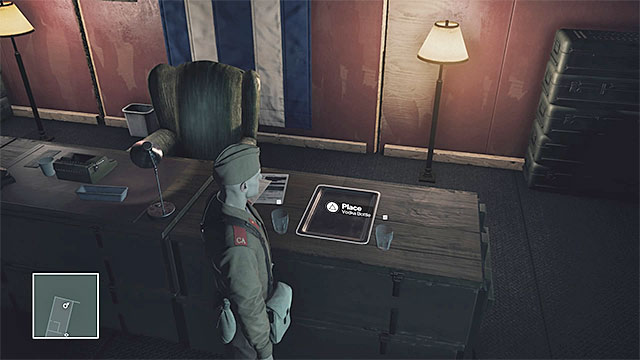 Once you acquire both the poison and vodka, go towards the office of KGB officer that is located on level 1 of the building (M2,3). You can easily enter the office if you have the Soviet soldier disguise. If not, you can climb up the gutter and enter through the window. Before you do anything, wait until both KGB officer and Jasper Knight leave the room. Place the vodka bottle on the table shown on the above screen and then add the poison to the left glass. Thanks to that in a few moments the mission target will become poisoned.

Important - If you use the poison on both glasses, then nothing bad will happen. The general and Knight will go to two different toilets and you will still be able to perform the assassination. 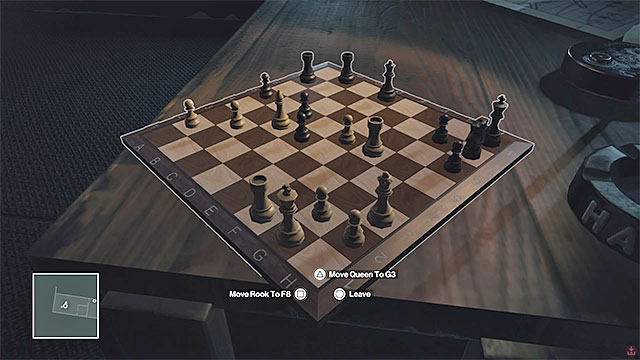 Remain in the office and walk towards the chess game. Interact with it and change the position of any chess figure. This action will disorient Knight when during the next opportunity he will check the position of the figures. 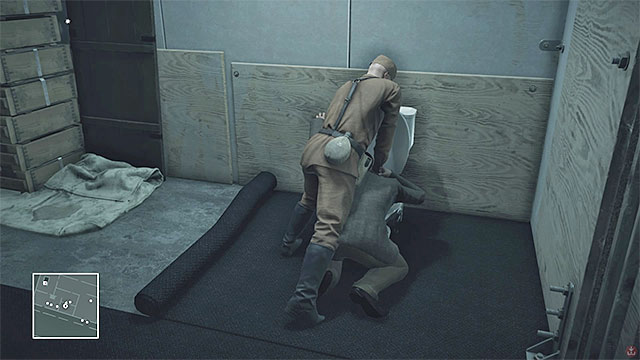 Now you must wait for KGB officer and Jasper Knight to get to the office. The mission objective will check the chess game and then agree to drink vodka with the officer. Once Knight is poisoned, he will go towards the toilet on floor 0 of the building (M2,4). You can either follow him or reach the toilet earlier and hide in the closet. Start acting once Jasper Knight will lean above the toilet - you can for example use the garrote or drown him in the toilet. Once Knight is dead, hide his body in the closet.

Important - Don't stun the KGB officer before the poisoning as Knight can drink vodka only with him. If the officer was eliminated, then the meeting will not happen. 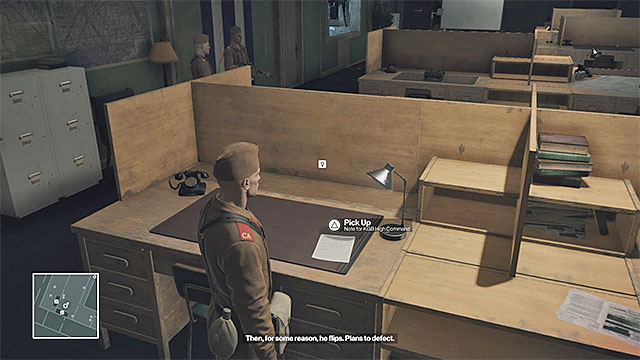 The note is lying on one of the desks

This option focuses on making it possible to kill Knight privately. Start with reaching the large southern room on level 1. Find the note from KGB High Command (M2,4) on one of the desks. From it you will learn that Knight is blackmailing KGB and that he is waiting for a response from Moscow. 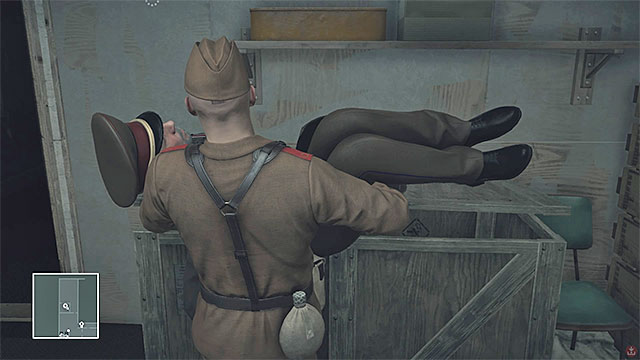 The next step is taking the identity of KGB officer who can be found at the airport. Similarly as Knight, he is walking through the level 1 of the main building. It is best to wait for the officer in his office (M2,3) and use for example the garrote to take his life. However, do it only if Knight isn't in the office at the moment. Additionally, just after killing the KGB officer you should move his corpse to the bathroom and hide it there. Then put on the KGB Officer Disguise. 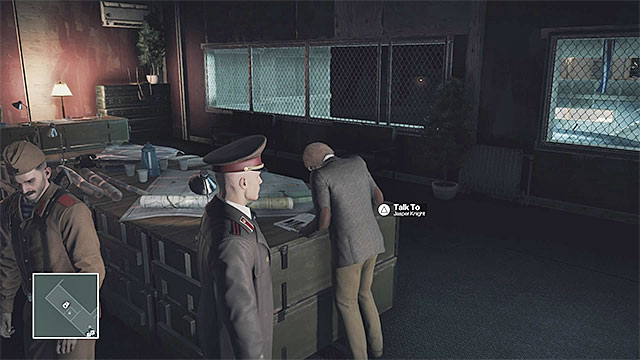 Now find Jasper Knight and speak with him in order to encourage him to go with you to the radio room. It is located in the eastern part of level 1 of the building (M2,7). No one will stop you or recognize you on the way there. 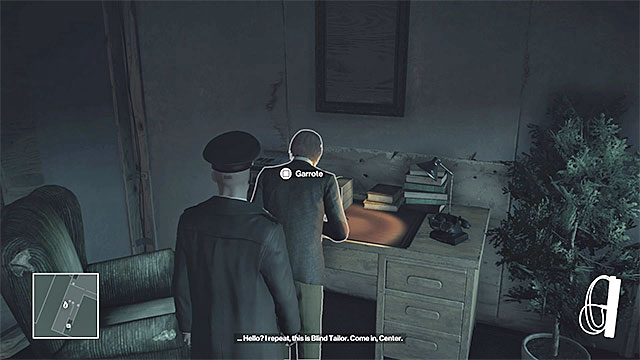 Kill Knight when he will use the radio

Once you reach the radio room, Knight should walk towards the radio. Once that happens, use garrote on him or break his neck. Start moving his corpse towards the corpse. Watch out for the guard that is patrolling the nearby balcony - thanks to the glass wall he can see what is happening inside. Wait for him to walk south and then move the corpse. 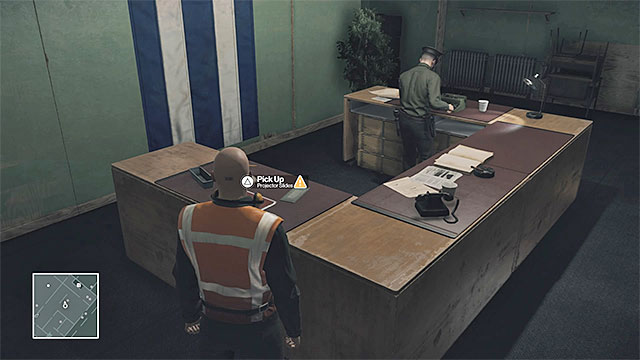 Slides are in the reception

In this option you use the projector to kill Jasper Knight with electricity. You must start in the reception on floor 0 of the building. There you will find Projector Slides (M2,5) that contain the escape plan. Few security guards are located in the reception, but the plans can be easily obtained by using the Soviet soldier or mechanic disguise. 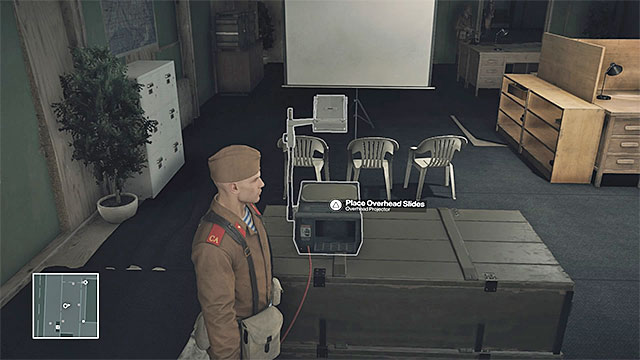 Place the slides in the projector

Go with the plans to the floor 1 and find the projector (M2,6). Put the slides inside the projector and they will be automatically displayed on the screen. 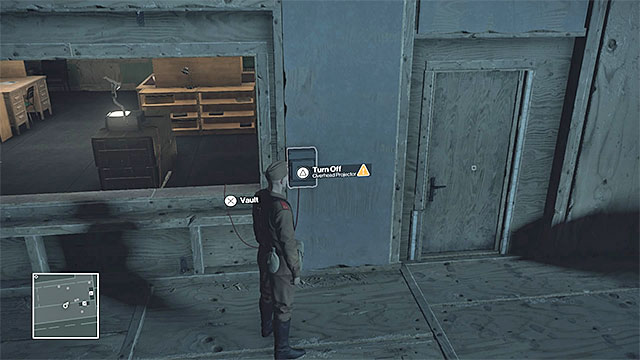 Now you must wait for Jasper Knight to become interested in the slides. Once he starts looking at them, go to the outside balcony (preferably while disguised as Soviet soldier) and sabotage the fuse box shown on the screen. This will turn the projector off.

Important - Don't worry if you fail to reach the fuse box in time or if you miss the time when Knight will walk towards the projector - he will return to it regularly. 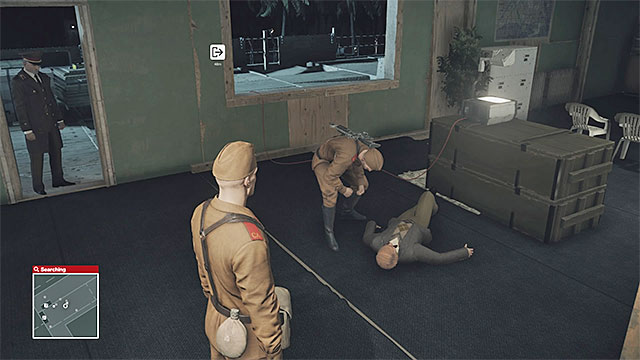 Wait for Knight to be electrocuted

You can return to the building. You don't need to do anything else. Impatient Knight will try to repair the projector. At the same time the KGB officer should return to the fuse box and restore the power and thus accidentally kill the mission target. Of course, don't hide Knight's body - the whole situation should look like an accident.

Option 4: Catapulting Knight from the plane 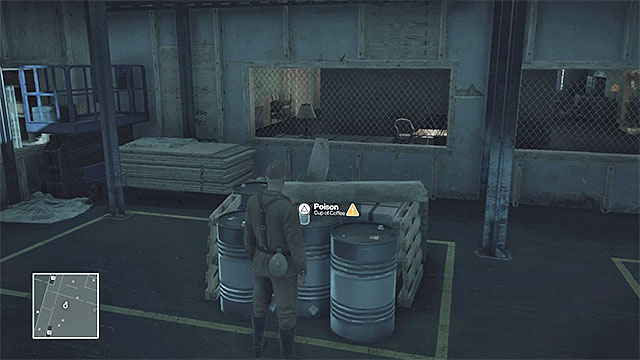 Use poison to get rid of one of the mechanics

It is the most complicated way to kill Knight. However, it is the most impressive one as well as it allows you to catapult the mission target from a fighter jet located in the hangar (M2,1). First obtain the airfield security or Soviet soldier disguise. Then acquire the Emetic Rat Poison. It can be found for example in two places of level 0 of building (M2,2) - to the west from the hangar and in the southern part of the building, near the toilet entrance.

Once you have the poison and clothes, enter the hangar and take interest in the bottle (M2,9) to which you can add the poison. Make sure that you aren't noticed while doing that. 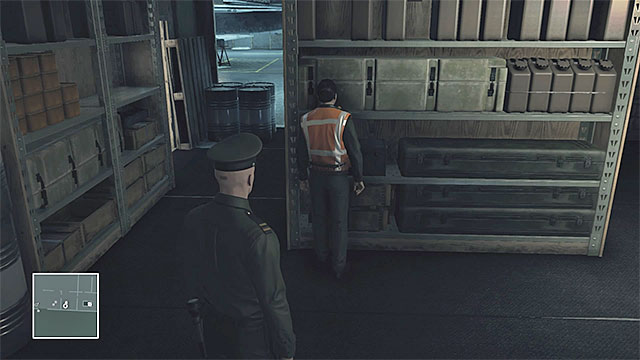 Wait for one of the mechanics working in the hangar to walk towards the bottle and drink the water. This will poison and force him to go to the southern toilet (M2,4). You can ignore or follow him in order to stun him and obtain the Hangar Mechanic Disguise. The mechanic disguise can be also unlocked in other ways - by stunning the single mechanic in the western part of the building (M2,10) or by finding the clothes in the locker-room in the eastern part of level 0 (M2,3). 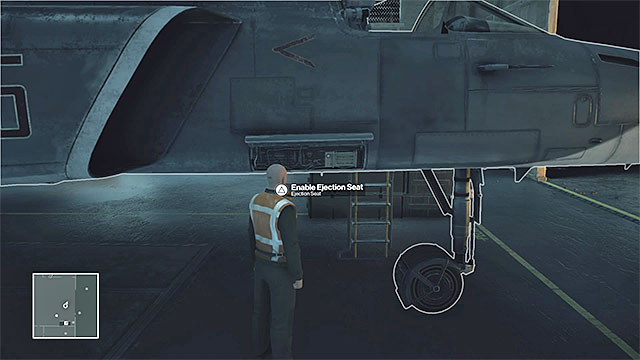 Go back to the hangar in which only one mechanic should remain (don't let him see you). Take one of the wrenches that can be found in the hangar (M2,1) and walk with it towards the plane. You must interact with the plane in the place shown on the picture and sabotage the emergency catapult mechanism. 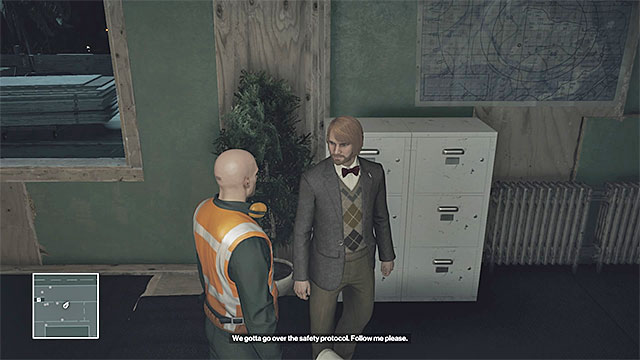 Convince Knight to go with you to the hangar

Remain disguised as mechanic and walk upstairs to level 1. Find Jasper Knight and speak with him. You will convince him to complete the safety procedures. He will follow Agent 47 - go with him to the hangar (M2,1). 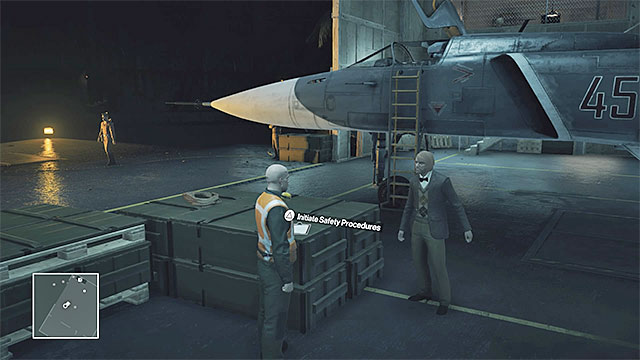 Walk towards the jet from the left and find the safety procedures shown on the picture. Pick up the table, wait for Jasper Knight to sit in the fighter and start checking the procedures. You must press the keys/buttons that appear on the screen in order to give commands to Knight. One of the steps is checking the lever responsible for emergency catapult. Tell Knight to pull it. He will be catapulted from the plane and will suddenly die.