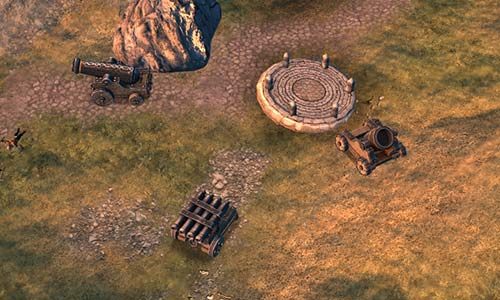 Dwarves don't have any mages in their army. Instead, they get a variety of siege equipment. Each of these units has something that makes them stand out but they all have one thing in common - the ability to deal massive damage from afar. They also can't move and shoot in one turn.

Hellfire's attack reach is 4 tiles. The unit is extremely dangerous at every distance. Unlike the rest of siege equipment, this unit can defend itself from melee units.

Mortars can attack enemies that aren't in their field of view. This unit can shoot over obstacles, e.g. trees or buildings. The enemy won't be able to shoot back. Mortar's reach varies between 3 and 6 tiles so place them wisely and be sure that they have another unit to defend them. Mortars are perfect for defending fortresses. You can also use them for assaulting yards or other parts of a castle that are hard to reach.