Ayiren leads the Dwarves to another stone which fell on their lands. 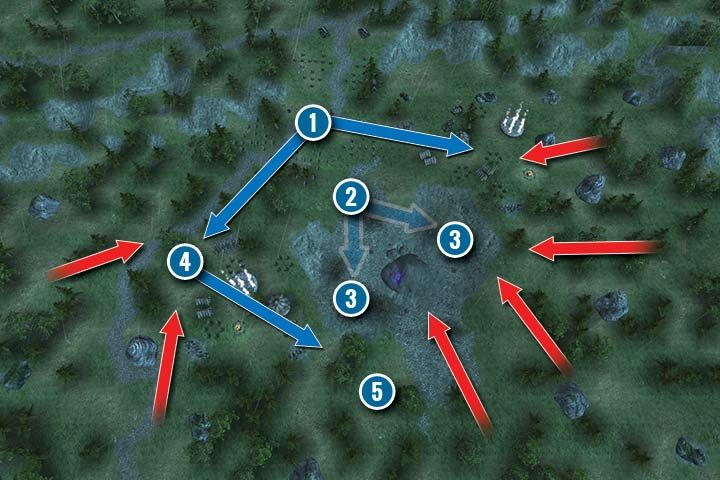 The Elves will be your enemy only for one turn. Don't attack their units. Ayiren will convince the Elves to fight on your side. You can't choose their targets, however, their help is always appreciated.

Send a few of your infantry units to both sides (1) but don't order larger groups to move on the path in the middle. Place Karric (2) north of the stone - he will block enemies in narrow passages near the large rock (3). You can also summon 1-2 heavily-armored units and place them in the forest. Send the remaining heroes west (4). Ayiren can only heal her allies, but she can also inflict a regeneration effect. Thanks to that your armies can fight for a longer period of time and have better chances of defeating Lixius's forces.

The western side is easier to attack and there are a few reasons for that. There, it is easier to block enemies, and you will be able to reach enemy Archers with greater ease. Your artillery has easier access to the battlefield. The Elven support extends the durability of both their units and yours. Destroy all Skeletons and, by using the forest as a cover, slowly move closer to Lixius (5). Remember, the Mage can steal health (regenerates his own health after each successful attack) - use an all-out attack to force him to retreat. Next, help your soldiers on the eastern front, provided they need assistance.