The Dwarves reach an Elven village where they hope to meet with the Elves leader. 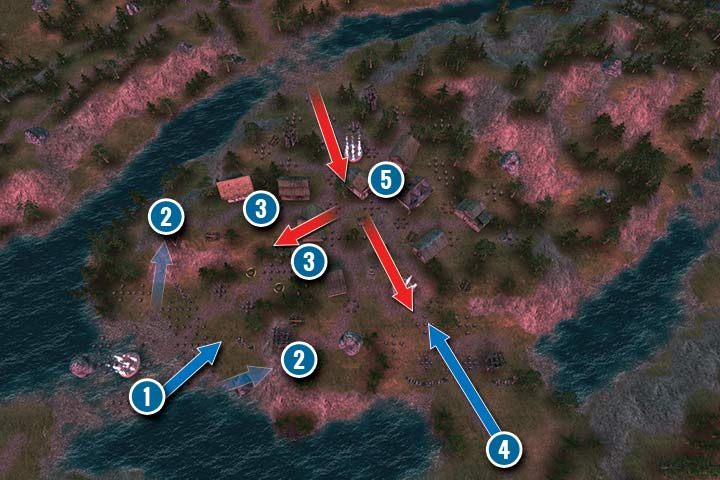 Instead of a conversation, you will participate in another series of skirmishes with the Elves. Capturing the village during the first few turns will be problematic. The enemy sends out Ballistae, heavy siege equipment that can attack targets from afar.

Your troops are placed in the western part of the village (1). Use Riflemen to eliminate Elven Archers on the towers (2). Your heroes will block enemy units between tall buildings (3), immobilizing the Elven army. Always attack Archers and Ballistae first. Elves specialize in ranged units - their Archers can be very problematic. Remember, the nearby chests contain a poison potion and a shield scroll. You have a huge advantage over the enemy - move your units slowly towards the village. Use forests and remember that your Riflemen are a superior ranged unit.

Another group of Dwarves will appear after a few turns (4). They will attack the village from the east. This group consists of Riflemen and Boars of War.

Boars are a Dwarven version of Elven Unicorns. They are powerful animals with a lot of health points and great attack. They also have the ability to regenerate health and to use a charge attack. However, they can't enter forests or fortifications. They won't have any problems breaking through the first line of Elven defense. Don't worry about your allies, their units will quickly reach the village's center (5). Wait for their army - join your forces and attack the Elves in the north. Avoid the Ballistae - their fire is dangerous. You can use the northern teleport at the right moment to surprise the enemy.