Your heroes were away for far too long. In the meantime, Thaldarom has fallen to Lixius. Free the fortress from the Undead. 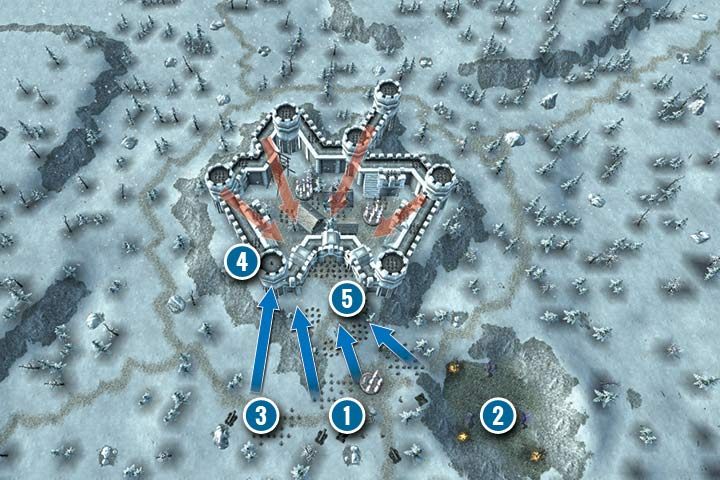 You need to reclaim the fortress. Getting inside the fortress and defeating the new Undead champion is your key to success. Usaliv has a lot of health points and good armor. His attacks ignore armor and immobilize a unit for 3 turns.

You start south of the gate (1). A chest is near your troops. Interact with it and you will activate additional enemy units (2). Inside it, you will find a shield scroll and a Light Healing Potion.

Use Cannons (3) to eliminate the Undead frontline. Karric should attack Undead Archers on the eastern tower. His second attack is extremely useful here - acid ignores armor and a defense bonus provided by a fortification. After that, he and Thurvid should focus on the Undead champion in the western tower (4).

Time to destroy the gates and deal with the enemies inside the fortress. Until then, the enemy Archers should leave the northern walls and go down, to the gate. This is a perfect chance to eliminate them. If you fail to do that, place your soldiers on the walls as fast as you can. Support them with Mortars - don't go order these units to go through the gate. Instead, keep them outside the walls, in the south (5). You can also use the teleport inside the fortress to initiate a surprise attack on the enemy's back.