Serith doesn't give up. He wants to get the scroll by attacking your camp at night. 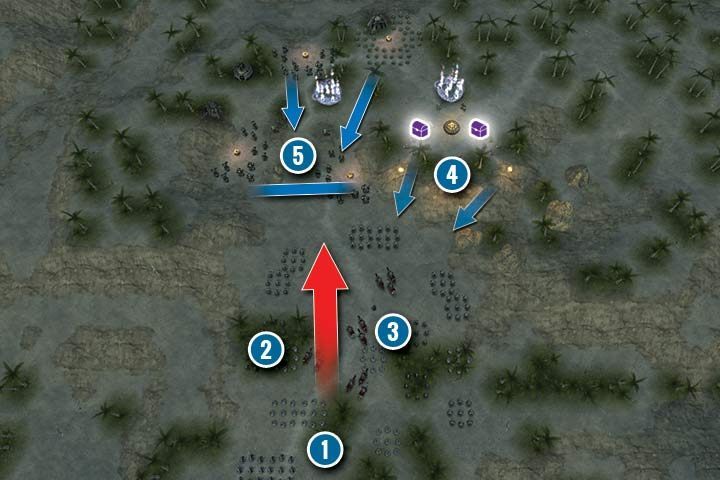 The enemy has surprised you, but your army is ready to fight. Create a good defensive line. Luckily, some of the units are already in good positions.

The enemies come from the south (1). You have to face various Human units, but instead of regular Mages, they will have Hailstormers (2). Serith (3) is a tough opponent - his attacks have great reach, they deal a lot of damage and immobilize targets. Start by dealing with the first line. Then, target Serith. The longer he stays on the battlefield, the more difficult it will be for your units to survive.

Your right line, the one near the altar, is well-positioned (4). The Mages are at the maximum level - they can eliminate the majority of the units with one attack. Place another Mage/Archer/Vulpis in this place. Vulpis and the dragon are very useful in attacking Serith. If they attack at least twice, the enemy hero should retreat.

In the meantime, keep your line of defense right below the camp, near the bonfire (5). The first line should consist of mixed units - a melee unit, a squad of Pikemen next to them, another melee unit and so on. Place all your ranged units behind the first line. Remember to use the Shamans' ability to strengthen allied units - use it on the weakest squads. If you have problems, use Fire Rain scroll on the largest group of enemy units. You can also decide to fall back to upper positions where the rest of your Mages stand.