The Greenskins take action into their own hands and start attacking Dwarven lands. 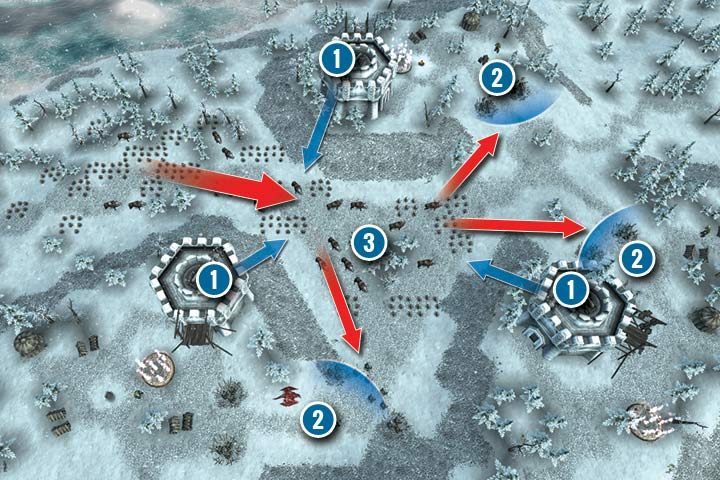 The mission starts at the moment, in which your army has taken control of the Dwarven towers. The unique placement of your (and enemy) units will be both a pro and a con at the same time. The enemy will come from one direction, however, in large numbers (in comparison to the Greenskins).

There are a few of your units on every tower (1). The crew is a cannon and one Mage unit. This is a deadly combination. Although both units are perfectly able to deal with Warriors, Mages are best suited to kill Dwarven Boars. Try to attack using the crew, which has the fewest enemies in sight. Only then choose the cannon and the Mages, who have a wider choice of targets. This way you won't waste any opportunities to eliminate enemies. It's good to keep this in mind as the firepower and the higher ground ensures powerful damage; one attack of that type can eliminate a whole squad.

There is a small group of defenders near every tower (2): Pikemen and Shamans. Those units should stop potential enemies, who managed to avoid the fire from above. Usually, you will face fast Dwarven Boars, though they are no match for your Pikemen. Try to hold your ground as the cannons and Mages should keep attacking the enemy. All three heroes are in the south-western group. At the same time, this is the place, which is most attacked by enemy forces (3). Most of the Dwarven army consists of Warriors and Dwarven Boars. Those are tough units and your army has few troops able to match their power. Thus using the tower crew is especially important in achieving success in this mission.