The Greenskin army encounters a hidden Elven enclave. Before dealing with Neriya, you have to slay the defenders. 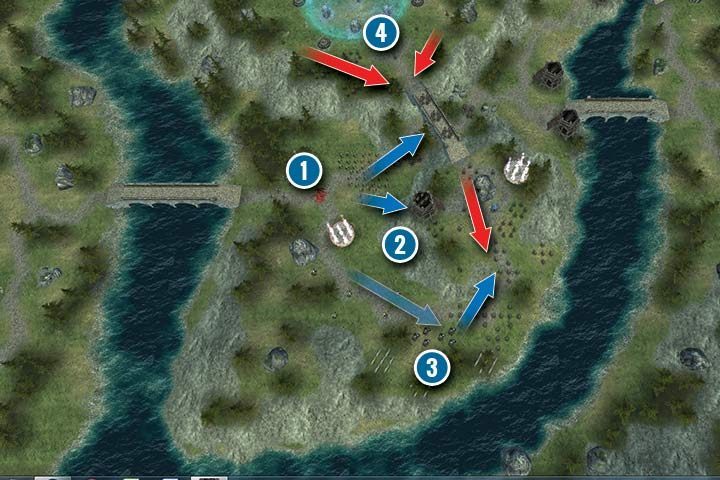 Before you reach the barrier protecting the Elven hero, you have to slay numerous defenders consisting of many different unit types. The enemy forces are divided into three groups: one is on the hillside, the second, on a bridge, and the last one is at the stone circle.

You start the mission at the bridge, at the western part of the peninsula (1). There are many archer and Mage units there. Use Iluds to deal with enemy Mages and Priests.

There is one tower on the hill, which can be a problem for your troops (2). Try to use all available resources to eliminate the defender and take that position. After clearing out the tower send your dragon to that place. The Dragon's attacks will become stronger thanks to the higher ground advantage. Remember to deal with the healers as they will make the fight far more difficult if you ignore them.

The second wave of your units will approach from the south. Those forces are composed of melee fighters and Shamans. Use the latter to strengthen your front line as this will buy you more time. Soon a Water Golem will join the battle. It's a dangerous enemy and should be dealt with caution. It has tons of hit points, good armor, and health regeneration (25 points per turn). To deal with it quickly, you will need a group of units along with the Dragon's ignite ability. This way, you will reduce its regeneration ability (you can also use a Wyvern to block the golem's regeneration ability for a few turns).

After clearing the hillside and the bridge, it's time for the troops at the stone circle (4). Enemy units will usually approach your troops first, which will make the fight easier. Gather most of your ranged units close to the bridge and slay your enemies with ease using a focused attack.