Guarg wants to conquer Elven lands. Those lands are perfect for the Orcs, however, you have to defeat an unyielding enemy beforehand. 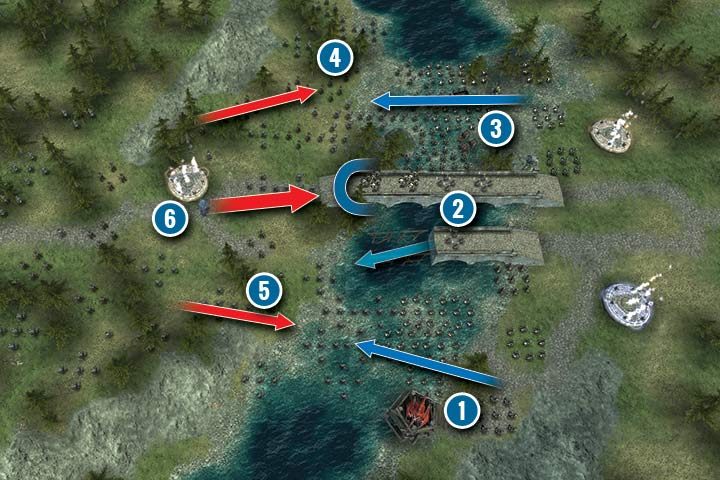 Storming enemy positions, which are on the other side of a river is no simple task. You have a strong army, however, the terrain and the golem on the other side of the river don't make it easy on you. Remember that you have a lot of melee units. Try to acquire more ranged units like wyverns or mages, which will prove to be the best solution for this mission. 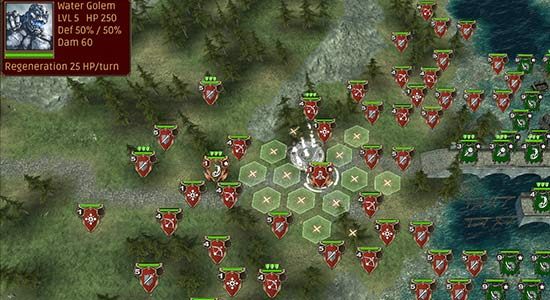 The golem is a difficult enemy. Attack it when you gain the upper hand on the battlefield and destroy his supporting healer squads.

At first, you will be attacked by the armies on your flanks (4,5). Heavy infantry is on the front line; they can cause you a lot of trouble. However, mages and heroes can deal with that threat. In every enemy group, there's at least one medic as well as a few squads of archers. Always try to defeat them first. You can deal with the infantry later, however, Elven archers and priestesses can take away your advantage.

After a few turns, you will have to face a golem (6). It has large damage reduction; it's very tough and has crazy health regeneration. However, he is slow and has short range. It's best to surround him and attack with mages, dragons, and Vulpis. Vulpis can actually defeat the golem alone, however, this will take many turns and he will be fighting in an open field with relatively few enemies. You just need to attack him and retreat while also using your illusion. The golem will chase him, though it will never be able to catch him. In addition, attacking it with a wyvern will stop its regeneration; lighting it on fire with a dragon will also help.