The mage from the previous mission was just a prelude of what your characters' will have to face. Elunore is under siege by human forces. 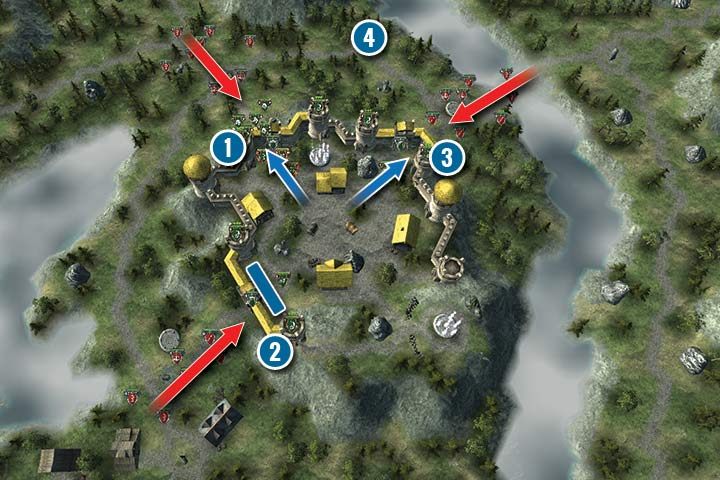 The mages are trying to get Jeger's sword back. Their army surrounds your castle and tries to attack from different sides. A unique challenge awaits you in this mission. The army is composed of three unit types. Those are pikemen, catapults, and large numbers of mages. Human mages have a very long attack range and possess the ability to freeze targets. You have to deal with them using fast units and higher numbers. 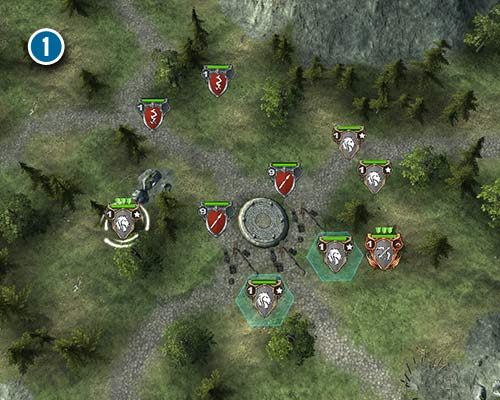 A large number of fast units will quickly deal with range enemies under your castle walls.

Under your command, the army will deal with this challenge easily. It is important to react as quickly as possible in regard to what is happening at a particular time. Don't be afraid of going out of your castle. In one instance this is almost encouraged. A group of your heroes and unicorns is just begging to be sent to perform a counterattack (1). Charging on the catapults is the first thing you should do. Farther on, there are a few pikemen and mages. The latter are your priority targets. Attack the whole group and try to attack the side of the pikemen in order to deal with them as quickly as possible. Unicorns are more faster in the woods, so use this advantage to get to the mages. If you allow them (mages) to come close to your castle walls, they will freeze your mages, making it even more difficult to deal with these enemy units.

The south-west gate should be able to manage the situation without the need of additional support (2). The units there should have no problems with dealing with the enemy attackers. The ballista should first eliminate the catapult and then the pikemen charging at the gate. Next, you just need to wait for the mages to come closer. They have a tendency to attack the gate instead of your units; so use this time to relocate your ballista. You can also send your mages, however, keeping your numbers strong is quite important in this instance.

The north-east part of the castle will require your attention(3). Not only are there fewer units stationed there, but the placement of the walls road and gate is rather inconvenient. The ballista behind your walls isn't capable of destroying the enemy catapult. This time you simply have to wait for your army and heroes to clear out the first waves. After that, proceed with a counterattack. If possible, move your units back into the courtyard while being wary of the attacking mages. They ignore terrain obstructions and can reach you with their attacks.