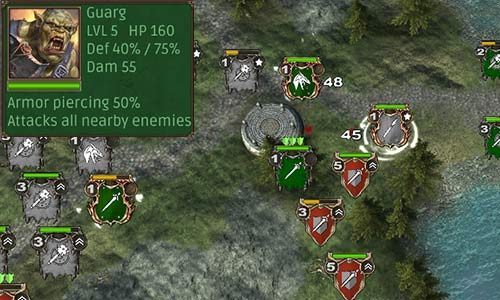 A powerful orc warrior who will join your army in Mission 9. Like a typical orc, he deals a lot of damage and has a lot of life points. At first he has very weak melee defenses, but he makes up for it with powerful protection against ranged attacks. He can move faster than an average orc - he can move as much as 3 fields. He's got two special features. The first is the ability to ignore 50% of the enemy armor. The second, very unique, is the possibility of attacking several that surround his current position. This enables him to destroy up to 6 enemy units if they are weak enough. Always try to get the most out of this ability and attack more than one unit. This is a very useful method, especially when you raise armor penetration 100%.