Arcaena heads to the Druid Circle but she encounters a group of aggressive animals. 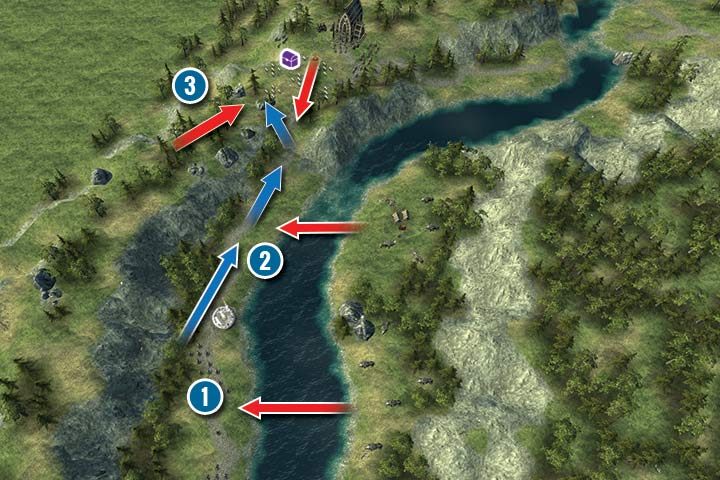 The mission starts in the south, on the river's left shore (1). A teleport is near your position - you can use it to summon ranged units.

In the first part you have to face Dwarven Boars. They can use Charge skill and regenerate their health. In addition to that they can also swim in this mission (they move on the river's hexes). Because of that you should eliminate single Boars as fast as possible. You can wait for them in forest - they won't be able to use their Charge and your units will get additional defense (1). You can also be the one who attacks first and destroy your enemy as fast as possible before it gets closer to the forest. After that you have to place your units above the teleport and defeat the second group of Boars and Wolves that move towards you from the north (2). If possible, you should keep your squads in the forest and surround the Boars located on the shore. Arcaena can defeat Wolves with one attack. Order your Shadow Warriors to attack the Boars. 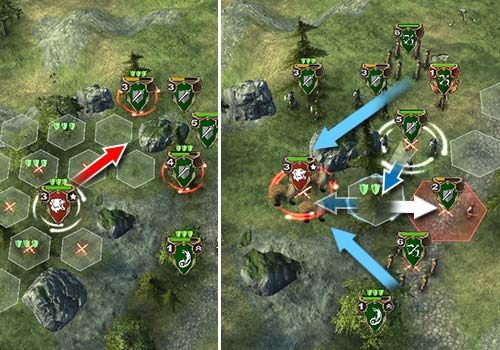 Place your melee units in the forest, ranged units should stay behind them. If you need, you can switch Shadow Warriors with the ones with full health. This will allow you to defeat the enemies.

During the last part of the mission you will have to defeat a powerful Bear (3). You receive additional archers. A Poison potion (strengthens a unit's attack) and a little bit of gold can be found in the chest located in front of the tavern. Use this potion only when you have a small number of units. The Bear can be defeated quiet easily. Place two squads of Shadow Warriors in the forest, right next to the glade. Your archers should stand behind the big boulder and on the road below - thanks to that they will be able to shoot from behind your warriors' backs. Wait for the enemy and start the fight. Change your squads' positions if the ones who are currently fighting with the Bear have a small amount of health. The forest gives them additional protection, let the archers finish the job.