Time to deal with Baal Shem Tov. He hides in a small Elf fortress which complicates things a little bit. You have to face both the Undead and the Elves. 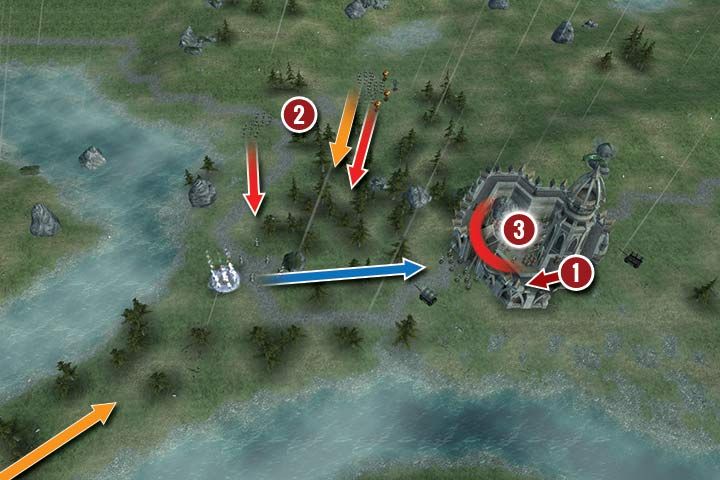 You start the mission near an active teleport, close to the enemy fortress. The starting army consists of 4 Mages and 2 heroes. You can use additional units - ranged ones are the most important here but 2-3 melee units can also help you.

The enemy hero hides in the eastern part of the walls (1). He stands there throughout almost the entire mission and he summons random units (Skeletons or Golems). The only way to eliminate him is to either shoot this mage from a distance or destroy the gate and get on the walls by using the tower with a roof. However, your melee units will die before they manage to reach him. The best way to eliminate him is to summon Skeletons right next to his positions and shoot him with the rest of your units. In the meantime, you have to freeze enemy units (including Archers and Mages) that are close to your positions. Fire Rain is very useful here but only against the Elves. You can also use Rage/Mind Control on the Elf Mage.

In the north, there are additional Skeleton and Golem units that will move towards your army (2). They need a few turns to get dangerously close to you. Elf units, Infantry and Archers, are inside the fortress (3). However, the most dangerous unit there is the Elf Mage because he can lower your units' attack for 10 turns. Freeze him first.

What is more, the fortress is the favorite place for the enemy Mage to summon additional units. Try to freeze units in the gate and in front of it. Thanks to that the enemy will have to send units through the back gate. Defeat the defenders, take positions inside the fort and on the walls. Prepare for the Undead (2). Freeze Skeletons in the gate or in front of it. Thanks to that you will fight with less units. Blocking this place is important so don't kill a frozen unit. Instead, focus on shooting at Stone Golems, Skeleton Archers and Lava Golems.

Playing the mission on a higher difficulty (orange markings on the map). The fort is filled to the brim (3). Fire Rain can be useful here, especially if it hits the Elf Mages. More Skeletons and Golems approach from north. There is also another group of regular Skeletons that marches from south-west.