This is an unusual mission. Instead of defeating everyone, you have to reach the fortress located in the north. 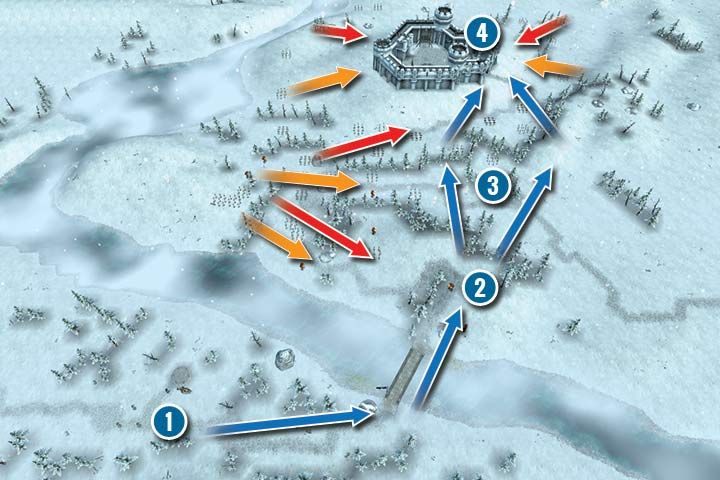 Your squad consists of 5 units - 2 heroes and 3 Mages. One of the Mages has to reach the portal located in the Dwarven fortress. Complete this objective to finish the mission. The fortress' garrison fights with the attackers throughout the entire mission. However, you don't have to worry about that. Your units are far into the south, near an inactive teleport (1). You will quickly come across a new enemy, Lava Golem. He uses powerful melee attacks and is invulnerable to magic but, just like Cavalry, he can't enter forests. You can use this and escape him without any problems. However, if you want to face him, you should then try to defeat this enemy in one turn. Percival's Charge is crucial here. Also, remember to attack with all units.

Get closer to the bridge. More Golems await on the other side (2). They won't get on the bridge if you attack them individually. Use the previous tactic and attack with all units. It is time to reach the fortress. Hordes of Skeletons and Golems wait for you in the west and along the road (the red arrows). Breaking through these armies is rather impossible. You can choose from two paths that lead north (3). The one on the left is a little bit quicker but you will come across enemy units. Skeletons aren't a problem if you have to face only a few of them. You can freeze these enemies and order the Mages to move forward and attack. Thanks to that you won't lose time on immobilizing the enemies. The path on the right is longer but you will avoid fighting with multiple foes. The last thing that you have to do is to enter the fortress (4) and order any of the Mages to approach the teleport.

Playing the mission on a higher difficulty (orange markings on the map). The enemy gets a lot more units. Use the previous strategy and don't engage in combat, make shortcuts by walking in forests and approach the fortress from the east. The number of enemies can be too much for the fortress' defenders. This means that you may have to fight near the fortress if you are too slow. Use your experience from the lower difficulty levels and try to reach the destination as fast as possible.