Having dealt with the enemies to the East and defeating the goblins, it's time to take on the orks. Let's begin with their forward camp. 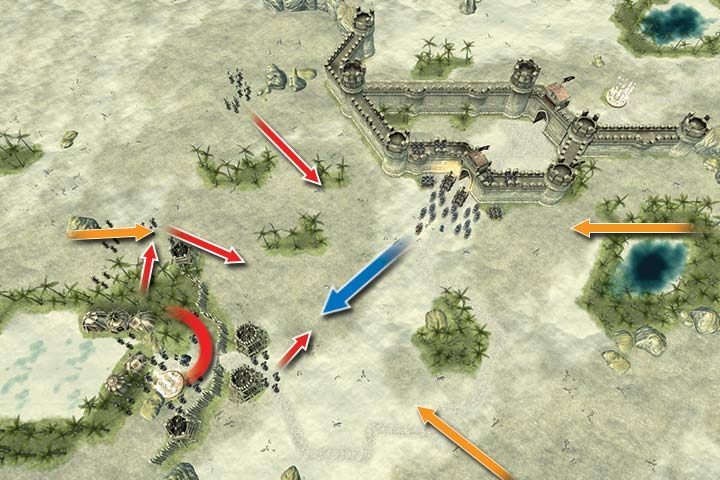 This mission has its pros and cons. The ork units are smaller, as they can have no more than 3 soldiers each, and relatively few on the map (13 units on normal difficulty, when you have 15 units under your command). On the other hand, the greenskins are quite durable, and deal hefty damage. What's more, the archers are located on the towers, around the fortified position (red semicircle). You'll have to properly utilize the Catapult and the Mage from your initial forces. The portal is located in the enemy camp, which you can use later. Before you march on the enemy (blue arrow), wait for the Pikemen from northeast to attack (red arrow). This unit will actively pursue your forces, so it's a good idea to take care of it first. Place your crossbows on the walls near the Pikemen path and wait. Defeat them before you assault the enemy camp. 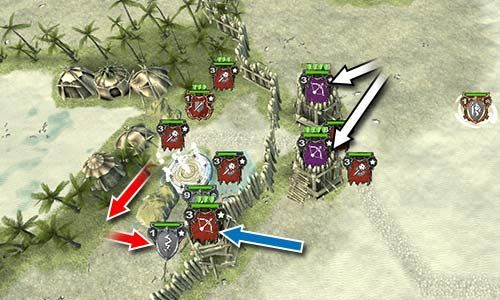 A Rage scroll used on the Archers inside the outer tower can help you a lot (the white arrows), although you can defeat them by using the Catapult. Using Rage on the Archer inside is a better idea because he can shoot enemy units that are inside (the blue arrow). Using a teleport only makes sense if you retreat your units down the map. This leaves only one enemy unit that you have to deal with while the rest of the enemies will go around the teleport (the red arrows).

The towers located in front of the entrance are dangerous to your army. Wait for the Orc infantry to attack you and then start freezing and using the Catapults. An alternate solution to that is to use either Rage or Mind Control on the Archers. The downside of this solution is that you can't use these towers to attack the enemies inside the camp. Using the scrolls on the southern tower is a better idea. Start attacking the enemies inside and summon additional units. You can use a few Mages to freeze the remaining Orcs and call for ranged units that will fight with the enemy hero. Orcs can use the forest in the north to leave the camp if the entrance is blocked. You can use this information to fight with less enemies.

Playing the mission on a higher difficulty (orange markings on the map). You have to face additional squads of Pikemen that will approach from the east and the south. Reaching your location will take them a few turns. You should wait for them so you won't be attacked at a wrong time. Also, additional enemy Infantry units are in the camp and a little bit to the north from it. Move slowly towards the camp and eliminate enemies. If possible, you should lure out enemies from the camp so you will be able to use the power of your Cavalry.