Time to capture the Goblins' capital! This is a long mission during which you have to break through a few enemy defense lines. However, you are supported by Dwarves whose strength and numbers should be enough to complete this mission. 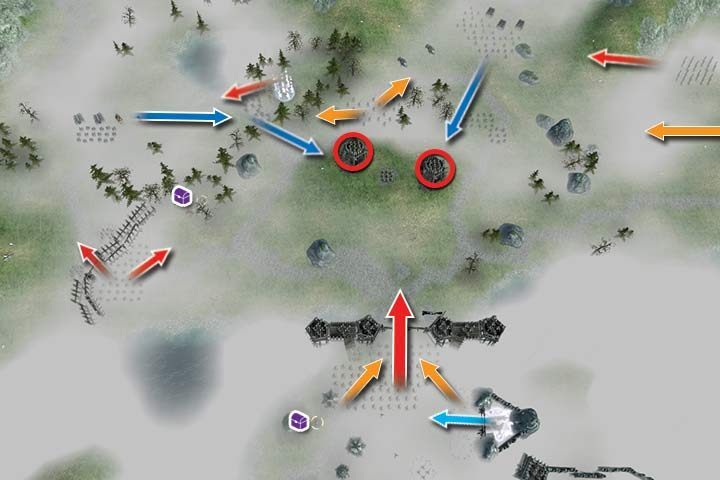 Clear the area around the teleport inside the forest and prepare for a counterattack that will come from south-west. Wolves are targeting Dwarves in the east. Help them. After that you can start moving your armies towards the towers (the blue arrows) that are in front of the first line of fortifications. The archers on those towers will cause you a lot of problems (the red circles). However, you can use your hero-mage and summon two additional Mages to defeat these foes. You can defeat them only with ranged units so bring Siege Equipment and Crossbowmen to get rid of them once and for all. Now, you can open the chests with Rage scrolls. 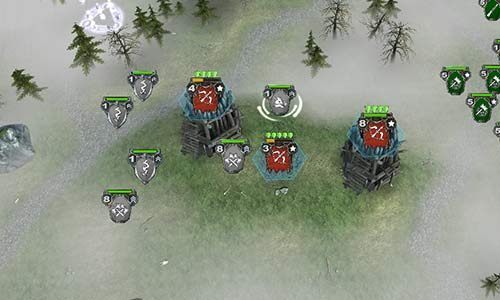 Use the three Mages to freeze the Archers. Then, bring the Cannons to deal massive damage.

The first line of the walls has Battle Mages and Archers located in towers. Gather your forces near the walls but don't get in the enemy's reach. In most of the cases, the enemy sends armies that are behind the walls to counterattack your units (the big red arrow). Order the Dwarves to eliminate them quickly. Use Boars and Berserkers because they can regenerate and deal a lot of damage. You can summon one Mage by using the teleport behind the walls and order him to freeze enemies. However, you should do that when there aren't many opponents around. The key here is to make a simultaneous attack: Mages should focus on enemies on the walls while your Infantry and artillery should get closer to the walls so they can attack too. Otherwise, Goblin Archers and Battle Mages will annihilate your forces. 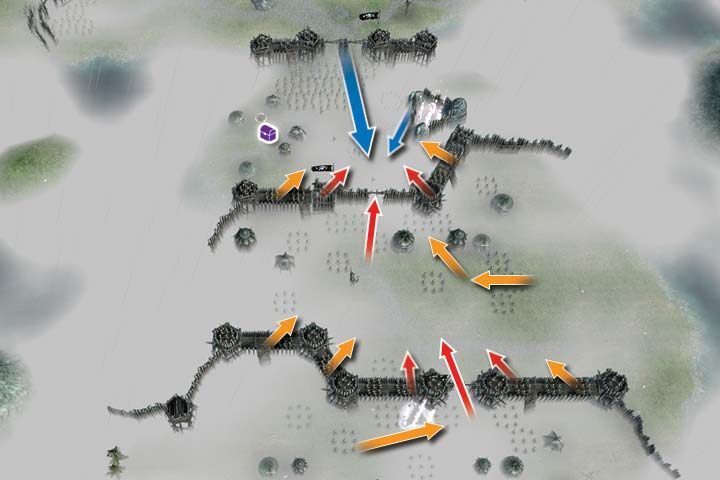 The armies defending the second and the third defense line are similar to the first one. Mages on walls, Archers in towers (the small red arrows) and Infantry behind them that waits for a counterattack (the red arrows). Slowly move the artillery closer to the enemies and start firing. Your Siege Equipment has a greater range which means that you can eliminate foes without any problems. The enemy's hero is located between the second and the third line. This unit is very resistant and can reduce received damage. Focus your shots on him and remember that this hero is invulnerable to freeze.

Playing the mission on a higher difficulty (orange markings on the map). You have to face additional groups of Wolves located in the east. They won't be a challenge if you wait their attack and use strength of the Dwarves. The units in front of the towers are a bigger problem. Rely on Berserkers and Boars and send them somewhere safe so they will be able to fight again with full health.

Besides that, the walls from the first line are filled with Battle Mages. Also, there are additional Infantry units behind them. Start attacking the walls by using Mages and Siege Equipment but do that only from one direction so your units can defeat enemies one after another. Other defense lines get additional Archers on walls and Infantry in various parts of the stronghold. Let the enemies get closer to you so you can shoot them with your artillery.