Another mission that brings about a new faction. This time, you will have to fight elves. The elves are all about mobility and ranged units. Almost all of their troops are able to move quicker in forests, and their ballista has a range of 8.5, compared to 7.5 of your catapults. 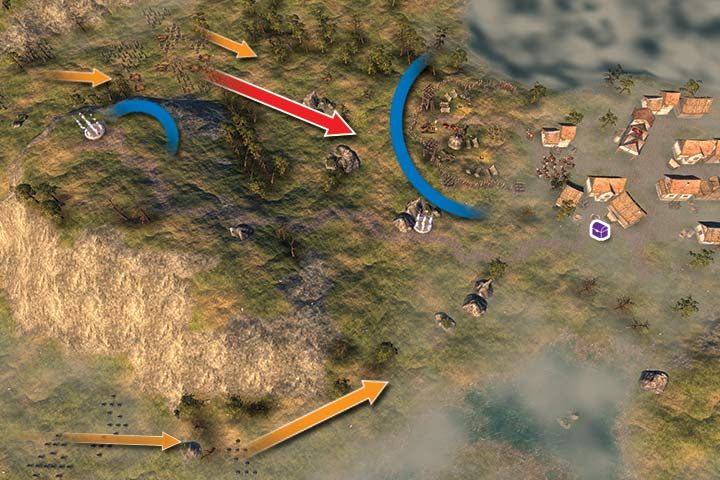 Defending this small fort will not be easy. The enemy has many ranged units, and the only defense you have is a wooden palisade. You will have a few units right at the beginning, but the units that you bring through the portal will decide the outcome of the battle. There's a second portal right below the fort, which you can use to reinforce the garrison. You should also consider opening the chest - it contains three Fire Rain scrolls.

Using the hill as a vantage point for your archers is a sound strategy. Most enemy archers won't reach you there, but you still can be attacked by artillery. Summon catapults and Mages. The former will be able to destroy every enemy below the hill - the Mages will hold any counterattack. You could opt for crossbowmen, but they won't have the range. The enemy will try to destroy the units on the hill first and the garrison after that. Generally, the enemy attacks the nearest unit in this mission In this mission the enemy focuses mainly on the nearest units but their main goal is to attack the camp (the red arrow).

Playing the mission on higher difficulty (orange arrows on the map above) means not only more enemies in the north, but also enemy reinforcements in the south. Both groups have many ranged units, so you should make sure your units are equipped well and that you use the topography to your advantage. Depending on how the battle goes you should either bring more troops to the hill or converge in the village.