The difficulty of the first mission comes from the fact that you have to use the starting units and you can summon only one Militia squad. The hero will be your main unit in fights with Goblins. 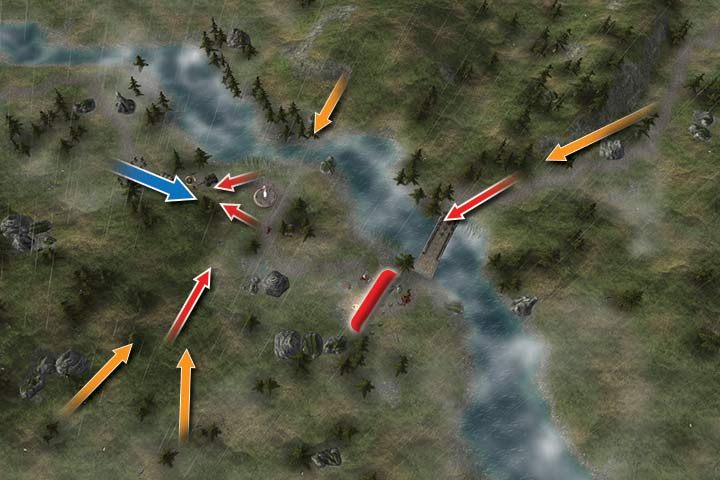 The situation on the map doesn't look good. There are a few wolf squads and a teleport near your starting position. Use forests to your advantage, summon units behind the wolves' backs and defeat the enemies. Pick up items from the chest by using your hero and heal your units if you need. After that you have to prepare for a counterattack that will come from the south. Your hero should defeat most of the enemies by using charge ability.

Then, you have to attack the group of enemies located in front of the bridge. Try to attack a squad that is the closest to you and then use your entire army to defeat the incoming enemies. The remaining foes are on the other side of the bridge. Because of that you should use the strongest unit while you are on the said bridge. Cavalry is the best option here.

Playing the mission on a higher difficulty (orange markings on the map). The number of enemies has increased. You have to defeat more wolves. The enemies near the bridge are more experienced. Also, there are a few enemy squads in the north that will try to cross the shallow part of the river. The sizable army that approaches you from north-east will be your biggest problem. Here, you also have to fight on the bridge and use support of ranged units as well as infantry/cavalry.