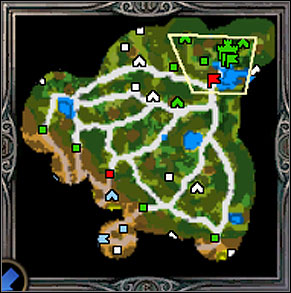 Do not cross the Empire's borders.

Focus your hero's development process on archery, fast travel and destructive magic. Black magic can also come in handy. This will greatly help you in the following missions.

Visit a lookout point left of the city. Blue player is attacking the green one's garrisons. If one of them falls, defeat the enemy that attacked it and put some of your troops there. The garrisons should hold without your help, though. Don't let yourself too far South, past the garrisons. After two months and two weeks you'll see a red unit approaching the third garrison, looking from the top. Move more troops to that garrison, so they weaken the enemy before Findan confronts him. When the red unit appears, "keep the border" quest will be completed.

The red unit is heading straight for the city. Stay there to make things a bit easier. 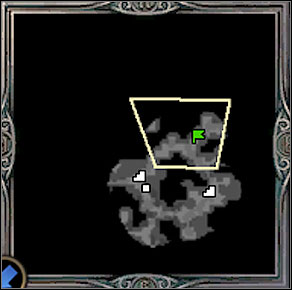 Don't take too long to power-up, because red units are doing exactly the same and you don't want them to get too powerful. Use the dungeon entrance to the North. The nearest exit to the surface leads to an island with mines. Go North and capture red player's city (1). 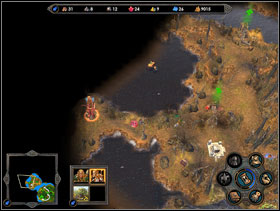 Don't waste units on reaching the obelisks if the defenders are too strong.

Use the shipyard to build a ship in your city. Sail North-East to capture another town (2). 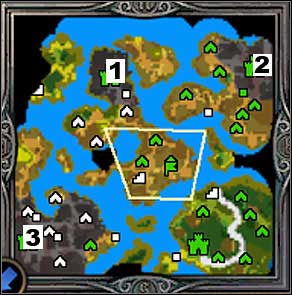 Sail to the North. Go past the rocks and head South to reach the last city (3). When you have all 3 of them, build a dragon recruitment point in Mensyl. Visit the obelisks around the map. They summon dragons, which appear somewhere on the map so you can capture them. You have to assemble a force of 20 Dragons to end the scenario. 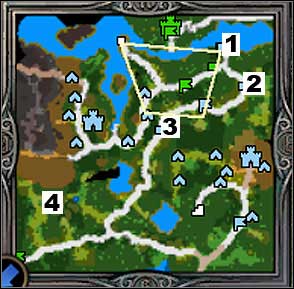 The mission kicks off with a battle for the city. Try to take out as many attackers as you can to make things easier later. When the battle ends, use Findan's army to take the city back. Violet player will attack you from the East, and will do so every two weeks.

Hold the city against attackers.

Assemble an army in your city: 50 Elder Druids, 30 Silver Unicorns and 10 Green Dragons.

Sail to the cove to the South-East of the city (1). Don't support Findan with Druids, Unicorns and Dragons, use other units instead. Near the landing point there's a Hunter recruitment point (a green square on the map). It's good to summon a separate hero who'll take the Dragons out of the city and keep them somewhere safe so they don't get hurt during the attacks. Leave them in the city when you've got all the units required by the above quest.

Findan must move quickly, as he is being chased by the blue armies. Don't try to fight them, just run. Don't try to capture the cities, either. Only fight the two Garrisons: (2) and (3). 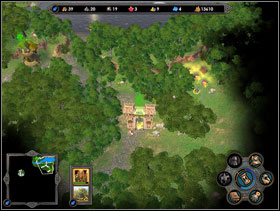 Garrisons and prison guards are the only enemies worth fighting now.

Free the imprisoned heroes from the towers: one to the South-West (4) and one in the dungeons (5). 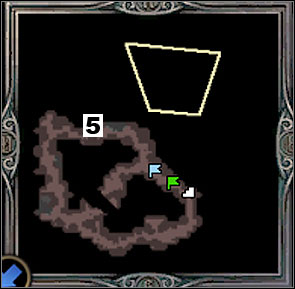 Order them to stand at the end of the South-Western path, so they don't get in the way. Findan must run all across the map, as he mustn't get caught. Don't go back to the city with him before you have enough units to complete the quest related with them. Use any means necessary to get away from his tail until the quest is complete.