Harry Potter and the Order of the Phoenix Game Guide & Walkthrough by gamepressure.com

Harry Potter and the Order of the Phoenix Game Guide & Walkthrough

Padma and Parvati Patil: Revealing the Room of Requirement

Very schematic task. Speak with sisters, then go to the tower of Divination where you'll meet them again. Talk to them again, and...That's all.

Revealing the Room of Requirement

You need to find Anthony Goldstein, Michael Corner and Terry Boot. Since they aren't hidden anywhere, the word "find" isn't too appropriate. Just use Marauder's Map and run for a while.

Susan Bones: Rescue from the Slytherins

This is going to be your first more serious fight. Quite easy, because you have support of your friends. To start it, point your wand at Crabbe and Goyle. How to win the fight? I'd recommend combination of Protego and Expelliarmus.

Zacharias Smith: Helping with the homework

Zacharias needs a few items which can be found around Hogwarts. First one is just a few steps ahead - it's a book about monsters. It's quite easy to spot. :) When you bring it to Zacharias, he'll ask you to get a potion from hospital wing - go there. 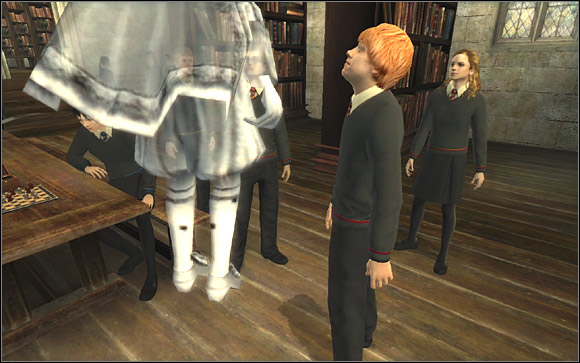 You can follow the story or do some teacher tasks. I describe these tasks later, for now let's move on.

When you gather all DA members in Room of Requirement, you'll be able to learn 3 new spells (actually, you'll be able to do it even earlier, after finishing Ginny's, Colin's and Zacharias' tasks). In the end, last spell opportunity will appear (Cho's task).