This page of the Halo Infinite guide contains a walkthrough of the 12th main mission, The Command Spire. The following solution explains how to reach the observation platform, how to defeat (again) the Adjutant Resolution boss, how to destroy enemy aircraft and how to shut down all spires. 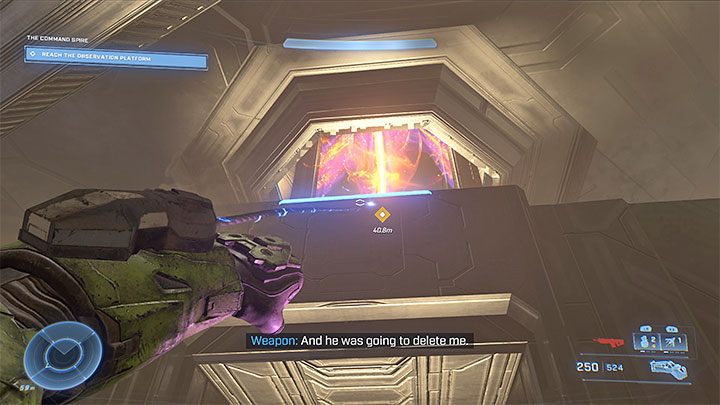 Start by reaching the terminal to access the system.

You will be forced to using the grappleshot to get to the next platforms. Look for blue edges, which point to where you can grapple your rope. Always aim the launcher accurately so that you don't fall after using it or fly to the wrong place. 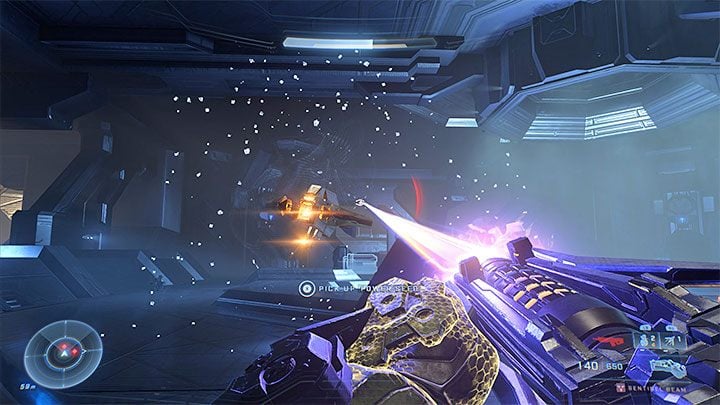 In the location with the power seed, you will probably encounter the first flying vehicle surrounded by a force field. As far as this confrontation is concerned, you just have to attack the guard longer to destroy the shield first and only after that the armor of the flying vehicle.

Pick up the power seed and bring it to the terminal. 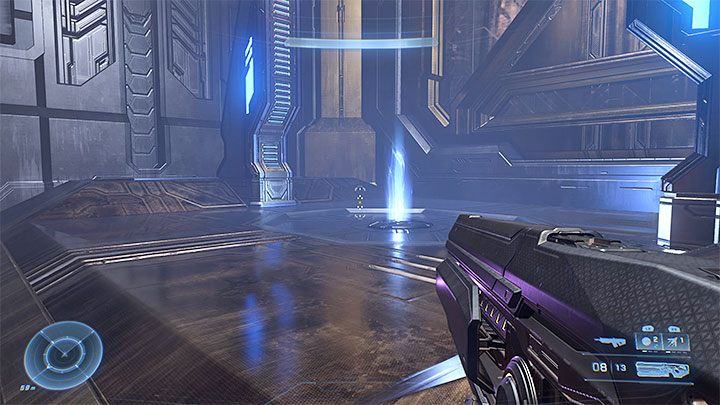 Getting through the tower resembles the journey from the previous main mission, so expect to encounter numerous groups of the Banished and machines trying to slow down your progress. Along the way, use the scanner regularly to find supplies.

On your way, you will come across a few teleporters, which will automatically transport you to other places within the spire. 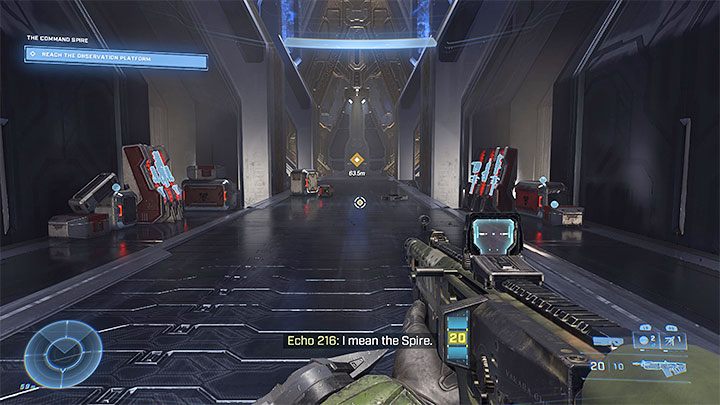 In the place shown in the picture, make sure to replenish your supplies because soon you will engage in a larger confrontation.

Eventually, you will reach a larger arena where you will again face Adjutant Resolution - a big flying machine. This is the second confrontation with this enemy - you've already had the opportunity to face him in the Spire mission. 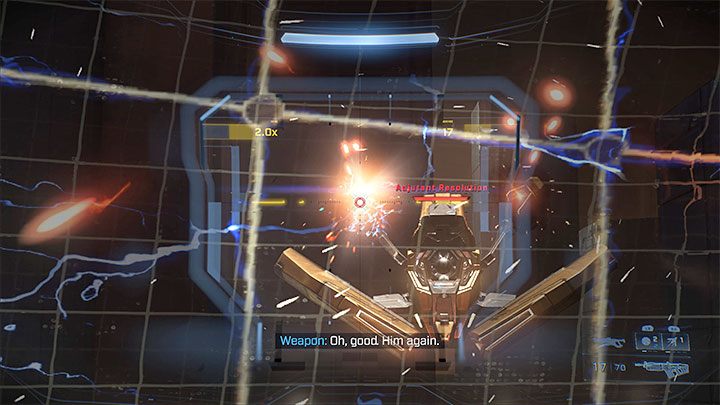 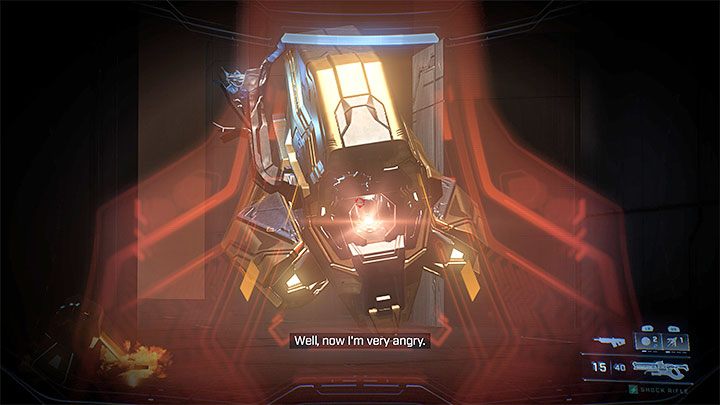 The basic principles of this fight have remained unchanged - you must aim at the machine's cannonsin order to weaken them and ultimately destroy them. Each destroyed cannon will throw Adjutant Resolution into a weakened state and will expose its core. Use this opportunity to use the best weapons and deprive the boss of as many health points as possible. 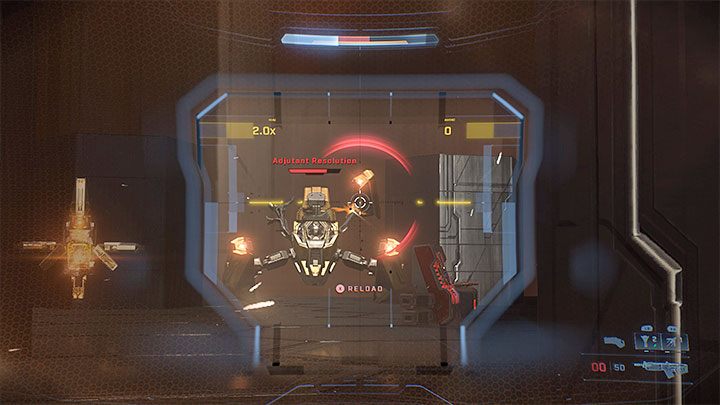 The only real novelty of this battle is that there are guards (small flying vehicles) whose task is to help the boss. Defeating them is not difficult and it would be recommended to deal with them at the initial stage of the confrontation.

Also pay more attention to hiding behind covers and / or setting up drop walls because the boss's ranged attacks can quickly deprive you of the shield and kill you.

Shut down all the spires 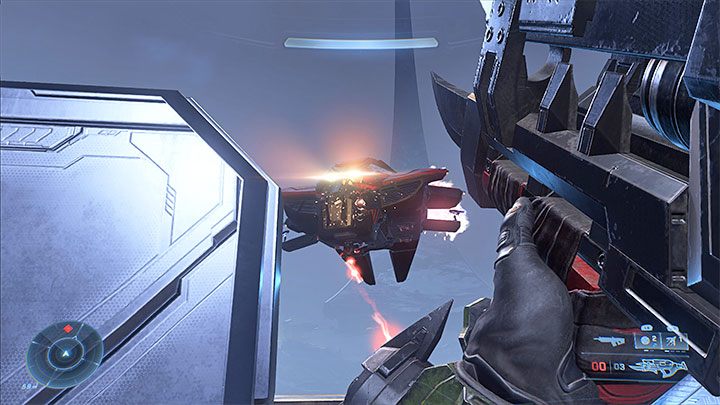 After winning the boss battle, use the new terminal and you will receive another mission objective. Take advantage of the opportunity that you can surprise the elite enemies, which can be seen in the distance, to weaken them even before you enter the fight.

The main difficulty of this battle is that you need to destroy several large transport ships. Use launchers or other high-explosive weapons to fire at them. You don't have to aim at a particular point. 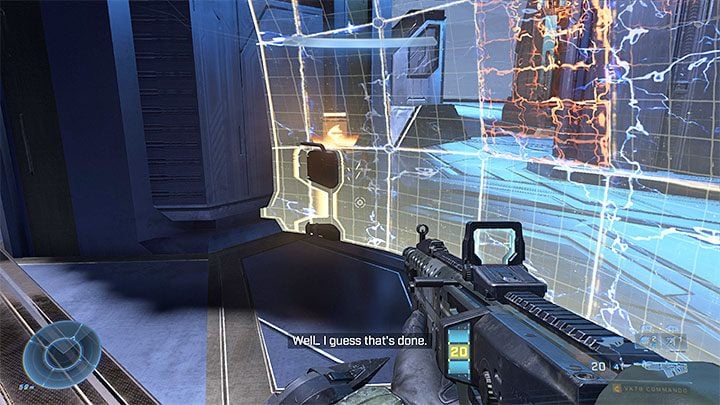 It is very important for you to avoid the fire of the flying machines. For this purpose, you can hide behind large covers and run around a lot as well as set up drop walls so that you can continue to fire at enemy ships without having to hide during their attacks.

At the very end of the mission, get to the terminal to deactivate the spires. After watching the cutscene, the next main mission, Repository, will start.