On this page of the Halo Infinite guide, you can find a walkthrough for story mission 6 (Excavation Site). Our walkthrough will help you in reaching the excavation site, finding the laser drill control console, disabling the regulators and dealing with Bassus boss battle. 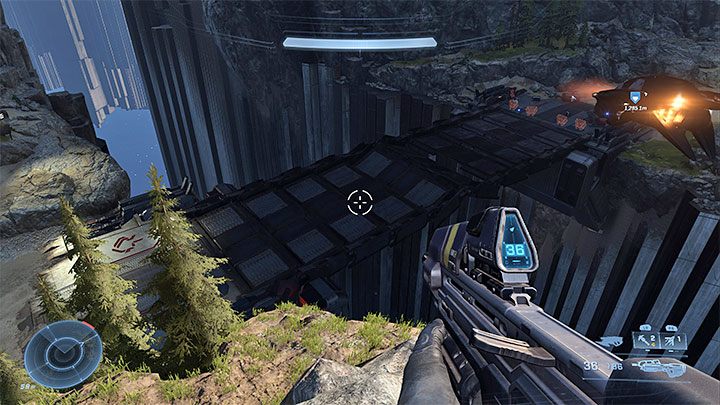 The task begins right after completing The Tower story mission - to initiate it, you need to visit the room with the Spartan. Start by leaving the tower - fortunately, Master Chief can jump and land from great heights without losing life points. As a result, you don't have to descend floor by floor or use the elevator.

The Excavation Site is in a separate area of Zeta Halo, north from here. Both landmasses are separated by a chasm - to get past it, you can use the drawbridge shown in the screenshot above. Take care of the enemies on the other side of the chasm using ranged weapons or use a rocket launcher and grenades to quickly destroy stationary force fields. 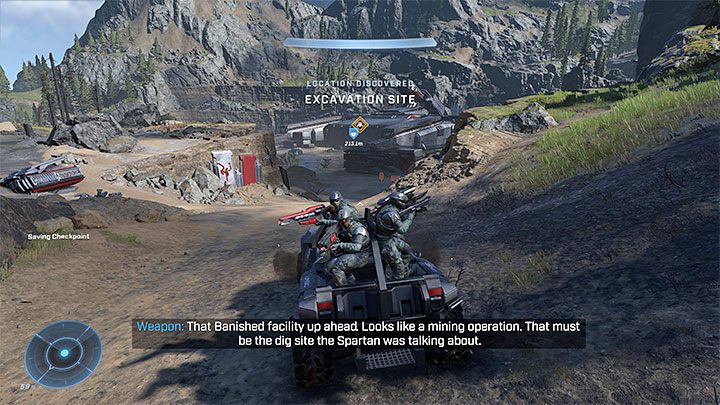 As you try to use the marked Conservatory entry, you'll learn that it is temporarily unavailable. 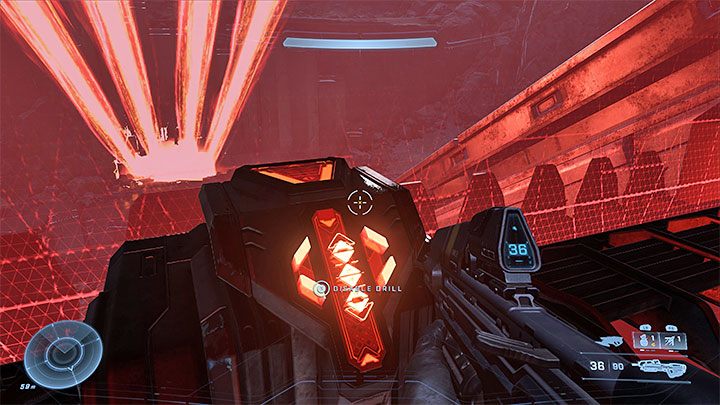 Watch out for enemy reinforcements that will appear at the excavation site - these include new charging enemies which have to be kept at a distance at all costs. Eliminate enemies from the distance and use Grappleshot to get access to and engage opponents from higher shelves.

The large drill can be accessed by a gravity lift which is infested with multiple (albeit weak) enemies. Make your way to the drill console, and The Weapon will tell you that to proceed you need to sabotage 2 regulators. 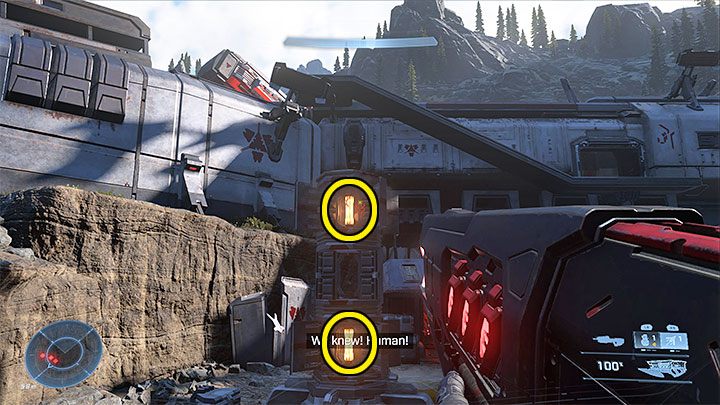 There are 2 regulators (marked on your map) in the excavation site. You can access them in any order.

Simple interaction with either regulator will not suffice. To really disable the regulator, you need to destroy 2 Cooling Pylons found nearby. See the screenshot for what to target and fire at. You can use any weapon you want, but those more powerful will do the job faster. 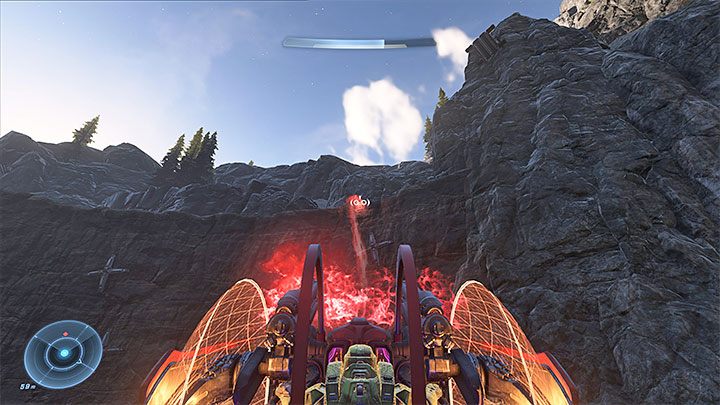 When dealing with the pylons, expect enemy attacks and new snipers entering the battlefield. Aside from your equipped weapons, there is a large stationary cannon in the excavation area that can be used. Use it to dispose of the enemies quickly, but remember that it has limited durability and can explode, killing Master Chief in the process.

Remember that you'll surely encounter reinforcements delivered by flying machines - you can start eliminating enemies before they are released so they are in one place and won't scatter around the battlefield. 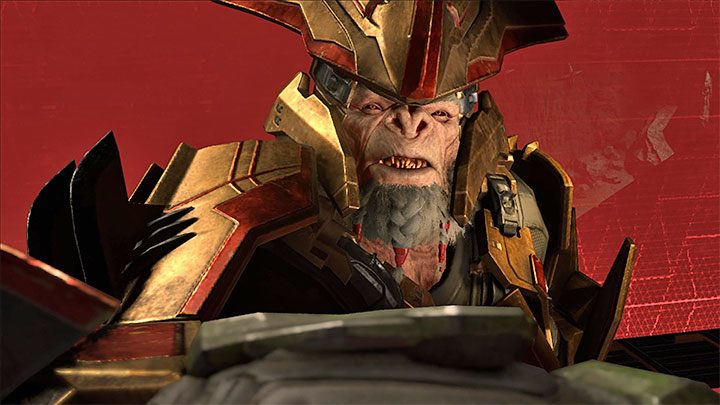 After sabotaging both regulators head back to the main drill console. Same as before, you must use the gravity elevator.

Your attempt to access the console will be interrupted by Bassus, one of the bosses of the game. You need to defeat him in order to be able to continue the mission. 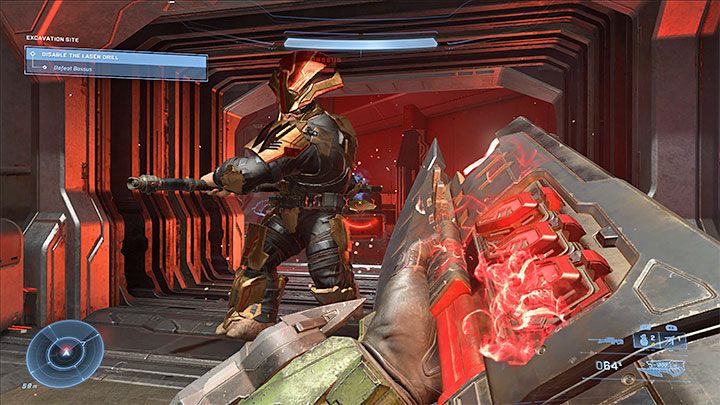 Bassus is equipped with a large Gravity Hammer which means you should keep him at a distance. Stay mobile at all times during the battle. You can also use the Grappleshot to distance yourself from the opponent faster. 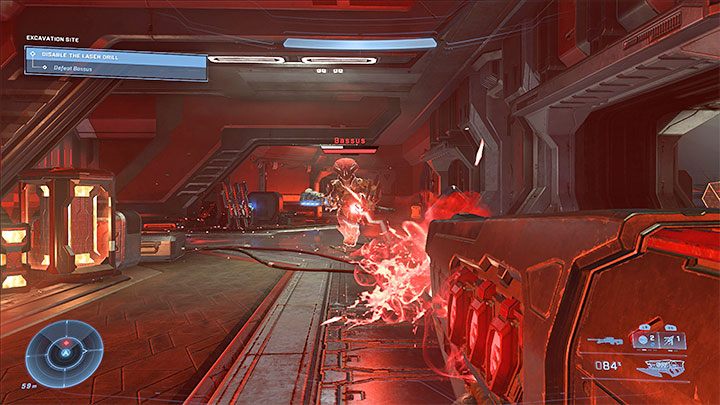 We leave the choice of weaponry to you, but as always, it is better to use more powerful weapons as they deal more damage to the boss. You can also try to hit the boss with special grenades to stop him from chasing you for a short while.

Bassus is equipped with a shield which durability is displayed by the white bar - you need to deplete the shield before you can make real damage. Only after depleting the white shield bar, you can deal real damage to the boss. Unfortunately, if you stop attacking the boss for a while, the shield energy may be restored to some extent.

Once defeated, Bassues drops a hammer, which is one of the best melee weapons in the game. If you've defeated the boss, continue by sabotaging the drill. This time, the action will be successful, and you can continue to the next mission. You will also receive 350 Valor.