Along with the new DLC you will acquire an access to the bounties planted on you and on others. The way it works is simple: Every player can place a bounty over on other player. It can be done for the sakes of retaliation or simply for fun. A player who kills a person marked by you, will get the reward which will be transferred from your personal in-game account. When it is someone else who places the bounty, you will be notified over the radar with the nickname of the marked player. The way of killing him is up to you. If it is your head which has been marked, the notification will be placed in the middle of the screen written in a big white font. 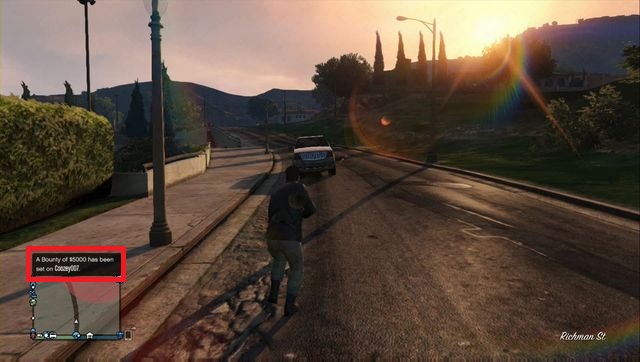 The bounty notification can be seen on top of the radar.

If the marked player gets killed, or the player manages to survive for about an hour, the bounty disappears. Doing a mission may be a way of avoiding getting killed. One can also take his way to the wilderness. If you will survive, whilst on a run - the reward will be yours.

The bounties do not disappear even when you turn off the game. You will still be marked when the game is turned back on. Time does not pass when the game is off. There are also the bounties that are inflicted by the game system itself. For example, if you still one of the super-cars, you may receive a SMS with a threat which later on may cause the bounty to appear. Its figure may differ dependable on the car. Other rules are the same as the rules of the normal bounty.

You have to have got at least Rank 10. If you do, you can call Lester and choose the option of inflicting the bounty. You also need to have some money on yourself.