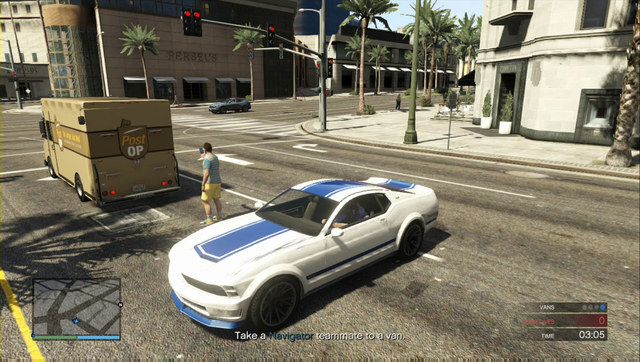 One of the Post-OP vans

This is an exceptionally easy mission, which requires some cooperation, though. Two crewmembers become drivers and they get a navigator to help them. Drive outside of the city, where the navigator should start the Trackify app in his phone. Red dots display on the screen - use the D-pad to mark the way to the nearest destination, for the driver to follow. 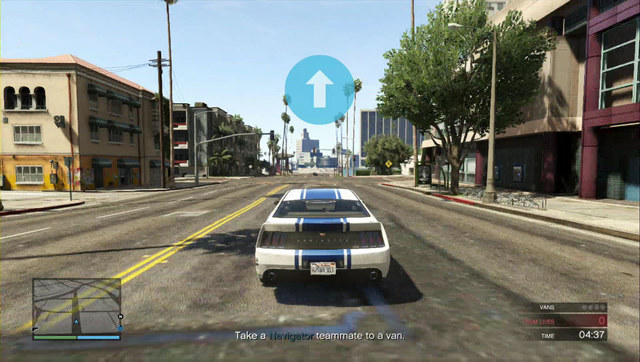 Blue arrows navigate you along the way

The driver will be navigated by means of the arrows displayed in a blue circle. As soon as you get there, you find the Post-OP van - have the navigator take a photo of the license plate, with the phone, and go to the next point.

After you have marked enough vehicles, you receive information on which one you need to steal and deliver to the storage. This is the easy part - the car will be displayed on the main radar and there will be no need for a chase.

This task requires you to split into two teams. As the entire crew, go to the quay, where there are motorboats awaiting. Steer them to the isles marked on the radar. At a distance, you will spot a patrolling police chopper - it is your primary target. The secondary ones are the policemen spread all around the small archipelago. As soon as you have dealt with all of them and reach the marker, you will be joined by the person you are looking for. Take him to the pontoon but, one of the players will have to stand (and may fall out, as a result). Also, the driver can drive him up to the motorboats. Then, steer up the river, until you reach the lake, where you lose the police pursuit. Then, take the man to the destination.

This one is an interesting mission. Three players in one team and a driver. On the van, get to the marked area and attack the men (also snipers) in the alleyway between the buildings. In the meantime, the driver needs to be prepared to get to the black van and steal the gear, after which he returns to the car. The rest of the crew needs to go to the black van and stat escaping. The driver simply needs to deliver the white van and the ones in the black one, lose the pursuit. Then, they reach their marker on the radar to complete the mission.

In spite of simple assumptions, may prove problematic. You need to abduct a truck - to do this, take each your own car (it is even better if these are quire big cars) and form a blockade on the bridge. Then, hide behind the cars and wait for the Merryweather soldiers. In the first place, deal with the chopper, then with all the ground units. No one should try to get the truck before the soldiers are all dead, to prevent the destruction of the car. Finally, on the Insurgent, escort your own truck to the marked area.

The last preparatory mission, before the heist itself. Get getaway vehicles - the bikes. Go to the place of the Lost gang and deal with the members. At the back, there are the bikes. You simply need to get on them and return to the destination. What may be the problem is the numerous blockades, along the way, formed by the gang members, because it is easy to fall off the bikes and die under enemy fire. This is why, while leaving the backstreet behind the club, ride straight ahead, in spite of what the GPS suggests - the majority of the blockades have been formed at the club's exit. This way, you will avoid the greatest threat.

In the last heist, each crewmember with a separate role: crowd control, sapper and hacker, need to know their objectives well. First of all, drive up to the bank and get inside. 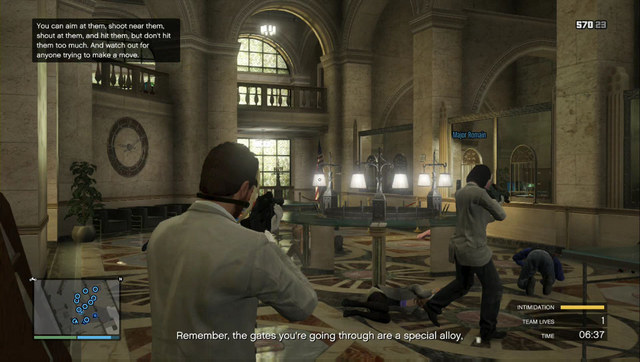 Watch the civilians, if they get too brave, they start the alarm

At the same time, the hacker opens the vault, using the terminal, and the sapper waits to blow up one more security system. Then, they come in, one after another, take the cash and the whole crew heads back to the exit. 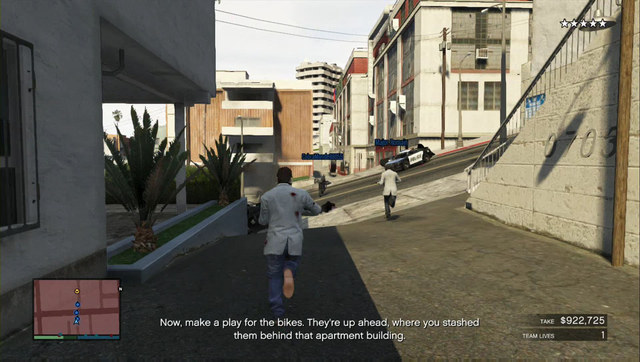 Escape along side alleys and take the motorcycles

You exit all at the same time and shoot at everything that moves. It is best if one of you has a rocket launcher and a minigun. Also, an HMG does the job. As soon as you clear the streets, escape along the side alley opposite. New small police units will keep arriving - now you only require a good machine gun to eliminate the incoming opponents. Also a chopper arrives, which you need to deal with, as quickly as possible. At the first intersection, run right and reach the end, where there are the bikes waiting, as well as boxes with armor. 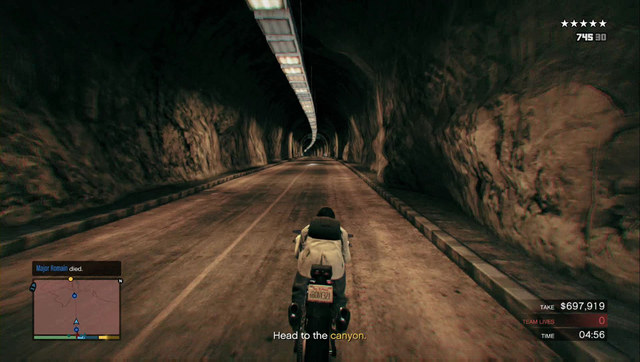 Get on the bikes and head towards the destination, you only have 10 minutes. You can reach the destination separately or in pairs. In such a situation, the passenger will conduct fire. As soon as you leave the city, around the lake, on the bridge, there is a road block, and another one near the destination marker, where you need to ride into the canyon. Then, cross the forest towards the next marker - here, the pursuit is negligible. First of all, make sure that nobody gets off the road, or fall off the bike. 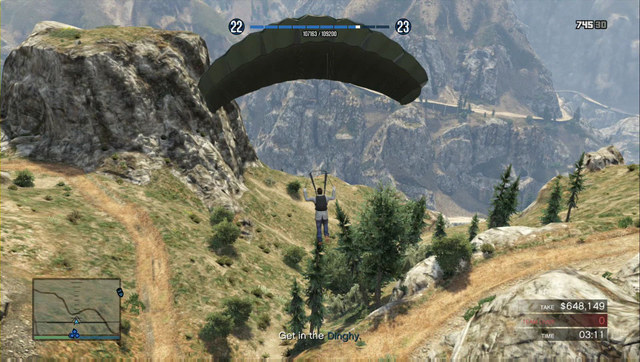 Release the parachute immediately - otherwise, you land too early and you will have to run towards the pontoon

Hint: instead of the bikes, you can take a car - it would be best if you all got into a SUV or an off-road car - it is no good in the city, but outside of it, it gets much better - you can head Northwards, straight away, and take a shortcut up. The pursuit does not reach you there, unless choppers are used.