You will have to invest some of your own money into the second heist, for which to buy gear and prepare yourself. This is 40000$. However, this is an one-time investment - if the mission is failed or it gets interrupted, you will not have to pay any more than that. Before you start the mission, you need to do some preparation. 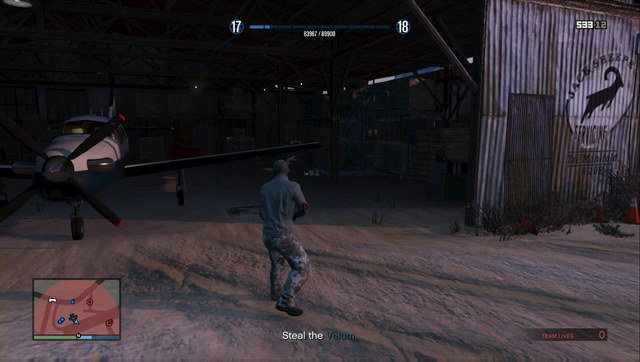 Steal the plane from the hangar

The firs preparatory mission is to get to the McKenzie airport and deal with the gangsters. One of the players (the pilot) walks over to the hangar, in the meantime, and steals the plane. After you have eliminated the first wave of enemies, more will come on cars and they will be trying to block the runway. This is why, it would be good if the pilot is not a total newbie. After you start taxying, cover the plane with everything that you have. 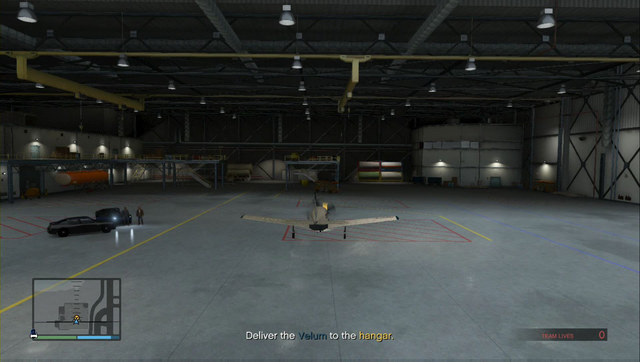 Deliver Velum to the airport hangar

As soon as the plane is aloft, you need to get it safely to the airport in the Southern bay and land it in the marked spot. At the same time, the rest either fights back the gangsters or escape the site. 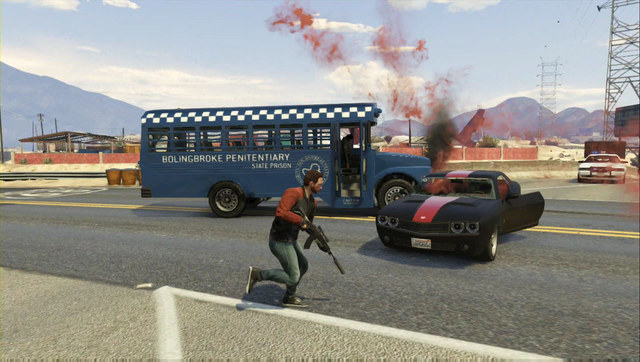 Steal the bus and do not batter it too much

The other required vehicle is the prison bus. This task could take one player only. You play as a team, but each one needs to handle things on their own. Reach the prison bus driving along the boundary of the desert, in the Northern part of the map. It is being escorted by a helicopter so, deal with it in the first place. The rest of the team may get the road block ready, in the meantime, and steal the bus. It is important not to damage it too much, after you steal it, or you fail the mission. Take the bus to the destination. 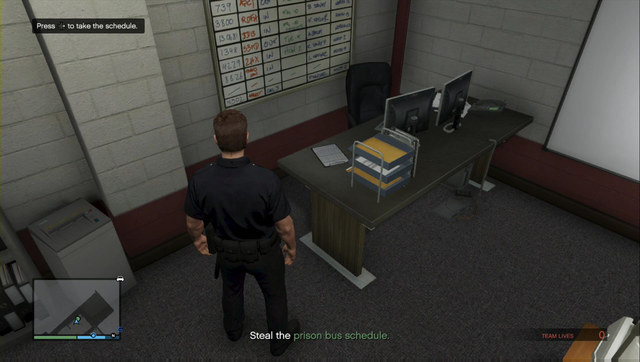 The schedule is on the desk in the corner - you only need to pick it up and leave, without being seen

In the next mission, you are split into two teams - disguised as policemen and thieves. The policemen need to get a police car and lose the tail. Then, head to the police station. If you do not have any police pursuit on you, enter the building, enter the room on the right and take the schedule from the desk. Then, return to the car. 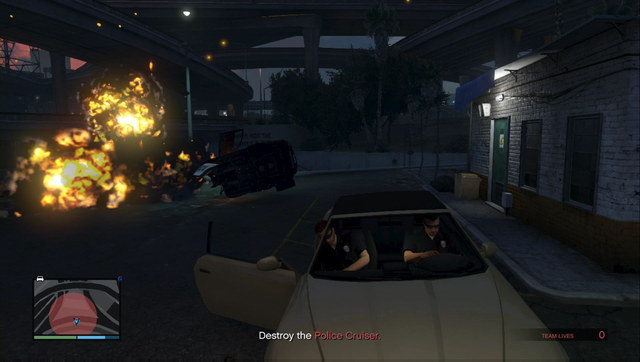 Blow up the police car and escape on the getaway car

You only need to drive the car to the destination, now. There are fuel tanks there - set the car on fire and take the document to your place, which ends this mission. 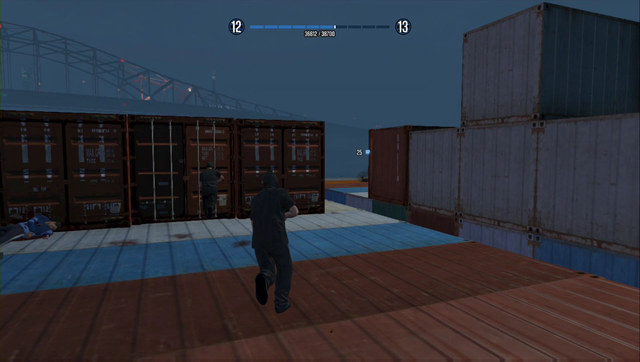 There is more work to be done by the thieves. Reach the docks and go onboard the marked ship. There, fight your way to the bow of the ship, by dealing with enemies hiding behind the containers. 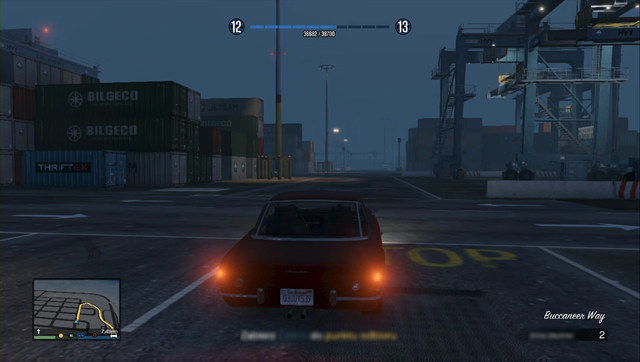 Do not worry about damage - the client accepts the car, as long as it is operational

As soon as you reach the destination, climb onto a container, deal with the remnants and approach the container. During the cutscene, the car will be stolen. Then, get the car to the garage to complete the mission.

Hint: split the crew into 1 policeman and 3 thieves. 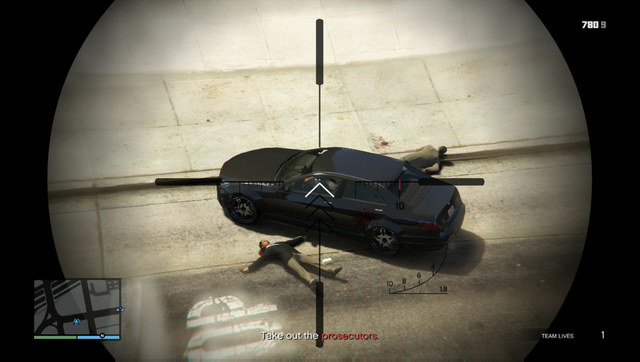 Kill everyone as soon as they get off the car

This mission becomes available only after you have made prior preparations. Two teams need to take out two important people. One of the teams goes to the city center. In the marked area, climb the ladder onto the building. Both of you pack sniper rifles. Wait for the car to arrive. Kill both of the people that get out of the car, simultaneously (and optionally the driver) and escape from the scene immediately. Lots of police will arrive and you still need to steal the documents that the target had on him. After you steal the papers, lose the pursuit and wait for the other team /return to the base. 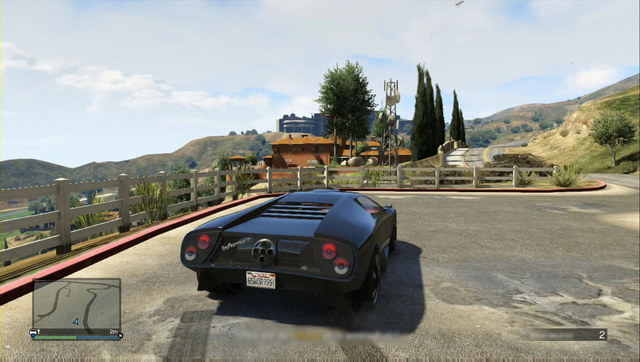 The other team needs to eliminate a lawyer, at his place. The estate is being guarded by security. The game recommends that you do things silently and eliminate the guards in the way that makes it impossible for the rest to find the bodies, nor hear the gunshots. However, if you make some noise, the target will start escaping on foot. 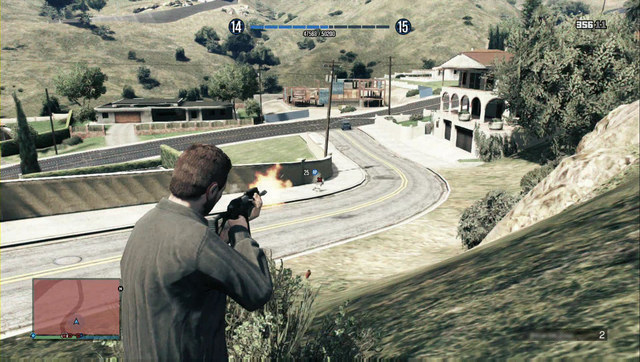 If you prefer to, kill him as he is escaping the estate

You can kill him at any moment, outside of his estate and not bother about the security guards. Lose possible pursuit and meet up with the first team.

Hints: split the team. 3 players go to the city center and 1 to the villa. The first team: have one player wait at the street level, so you can steal the files before police arrive. If this fails, take a fast, or a heavily armored car, drive up to the case and have the passenger grab it. 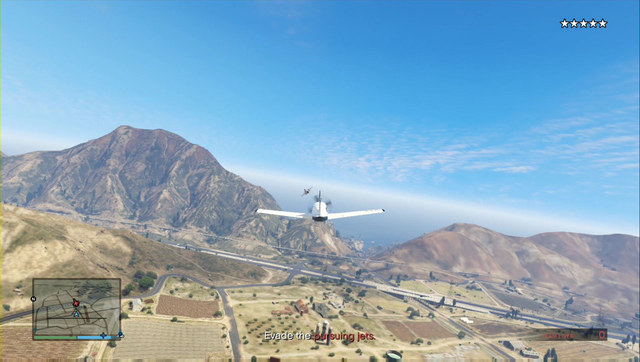 You can follow the enemy planes to prevent being chased yourself

The second part is not that easy. Use all of the preparation objects. The division of the crew is 1:1:2. The first player is the pilot. He first goes to the airport and takes the plane supplied during preparations. Do not drive into the airport, up until you receive the text message that you can, or the police will start chasing you. Fly up to the spot and wait for the prison team to recapture the prisoner. In the meantime, you will be attacked by fighter planes - avoid them and do not let yourself be shot down. 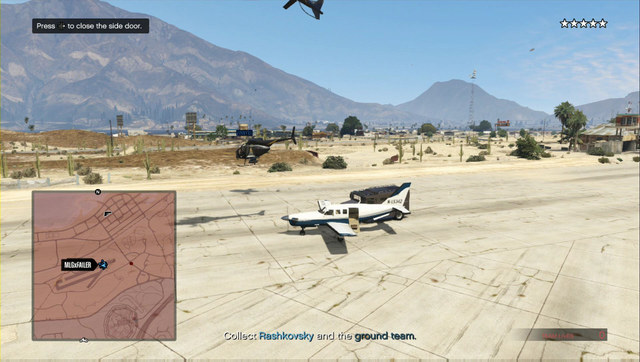 You can land on the airport or on the highway - simply, take the passengers onboard and do not crash

Then, land and take the entire crew (apart from the sniper) and the prisoner (remember to open the side door in the plane), lose the chase and get to the destination.

Hints: before you leave the airport, wait for your time meter to reach 3:30, because the prison crew will not manage to do their job too quickly and, the earlier you reach the destination, the more fighter planes you will have to deal with. The other hint is that if you do not get under fire, take the initiative - get behind an enemy plane and follow it, while mirroring his maneuvers. 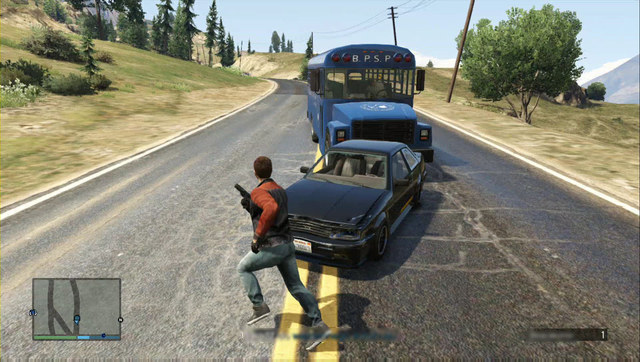 After the driver realizes what is going on, he starts escaping - kill him

The sapper - he needs to do several things: first of all, he steals the actual bus, drives it to the McKenzie airport, and blows it up. Then, he steals the fighter chopper - it is being guarded by a heavily armored Merryweather mercenary. 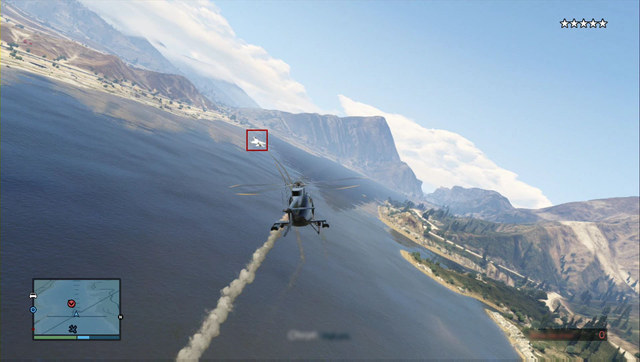 Then, get up into the air and cover the pilot from the incoming planes - homing missiles work best here. The sapper gets to know that when the crew gets outside of the prison walls - get to them to cover them. After the pilot gets the prisoner and the crew onboard, escort them to the destination and then, collect them from the beach and go to the city.

Hints: do not try to help the prison team - you will be shot down over the prison; eliminate the chopper guard with a headshot- do not try to drive him over or he survives. 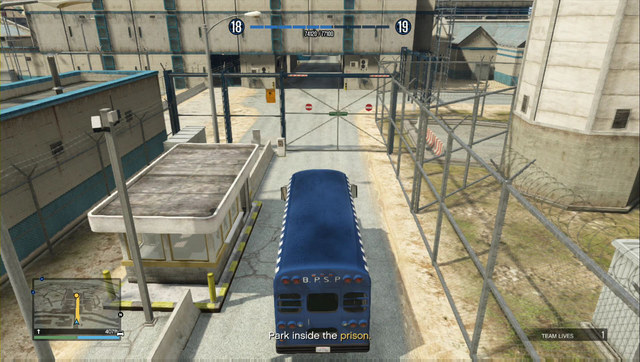 The prison team, i.e. the players disguised as the guard and the prisoner. Take the bus and drive it to the prison. Stop at the gates for control and park the bus in the marked area. The guard is the only one to have a weapon - it is best to start the attack as soon as possible, sooner or later you will have to fight of the guards. The prisoner has no weapon so, he should take one from the nearest policemen. As soon as you find Rashkovsky fight your way to the gate, at which you find an armored car - use it to get to the airport, where you change to the plane.

Hint: it is best to select the strongest crew for this mission, both when it comes to the familiarity with the game and statistics. It is a good thing to complete this part quickly, so the pilot and the sapper do not wait too long.