Just like in the real world, money is essential for survival in GTA Online. Cash can be earned in several ways.

Your primary source of money are jobs. For each finished game you get salary, whose height depends on your score. As far as Deathmatch is concerned, you can get extra cash by collecting the money dropped by killed enemies. 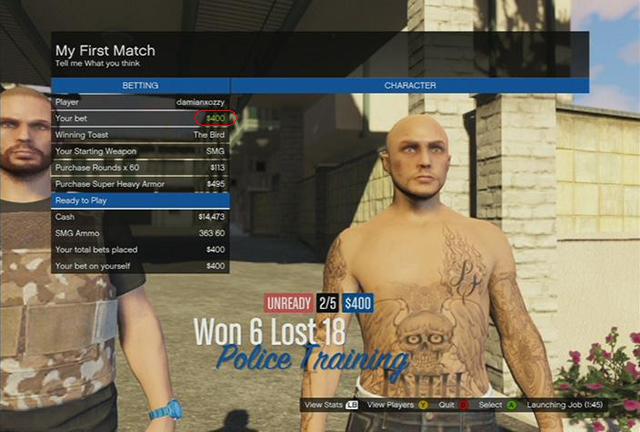 Bets can get you extra money

You can get extra money for jobs, if you win a bet placed on the player who you think may win the game. Of course, you can place the bet on yourself. Note that after you name the sum of money you still have to press A (X360) or X (PS3) to place the bet. When the number is green, it means that the bet is in play. This is shown on the previous picture.

Another way to earn money is to deliver cars to Simeon. Early in the game you get a text message from him with a list of cars he needs. When you find a car from the list, first you have to respray it, as he will not accept it otherwise.

From time to time a message like this will appear on the screen. This means that there is a specific vehicle marked on the map - one of those that Simeon needs. Get this vehicle, respray it in LSC, and deliver to Simon, to get extra money. Remember though - first-come, first-served.

In Los Santos Customs shops you can also sell common vehicles right from the street. However, one shop will not accept an infinite number of cars. To sell a common car, drive to LSC and select Sell option. Before that you may repair the car. This makes little sense though, because the selling price will only rise that much as much you spend on the repair.

To earn extra money, you can rob stores. These are marked on the map with the icon presented on the picture above. 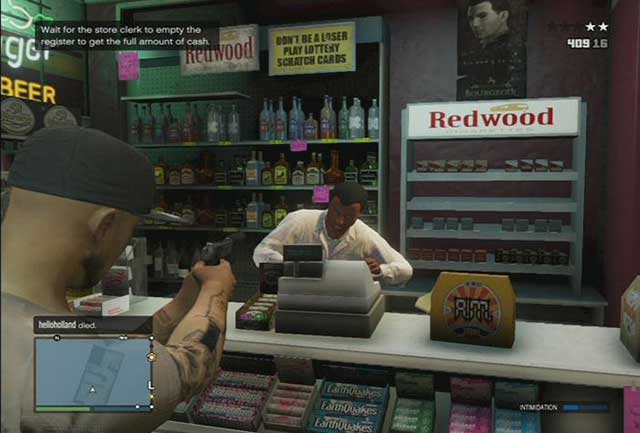 You need to keep a bead on the shop assistant, so he gave you all the money

When you enter a store, draw a bead on the shop assistance. An intimidation bar will appear at the bottom of the screen. When it is full, the shop assistance will give you all the money. Usually a robbery ends with a police pursuit.

If you are currently not doing any job, keep an eye on the information shown at the bottom of the screen. From time to time, there is an equipment supply dropped over Los Santos. This is marked on the map with a green square with a question mark. Remember the rule - first-come, first-served.

Robbing the shop may be made faster by using the headset. All that has to be done is to yell at the clerk. It is also possible to kill him and take the money by yourself. It is important not to take eyes from the clerk even after collecting the many, as he/she may attack you with a gun hidden under the counter (usually it is a sawed-off shotgun). It is best to shoot the shopkeeper in arm to prevent his retaliation. Killing the clerk may increase the number of the stars.