This section of the Grand Theft Auto V game guide includes all information on playing tennis. We explain how to prepare for playing tennis in GTA V, what are the most important rules, and how to properly serve to win. 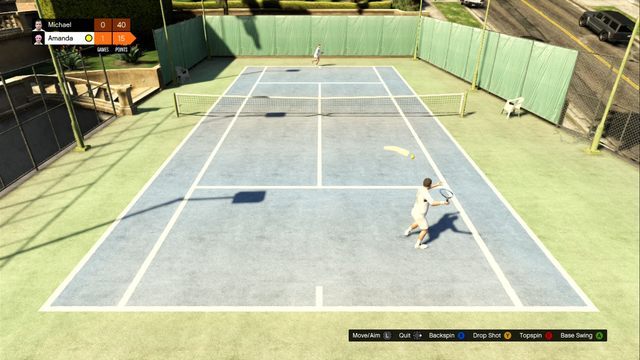 Tennis in GTA V has real rules here. So, gem ends when any of players get 45 points and win a gem ball. 1 set is 5 gems. You get 15 points for every good hit. Gem ball is after getting 45 points: it decides whether you win or not particular gem or set. If both players have 45 points, it is deuce. During that, one of players has to win two balls in a row to win the gem. 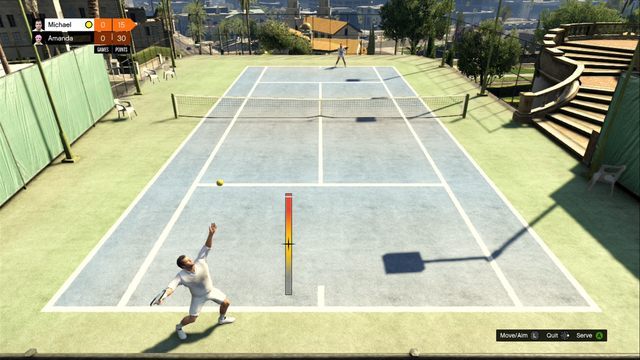 At the end of each gem, you change sides. During the gem one serves all the time. You start serving by pressing A/X. A bar appears. To serve, press A/X again when the horizontal line is in the upper part of the bar. If the ball doesn't get on the other side of the net, you can try again, but three fails in a row means a point for the rival.

Red part of bar is the strongest hit. With left analog you can also aim the hit. If it's strong enough and well aimed, you may get a service ace.

You move on the court with the left analog. It's important to choose the proper position, to get the ball at the time. Try to aim at the side of court opposite to where your enemy is standing. You do so by moving the left analog left or right when you hit the ball. You'll force him to run and make a mistake sooner or later. What is more, sometimes when the ball lands on your side, it has some particular color instead of white. Hitting the ball with a key in the same color is a play which may give you the point in the easiest way. Naturally, it's not obligatory and you can play whatever you like.