This section of the Grand Theft Auto V game guide includes the walkthrough of all 12 flight school lessons. Attending this school in GTA 5 is required to develop your skills in operating aircraft. Each lesson allows you to earn one of three medals and our guide will help you with unlocking 100% of gold medals in the flight school. 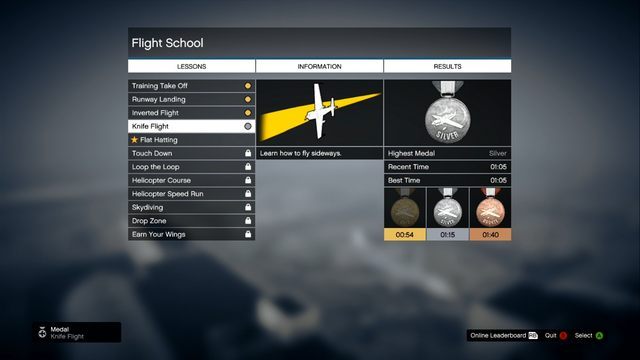 Flight School let Franklin and Michael develop their skills (Trevor has it very good but he also can learn something new). It has twelve missions in which you have to make missions ordered by the instructor. The faster you make it, the better medal you get.

1. In the first mission you just have to start and fly through the two checkpoints. Speed up the plane with RT/R2 and then rise moving the left analog back. When you're in the air, stabilize the flight and fly through your target.

2. In the second mission, you have to land. Fly steadily to the landing site, slide out the undercarriage (L3) and slowing down slowly set the plane on the landing site. But don't stop totally! When you land, move on side. So drive slowly and then turn left using LB/L1.

3. In the third mission, after rising you have to make a barrel and then, three times in a row, fly upside down. First of all, make sure that you're high enough to not hit in any of skyscrapers. When you get on the proper altitude, perform the commends of trainer (notice the bar in the right bottom corner showing when you can make a stunt). To make a barrel, just push the left analog left or right until you make a full rotation.

4. The fourth mission is easy. You have to keep the plane vertically. You do it like the barrel but you have to release the analog earlier to "stand" on the wing instead of making a full rotate. Remember, that when you fly, you increase or decrease altitude with LB/RB/L1/L2 depending on the wing on which you lean on.

5. The fifth mission might turn out to be problematic. You have to fly a rather long route between low checkpoints. Fly easily and steadily and turn on bumpers. Notice symbols on checkpoints because they show where the route goes and let you turn before you even fly through the checkpoint. If you miss any checkpoint, you get a five penalty seconds. Fly steadily and slowly and you should make it without any problems.

6. In the sixth mission you have to make a crash landing on the bridge. There is no time limit, so you can take your time. Try to touch the bridge on its very beginning and close to the middle to not hit the barriers. Then speed up and avoid cars to get to the finish.

7. In the seventh mission you have to make a loop. First of all, head your plane towards sea, not towards the city. When being there, move your analog back when only you see a red bar in the right bottom corner of the screen. It appears a moment before trainer's command, so if you begin it earlier, you spare few precious seconds. Pull down until you make a full turn. It's important for plane to fly steadily, so try not to move analog on sides. The last trick may be problematic. Here, you have to make a half of loop and change it into a barrel. It may need several attempts.

8. In the eighth mission you start controlling the helicopter. And for the beginning, more checkpoints to get. It should be somehow easier than the similar mission with a plane. Remember about the altitude (control it with triggers). You don't have to hurry too much, fly calmly and you should make it in time for a gold medal. On your way you find many opportunities for Under the Bridge challenge, but do it only if you really feel your helicopter. Landing may be problematic. Remember to steady your vehicle by slowing down and flying in place. Then, slowly put him down.

9. The ninth mission is another flight with a helicopter, but this time you have to hurry a bit, and some of checkpoints really vary in mean of altitude. It's mission which requires a lot of practice, so you should train a lot to make it. You have to perfect balance between increasing and altitude and speed, and also skillful landing. The most important thing is not to get frustrated and try again and again. After a few attempts it should be relatively easy.

10. The tenth mission is quite easy - you have to land after parachute jump in the particular place. The best is to open a parachute after few seconds of flight to have as much time and control over where you fly to. Remember that you can speed up and slow down and turn under bumpers. Try also fly on the circle from the front to make it easier. When you're close to it, trigger focus on the landing site (B/wheel) for even better control.

11. The eleventh mission needs you to land on a riding truck. First of all, notice the traffic lights and try to fly equal to them. Landing on the truck is a task for the left analog. It may require several attempts, but this mission isn't really that hard.

12. The twelfth mission is a return to the plane and another checkpoint flight. This time, you have three types of them. Yellow standard, green ones through which you have to fly vertically and blue for upside down flying. Notice a plane drawn on the green checkpoints and move the plane according to the drawing. It's not a requirements and you can fly also other side, but following drawings will make easier for you to take a turn before another checkpoint. This mission may seem problematic, but it's all about learning and remembering the sequence of turns. After several attempts you shouldn't have a problem with finishing it. If you don't miss any checkpoint, you should easily get a gold medal.