This section of the Grand Theft Auto V game guide describes the best weapons in the game. After reading the below, you'll learn what types of weapons are available in GTA 5 and which weapons are best for your characters. 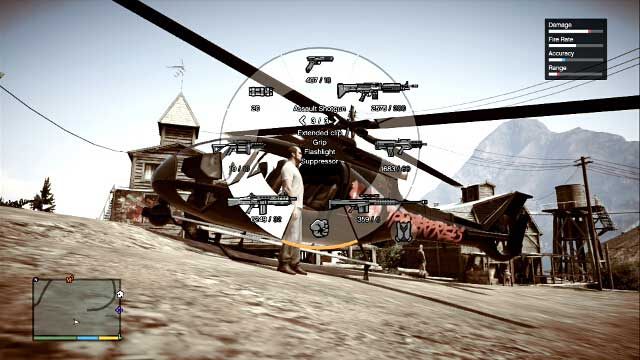 You can choose the tools you carry by pressing LB/L1 and then switch between weapon types. When you have more than one types of the same weapon category, you switch between them with left and right direction buttons.

Notice also where you're firing. When you shoot, small red area will appear on the radar - it shows the range of noise of your weapon. Each enemy will react if he can hear it. What is more, if there is a police in range of it, it also gets interested at firing man. You can use muffler to decrease risk of getting busted.

If you plan to fight hand-to-hand, purchase a knife, which is by far the best melee weapon. Nightstick, a hammer or a baseball bat are slower, less effective and harder to acquire. The knife clearly distinguishes itself. Furthermore, it is very cheap and available virtually from the beginning of the game. Along with the update accompanying the release of the game to new platforms, an ax has also been added. The fight with it will be especially sanguinary, because the inflicted wounds are gruesome and there is no shortage of blood. It is difficult to asses whether it is better than good old knife but one thing we know for sure - it introduces a breath of fresh air and allows you to play a racial butcher-killer. It will be accessible in stores when you complete the mission Trevor Philips Industries.

The best choice within pistols is AP Pistol. You have to increase its clip size. It's a great weapon, maybe even better than semi machine guns! You can rely on it if you don't have an access to rifles. Stun gun is more for fun than any other actions. You can ignore it, but it may be useful when you don't want to kill someone (like in Trevor's mission for Maude). But it has a very low fire rate (fires one for about four seconds).

Those babies are rather unnecessary in your arsenal. If you have AP Pistol, it's much better than all of them. But if you want to use those, get to the Rockstar Social Club. Then, you'll obtain for free Assault SMG in Ammu-Nation for each character (it should hang on the wall on right).

Shotguns are short distance weapon. Ideal for in-house fights for example. When enemies are close to you, switch to them immediately. The most basic version, available from the very beginning, deals huge damage, which kill almost everything. What is more, it can be muffled! The minus is, of course, need of reloading every time. But after all, it's not worth changing it until you get the last one shotgun, Assault. It deals less damage, but it's fully automatic and will be a tool of doom in small rooms.

Basic long-range weapon. When you can get a new model, buy it immediately and get all upgrades. The best model (Advanced Rifle) will be available very late, but you can get it in the village of Altruist Cult (place where Trevor can deliver hitchhikers).

There are only two types available. Regular (MG) and upgraded one (Combat MG). But they are not that much better from rifles. They deal similar damage with smaller rate of fire and less accuracy. But they have much bigger range and clip size. In general, they are better solution before you lay your hand on Advanced Rifle. But when you get the last one and upgrade it, it will be much better from Combat MG. Unless you're fighting many enemies at once and don't have a time for reloading.

Powerful weapon to take down enemies from a distance. Basic sniper rifle may be muffled what makes it a little ahead comparing to the heavy version. Muffler decreases damage a bit, but it won't affect effectiveness that much. But the heavy version can pierce armor, having a smaller clip size. In general, the regular model is more universal and will work almost always, but if you have troubles with aiming at heads you can buy the heavy version.

The top heavy caliber weapon is definitely a grenade launcher. With it you can easily handle any situation quickly eliminating the threat. It is fast, has a decent range, and above all, it is extremely effective. It will destroy almost everything in one shot (in fact only tanks may need more shots). The biggest downside is the limit of ammunition that you can carry, but twenty shots is still more than you may need in almost any situation. The RPG inflicts slightly more serious injuries, but its slowness limits its possibilities. Minigun can easily slash enemies, but you cannot hide behind the curtains with it, so you will be very sensitive to any shots. Railgun, or electromagnetic cannon, the brand new toy which we will be able to use in the new version of GTA after - according to official information - completing mission called Minor Turbulence (you have to go to the gun store and shell out some money). It allows you to strike powerful but requiring reloading shots that smash almost to smithereens all hit objects. We purchase it as soon as possible.

You should always have a pack of Sticky Bomb with you. They are very useful explosives, especially to use from inside the car. And especially when you're playing as Franklin. You ride to the target you want to blow up, turn on Special to slow down time, aim, throw, drive a bit and detonate. It's very effective technique or all chases when your target is driving away. It will also work on police car chasing you. Sticky Bombs are better than grenades in all aspects. Remaining explosives aren't that much useful. Grenade may be useful during shootings with many enemies on a small area and tear gas when you don't want to kill your target - but in that case it's better to use a Stun Gun.