Crashed UFO at the bottom of the ocean - one of four flying saucers that you can encounter in the game. To find it, you are going to need a submarine.

A crashed plane - At the bottom, you will find here a planewreck. Around here, there also is a bag with $12.000 inside.

A face - You can find here a face painted on the slope of Mount Chilliad. You can only admire it while flying, e.g. a helicopter by.

UFO on Mount Chilliad's peak - Another flying saucer. To see it, you first need to complete the game in 100%. The saucer is only visible at 3 a.m. during a storm (it is best to use a cheat code to change the weather)

A ghost - On Mount Gordo, Between 11 a.m. and the midnight, you can find the ghost of a murdered girl and a bloody caption reading JOCK. Once you come close to the apparition, it will disappear. If you search for information, about Lenora Johnson (by finding 50 letter-scraps you solve the mystery of her murder), on the web, you will find a link referring you to another story ("Blood on the Rocks). You can learn from it about the allegations that Jock Cranley, who is a current candidate for senator in SA, murdered his wife by pushing her off the cliff. After you start a string of missions where you need to obtain celebrities' belongings, also Trevor is taken for Jock Cranley by a couple scavenging in the trashcan.

Thelma i Louise - arguably one of the best Easter Eggs around the game. When you are flying in this region around 7 p.m. and 8 p.m. (this does not happen if you are on the ground) you will witness an exact reenactment of the legendary scene from the Thelma and Louise movie ending.

UFO over Fort Zancudo - Another flying saucer. Very high above the clouds. Requires you to complete the game in 100% first.

Beam me up! - In the skate park in Sandy Shores You will find a mural with the famous quotation from Star Trek.

A stone and a poem - On one of the stones, you will find eights and a poem engraved - "One is done, Two was fun, Three tried to run, Four called mom, Five's not alive, Six is nix, Seven's in heaven, 8 won't wait". It is an allusion to Freddie Krueger's poem in the Nightmare from Elm Street movie series.

UFO over Sandy Shores Yet another flying saucer. It is very high above the clouds. This one also requires you to have completed the game in 100%.

The Hatch - at the bottom of the ocean, you will find a bunker hatch from the LOST TV series. There is some light inside, which is an allusion to the episode entitled Deus Ex Machina, where there light turned o after hitting the hatch.

The Playboy residence - an exact copy of Hugh Hefner's residence. In the evening, you can find a lot of scarcely dressed girls at the back.

Graffiti in Chamberlain Hills - On one of the buildings, you can find a huge mural reading "Welcome Back - We missed you last time". The person on the painting is wearing Grove Street Gang stripes. This is, of course, an allusion to GTA: San Andreas. Close to this one, you can also find a Nyan Cat graffiti, who is the main character in the famous meme and a YouTube movie.

Grand Theft Auto V is full of different references, secrets and curiosities. On the map you can find the most important things to see. Additionally, you can find much more subtle Easter eggs.

When Trevor drives somebody down, he sometimes grants himself with ten points. In the first game of series, every driven down pedestrian gave you ten points.

Z-Type car which Franklin has to steal for Devin, and later can be bought for 10 millions of dollars, is a vehicle of Zaibatsu gang from GTA 2.

When Michael get to his home, he may sometime say "Daddy's back, you bitches". Those words begin GTA IV.

Another reference to GTA IV: during preparation to jeweler robbery, you may hear that Lester says about a "man from Eastern Europe" who has stopped his activities recently. What is more, at Michael's, Jimmy is browsing profile of Niko on LifeInvader on his laptop.

You can also find here many characters from the previous part of Grand Theft Auto. Johnny Klebitz is killed by Trevor when you meet him for the first time since prologue. Packie can be hired when you meet him in the random event and while making Epsilon missions, you run into Marnie.

Choosing 9485550100 on your phone, which is a number of song identification in GTA IV you'll hear a modem sound.

In mission Derailed, where Trevor on the motorcycle has to jump onto the train, one of additional tasks is called "Better than CJ". It's a reference to the similar mission from San Andreas, where CJ also had to race with a train.

During the mission Hood Safari you visit Groove Street, which is perfectly known to fans of San Andreas. What is more, approaching it you may notice three persons riding bikes in the opposite directions. They look like CJ, Sweet and Big Smoke. It's a reference to one of first missions in SA where you, as CJ, followed the remaining duet.

References to other games

In-game you can find a lot of references to other game from Rockstar, which is Red Dead Redemption. On the bookshelf at Franklin's, you can find, among others, "Read Dead" written by J. Marston (main character). What is more, many names in this game is borrowed from RDR, like Escaler bus, or streets Cholla Springs Avenue and Armadillo Avenue.

In Sub Urban you can buy a hawaiian shirt from Max Payne 3.

Game, in which Michael's son is playing, is a parody of all games similar to Call of Duty

In this game you can also find billboards advertising the new reality show, called Rehab Island. Its logo is very similar to the polish game logo - Dead Island.

Rockstar references also to its direct rival, which is a series Saints Row. While driving around you can hear citizens saying "City of Saints gonna struggle,. Los Santos ain't in no trouble".

References to the films

Trevor's hideout in Floyd's apartment is almost a copy of Melanie's apartment, one of character from Jackie Brown by Quentin Tarantino.

In one of missions for Devin, Franklin has to steal JB 700 car which is a copy of Bond's car from Goldfinger. Its very name is also a reference to agent 007.

The way Michael destroys house in which tennis trainer is hiding was used by Riggs in Lethal Weapon 2.

If you choose a sneaky approach during the jeweler robbery, you'll have to steal exterminators car which has a sign "It's A Bug's Death" on the side. It's a reference to A Bug's Life.

When you take a bus trip around the city, one of the stops is a city hall. Guide will tell you that it was a place of final in the film Invasion: Los Santos. It's a reference to the Battle: Los Angeles.

The device with which Omega scans Franklin and using which Michael alien artifacts for Epsilon is similar to the device from Ghostbusters. 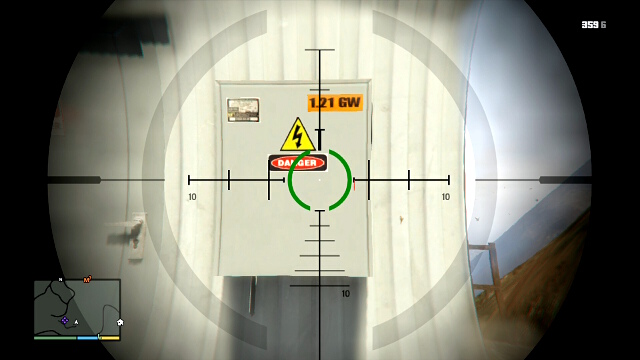 On the generators in the whole San Andreas you can see a stick note informing that they generates 1.21 GW. It's an energy required to power up Delorian in Return to the Future.

Subtle approach to The Big Score is inspired by the film The Italian Job.

In the cinema studios you find a picture with Elvis, Marilyn Monroe, John Wayne and Charlie Chaplin.

In the clothing shops you can buy, among others, vest of main character in Drive and clothes of Jack Torrance from The Shining.

In the Prologue, you can find a frozen alien under the bridge through which train is coming. It's the first of many references to UFO you can find in this game.

During the Predator mission, when Michael uses sniper rifle to find and kill O'Neill brothers, you can run into a Big Foot in the forest.

Referring to the Goatse meme, some of taxi cabs have a 80AAT533 number.

Property name Smoke on the Water is a reference to the famous song of Deep Purple with the same title.

In the Lester's hideout you can find his figures collections. There are for example Master Chief from Halo, Superman and Han Solo.

You can find also here parodies of popular social services. There are, for example, LiveInvader (Facebook) and Bletter (Twitter). There is also a parody of MySpace, called MyRoom. When you get on its site (myroomonline.net), you can read that back in the 2008 it was leader of social services and now is totally deserted because creation of the LiveInvader.

While surfing in the Internet, the middle finger of the cursor is slid out.