This page of the Grand Theft Auto V guide has the walkthrough for the ending C - The Third Way. Our GTA 5 guide explains how to keep all three main characters alive as well as kill Stretch, Steve Haines, Wei Cheng and Devin Weston.

The list of all endings can be found on a separate page.

Way to unlock: After you meet Devin Weston (Finale - introduction) you need to select variant C.

Additional information: The mission connected with variant C is definitely the longest and the most difficult. In its initial part, you will be required to fight a very demanding battle in the foundry. Its further fragments are, fortunately, easier a bit and they assume that you eliminate Stretch, Steve Haines, Wei Cheng and Devin Weston.

Note- I recommend that you prepare yourself appropriately before beginning this mission. I recommend that you equip all of the protagonists with armors. You should also make sure that Trevor has a sniper rifle in his inventory (a suppressed one would be best), and Franklin has sticky bombs. 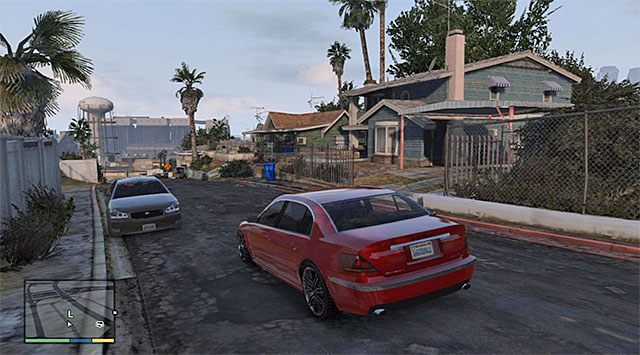 While playing as Franklin wait until he contacts Lester. After you have listened to a short conversation, drive to Lester's house, which is located in the South-Eastern part of Los Santos, in the El Burro Heights district. After you get there, you will watch a cutscene of the discussion concerning the solution to the problematic situation that Franklin has gotten into. 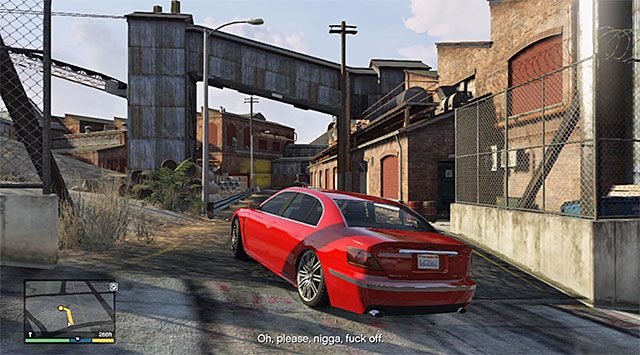 The driveway to the foundry's premises

Leave the house and wait for Franklin to contact Lamar. Reach the area where Lamar's house is located, thanks to which the protagonist will be able to take him for a new mission. The next place that you need to reach is the foundry located to the East of Lamar's house in the Murrieta Heights district. Enter the foundry and reach the spot where you meet Michael and Trevor. 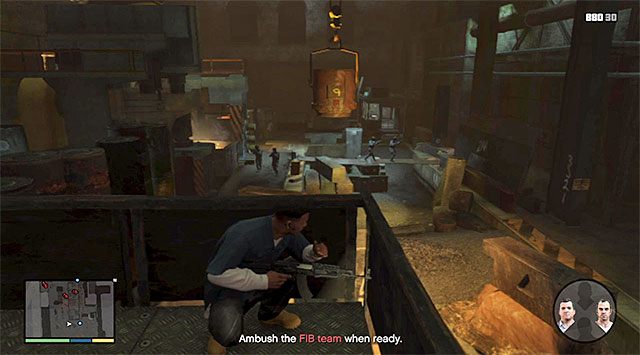 Right after the conversation between the protagonists, there will start a major battle with members of an FIB task force taking part in, in the first place, who will be then joined by the Merryweather mercenaries. Note that you can freely cut between the protagonists and the choice of who you want to play as, currently has no significance. Franklin will be initially occupying one of the upper balconies, on the left of the place where the most recent conversation took place. 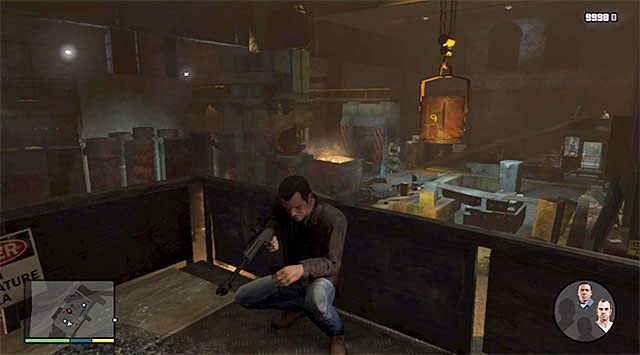 Michael will, at first, occupy the balcony located in the spot where the last meeting took place. By default, he is using a heavy sniper rifle which, although it has large firepower, unfortunately needs to be reloaded after each shot. As a result, you should consider selecting another scoped weapon from the inventory (e.g. a good assault rifle). 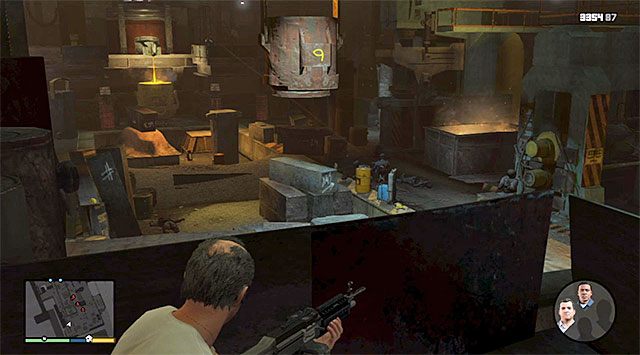 Trevor will at first occupy a small roof above the entrance to the foundry, which is a perfect place to surprise the enemies appearing below him. When it comes to the weapon, by default he is using a heavy machine gun and it is a good idea to stick to it, especially that the gun is compatible with Trevor's fry mode. 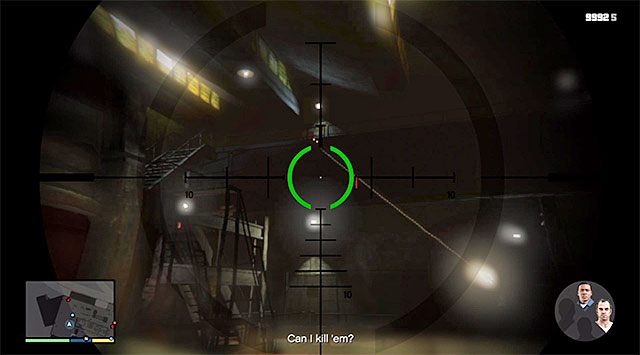 Watch out for the enemies approaching from the upper balconies

At first, the enemies will be appearing at the foundry's lowest level, although you need to realize that there will be a few Merryweather mercenary groups to approach from the balconies above, located on the left of the places where Franklin and Michael are hidden. It is best to eliminate these enemies with well-aimed shots from a scoped weapon at the moment at which they position themselves at the balustrades. 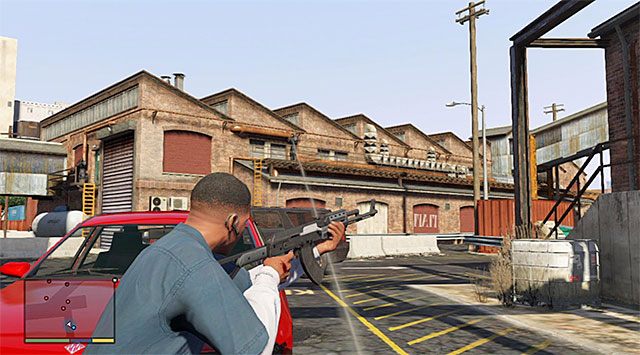 Continue fighting until you receive from Lamar an request for help with fighting back the enemies that appeared outside of the foundry. Cut to Franklin, clear the area of the closest enemies and set out with help only after that. After you leave the foundry's main building, hide behind one of the covers and start firing at the enemy forces. You should watch out here for the enemies hiding behind the cars, as well as for those occupying the balconies above. 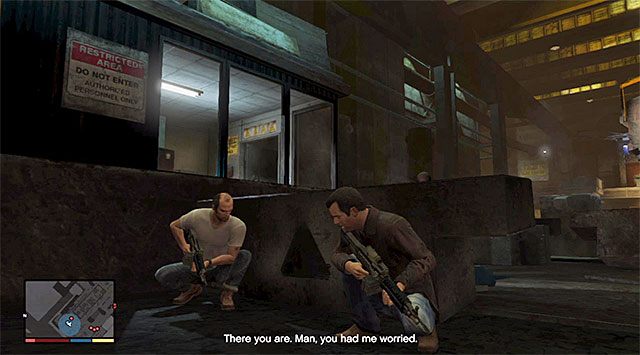 The wall with Trevor skulking behind

The next highlight of the fight will be losing contact with Trevor. Cut to Michael, and just like earlier, start by dealing with the enemies staying at the foundry's lowest level. Only then, jump over the balustrade and get to the corner where Trevor used to be. This will allow you to find out that Trevor is now taking cover behind the wall on the lower level. Join him and start eliminating the successive enemies(you can now cut to Trevor). 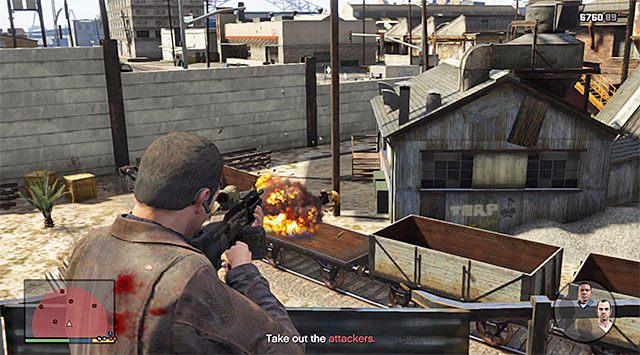 After you have eliminated all of the enemies, while playing as Michael or Trevor walk outside of the building. The game will also unlock Franklin at this moment, as a result of which you will be able to cut between the playable characters freely. You should remember to use covers here and also look out for the opportunities to blow up cars. You should also handle the single chopper, by shooting it down personally, or waiting until either of the allies will deal with it. 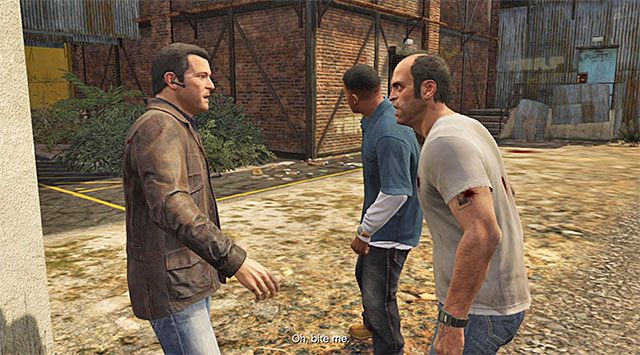 Ultimately, you need to get rid of all of the FIB employees and Merryweather mercenaries, who attacked the foundry. You need to set out to the foundry's cargo bay with your current character, which will result in the playing of the cutscene in which further part of the mission will be discussed. The protagonists need to go to different locations to eliminate three key targets - Michael will have his to kill Stretch, Trevor will have to deal with Steve Haines and Franklin with Wei Cheng. 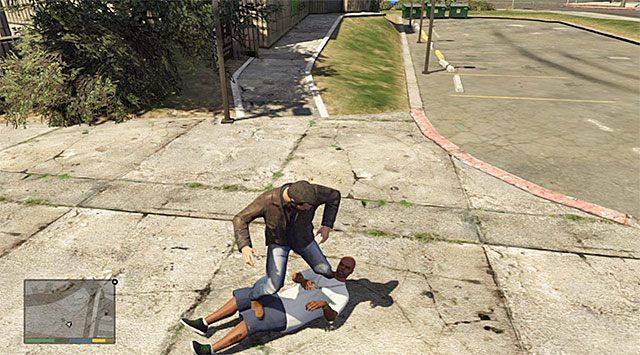 I recommend that you first cut to Michael, because his target (Stretch) is located within the shortest distance of the foundry, in the Strawberry district. After you get there, get out of the car, approach Stretch and start firing at the gangster that accompany him. Try not to shoot Stretch himself, because this would make you unable to complete this mission in 100%. The best way to deal with Stretch (the above screenshot) is to catch up with him and fell him down to deal with him in melee fight without getting him the opportunity to land a single blow. After you have eliminated this character, return to the car and start your escape. You can attempt to either escape the Ballas that are chasing you, or lay down fire on their car in an attempt to shoot the driver. 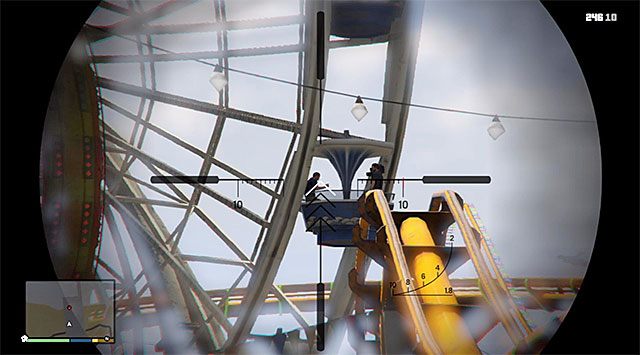 I recommend that you now cut to Trevor. Steve Haines is staying near the Del Perro promenade in the western part of the city. After you get there, it will turn out that Haines is being interviewed inside one of the cabins of the Ferris wheel. Stop in the spot where you will have good visuals on the Ferris wheel and, follow the instructions and do not come too close to it. Select the sniper rifle from your inventory (best if suppressed) and target Haines. Try to hit Steve on the head (the above screenshot) because this is required to complete this mission in 100%. After you are done, get quickly into a car and drive away from the site, while losing the police pursuit that could, in the meantime, set out to catch Trevor. (use the beach or side alleys). 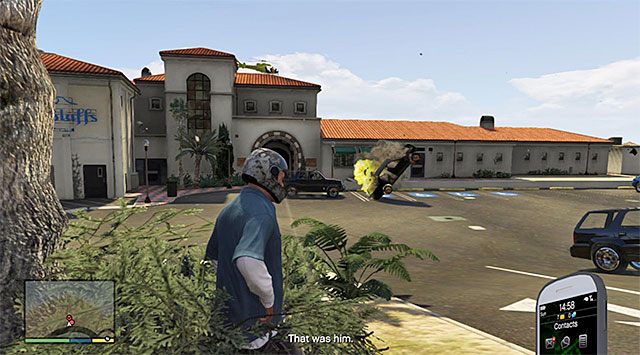 You can now cut to Franklin, who should be on his way to the Pacific Bluffs club, located to the North-West of the city. Stop on the highway, drive up to the club, carefully, and throw a sticky bomb towards We Cheng's limo (using explosives is one of the requirements to complete this mission in 100%). Quickly detonate the charge (the above screenshot) and start your escape. Just like in the case of the event with Michael, it is a good idea to eliminate the driver of the vehicle that is chasing you, thanks to which you will shake off the pursuit earlier. 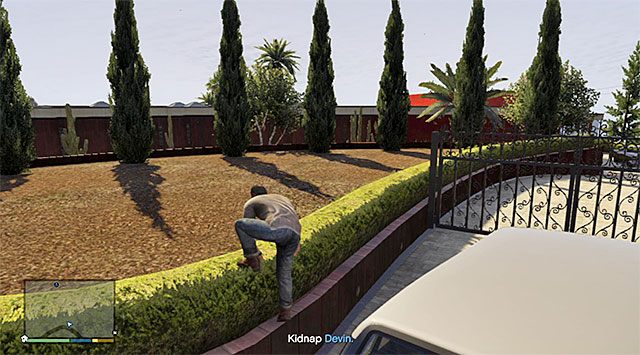 Walk around the gate to Weston's villa

Towards the end of this mission, you will have to abduct Devin Weston who is staying in the villa on the Tongva Hills. It is going to be Trevor who will be responsible for that. Devin is surrounded by armed bodyguards and, although you could eliminate some of them from a safe distance, I recommend that you instead sneak up there. Gain access to the villa by jumping over the hedge located to the left of the main gate. 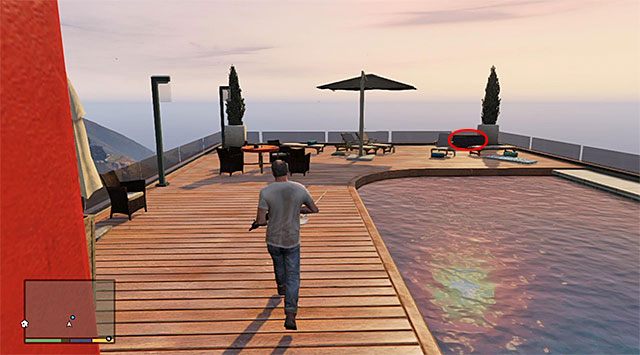 Along your way through the estate, you can make use of a suppressed weapon and avoid raising the alarm although, even if the bodyguards notice Trevor, nothing bad will happen. Continue around the estate until you reach a large balcony. Devin is hiding in the container shown in the screenshot. 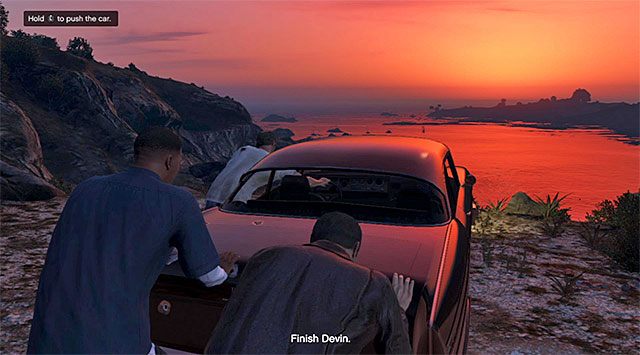 Push down the car with Devin inside

After you watch the cutscene, wait for Trevor to get into the car with the abducted Weston (Declasse Tornado). Drive towards the beauty spot in the North-Western part of the map, right next to the Sonar Collections dock (one of the purchase-able estates). The last thing to do is lean the analog stick up, so that the protagonists can push the car, with Devin trapped inside, off the cliff.

Rewards and challenges for ending 3 - The Third Way